How does Obama Plan to Sell the Iran Nuclear Deal?

How does Obama Plan to Sell the Iran Nuclear Deal?

He only needs to convince 180 people. 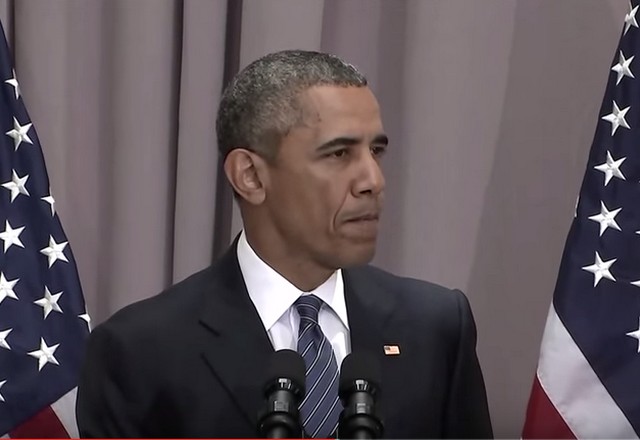 The approach of the President Barack Obama and his administration to the nuclear deal with Iran has been one of knocking down straw men and vilifying opponents of the deal as beholden to lobbyists, following mindless partisanship, and working against America’s national security. These are “dog whistle” remarks, which have brought out a rather nasty response Sen. Chuck Schumer’s (D – N.Y.) decision last week to oppose the deal.

The administration’s nastiness even earned condemnation from Tablet Magazine:

This use of anti-Jewish incitement as a political tool is a sickening new development in American political discourse, and we have heard too much of it lately—some coming, ominously, from our own White House and its representatives. Let’s not mince words: Murmuring about “money” and “lobbying” and “foreign interests” who seek to drag America into war is a direct attempt to play the dual-loyalty card. It’s the kind of dark, nasty stuff we might expect to hear at a white power rally, not from the President of the United States—and it’s gotten so blatant that even many of us who are generally sympathetic to the administration, and even this deal, have been shaken by it.

But I think it’s a mistake to think that Obama’s strategy is counterproductive because it won’t build support for the deal.

I don’t think that the president’s approach to the deal is working to convince more and more Americans to support the deal. Indeed polling seems to indicate that the more people learn about the deal, the less they like it.

But Obama’s strategy isn’t to address the public’s skepticism with the deal, it’s to consolidate the support of his hardest line supporters. Obama only needs to convince 180 people to support the deal (146 in the House and 34 in the Senate to block an override of his veto) and most of those are probably leaning towards supporting the deal. (I believe I wrote 209 in an e-mail last week, but I made a math error or two.) He doesn’t need them to be absolutely convinced that the deal is good from an American security standpoint, he just needs them to believe that there’s no alternative, that they’re on the side of angels and that the other side doesn’t have America’s best interests in mind.

The “no alternative” argument seems to have swayed both Senators Tim Kaine (D – Va.) and Kirsten Gillibrand (D – N.Y.)

But a look at Schumer’s arguments against the deal, it shows that he doesn’t take the administration’s arguments at face value.

First, there are those who say the inspections are not strong enough because inspectors can’t go anywhere in Iran at any time with no notice.

Well, here’s the truth: Inspectors will be allowed daily access to Iran’s key nuclear sites. If there is a reason for inspecting a suspicious, undeclared site anywhere in Iran, inspectors will get that access, even if Iran objects. This access can be with as little as 24 hours’ notice. And while the process for resolving a dispute about access can take up to 24 days, once we’ve identified a site that raises suspicion, we will be watching it continuously until inspectors get in. And by the way, nuclear material isn’t something you hide in the closet. It can leave a trace for years. The bottom line is, if Iran cheats, we can catch them — and we will.

In the first ten years of the deal, there are serious weaknesses in the agreement. First, inspections are not “anywhere, anytime”; the 24-day delay before we can inspect is troubling. While inspectors would likely be able to detect radioactive isotopes at a site after 24 days, that delay would enable Iran to escape detection of any illicit building and improving of possible military dimensions (PMD) – the tools that go into building a bomb but don’t emit radioactivity.

Furthermore, even when we detect radioactivity at a site where Iran is illicitly advancing its bomb-making capability, the 24-day delay would hinder our ability to determine precisely what was being done at that site.

I know that Obama dismisses people who question Secretary of Energy Ernest Moniz, but Schumer here is citing nuclear scientists who are outside the administration.

Moniz has been citing the case of the Kalaye electric company as proof that radioactivity can be detected even after Iran has sanitized a suspected nuclear site. (This is the 2003 incident that he has often referred to.) Schumer was citing the findings of David Albright and Olli Heinonen, who, unlike Moniz, were involved in weapons inspections. Albright has also said that in the case of Kalaye that the reason radioactivity was detected was because Iran was careless in sanitizing the site and that “They are practiced at cheating. You can’t count on them to make a mistake.”

Schumer also pushed back against Secretary of State John Kerry’s assertion that without the deal Iran will become a nuclear threshold state right now instead of in 10 to 15 years.

Supporters argue that after ten years, a future President would be in no weaker a position than we are today to prevent Iran from racing to the bomb. That argument discounts the current sanctions regime. After fifteen years of relief from sanctions, Iran would be stronger financially and better able to advance a robust nuclear program. Even more importantly, the agreement would allow Iran, after ten to fifteen years, to be a nuclear threshold state with the blessing of the world community. Iran would have a green light to be as close, if not closer to possessing a nuclear weapon than it is today. And the ability to thwart Iran if it is intent on becoming a nuclear power would have less moral and economic force.

If Iran’s true intent is to get a nuclear weapon, under this agreement, it must simply exercise patience. After ten years, it can be very close to achieving that goal, and, unlike its current unsanctioned pursuit of a nuclear weapon, Iran’s nuclear program will be codified in an agreement signed by the United States and other nations. To me, after ten years, if Iran is the same nation as it is today, we will be worse off with this agreement than without it.

Iran is a much weaker position now than it will be after 10 to 15 of the agreement. There is a risk that Iran could reach breakout time without the deal, but there is a certainty that it will after ten years – even Obama has admitted as much – and then it will be a lot harder to do anything about the threat.

These were two very strong arguments from Schumer, but Obama wasn’t addressing himself to people who might listen to Schumer. Obama was addressing the true believers and he believes he has nearly enough of them to sustain a veto.

This approach is working even with politicians who have announced support for the deal despite they’re having an obvious disagreement with president. In the American University speech, Obama said:

I’ve had to make a lot of tough calls as President, but whether or not this deal is good for American security is not one of those calls. It’s not even close.

Do Kaine and Gillibrand believe that the call wasn’t even close? If they do I hope they come out and say so. If not they have an obligation to explain why they support the deal despite such a fundamental disagreement with the president on its value.

Seriously, at this point in time, NOBODY can believe what this lying rat-bastard says.

Looking back, virtually everything he ever said was a lie.

He knew he wouldn’t be a “post-partisan President,” more like “MOST” partisan ever. And he knew you couldn’t keep your doctor or health plan, and should have known costs would expand.

The only honest thing he ever said was, “Under my plan, energy costs will necessarily skyrocket.”

The worst is yet to come.

If he manages to stymie one house (below veto override threshold) doesn’t Obama win? So he really only needs to win in the Senate (hence why the Schumer defection has his worried).

Good point, I guess my math is still deficient.

This again?! If you think Corker-Menendez helped 0bama, please explain how. It didn’t hurt him very much, but it was the best that could be achieved at the time, and it’s better than nothing, which was the only alternative. There was a serious effort to get 2/3 of each house to block a bad Iran deal in advance, but it failed. The numbers just weren’t there. Coker-Menendez was the best that could be done; it only blocks the deal for 60 days, or 10 days from the veto, but it buys time to put together a 2/3 majority against it.

The thing is, this is what we face on EVERY issue.

Just as there was no way to force Obama to submit the deal as a treaty (and we knew he wouldn’t because he has said so consistently since before the negotiations began), to do anything over his objection requires veto-proof majorities, which we certainly can’t get on anything else.

The only alternative is to shut down the government, which even Republican voters have never approved of, and independents oppose 2-1 steadily, even over Obamacare which they all hated.

This is another reason it is so important to control the White House, it’s not called the most powerful job in the world for nothing. Elections matter.

Yet, the whiners and complainers just blame our side for “not doing anything.” They have no actual plan themselves, of course, but making sense isn’t part of their ideology, apparently.

We can’t get veto-proof majorities on anything else, but we may get one on this. At least it’s worth trying. And Corker-Menendez may buy some of the time needed to pry away from 0bama those last few D votes.

“Sell” appears to be the right phrase here. Tens of billions of Iranian assets freed up by his actions, and it will take years to track the resulting flow of cash as a reward. That’s a lot of golf clubs.

A white or Republican president would have been impeached long ago and we wouldn’t be having this problem.

In Obama’s bizarro world students getting a 34% on tests should be rewarded. His previous passing grade of 40% affected 13% of our economy. This 34% passing grade affects the whole world and millions of lives. He doesn’t even have to get 34% correct. He just has to convince the teacher that 34% are not wrong. Or worse, 34% of the multiple choice questions only have one answer.

Obama only needs to convince 32 Senators. Michigan has two brain dead Senators that have never once voted against Obama. They would have to actually read and understand the issue to vote against it but they haven’t read or understood anything that didn’t involve their union puppet masters.

“Unlike flashbang grenades, nuclear weapons can and do hurt people…” Maybe he’s finally getting some sense.