“The truth is not rhetoric” 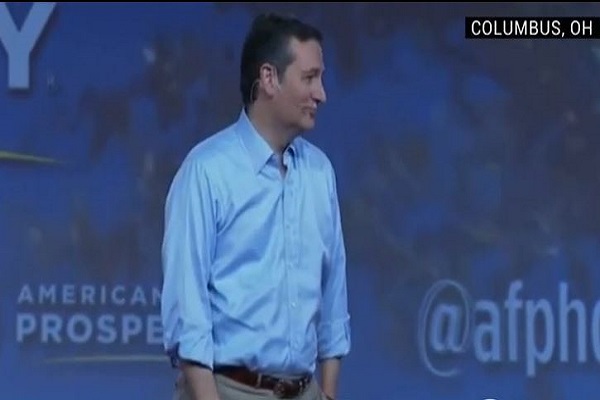 The Americans for Prosperity annual Defending the American Dream summit was held this weekend in Ohio, and hosted five of the 2016 Republican presidential candidates:  Ted Cruz, Jeb Bush, Marco Rubio, Rick Perry, and Bobby Jindal.  The clear favorite of those in attendance was Ted Cruz.

Texas Sen. Ted Cruz was the hands-down favorite of the Americans for Prosperity annual summit in Columbus, Ohio, this weekend, if the number and volume of ovations during the speeches of five presidential candidates who addressed the annual convention of tea party activists was the measure.

. . . .  Cruz, the tea party favorite since his 2010 election, sparked deafening cheers in the Columbus Convention Center auditorium even before he took the stage, entering to the 1980s power anthem “Eye of the Tiger.” During his speech Saturday, he went on to promise to “repeal every word of Obamacare,” and” rip to shreds this catastrophic Iranian nuclear deal.”

Each of Cruz’s lines was met with applause and cheers from the more than 3,000 activists.

The Twitter response speaks to the success of Cruz’s speech and of his message:

Cruz’s speech is contrasted with that of Jeb the day before:

Bush, who spoke a day earlier, worked hard but earned far fewer cheers, and mostly polite applause, from the anti-tax, economic conservative audience from around the country.

David White of Marietta, Ohio, was unimpressed with Bush.

“He did not articulate any plan for what he intends to do as president,” said White, of southeastern Ohio. “He used his time to try and rearrange perception of his record in Florida.”

Bush did stress his experience during eight years as Florida governor, noting tax cuts, reduction in the state government workforce and an overhaul in the state’s education system.

Jeb’s campaign strategy seems to be a reliance on his relatively conservative record as Florida governor, a record he established back when he “used to be a conservative.”

The other presidential hopefuls also outshone Jeb at the summit.  For example, Bobby Jindal is particularly articulate and passionate when discussing the need for assimilation as he speaks for a united, rather than a divided, country, a melting pot not a salad bowl.

While Jindal, Perry, and Rubio gave strong performances, it was Ted Cruz who “blew the house away.”

Excuse me, but Jeb lacks energy.

As to the “sense of entitlement” that both hillary and jeb own, it just produces very high negatives.

The grief probably belongs to the pundits, and the NY Times. While Drudge is having a field day keeping people informed. They’ve just got no one with any talent.

Trump, meanwhile, can take his pick of outlets; since he boosts ratings for shows like nobody’s business. And, when has politics ever been this entertaining before?

“Cruz outshines Jeb”. This is news? My potted fern outshines Jeb “Make America Mexico Again” Bush. But I bet Jeb’s penny loafers are shinier, and his crustless cucumber-and-lite-mayo sammiches are tastier than anything Cruz could come up with.

“are tastier than anything Cruz could come up with.”

Well now. Most Texians are imbibed with the lessons of cooking out at a early age.

Them itty bitty samiches would be fed to the livestock,
rabbits and hens whilst the guests would be pleasured with some homemade ribs, beans, and tater salad and possibly a adult beverage or two, for those not driving.

There are a number of good candidates that I enjoy listening to including Cruz, Jindal and Fiorina.

Let me pick a nit: taxes on a postcard is a great sound byte as well as an invitation to massive identity theft. How about taxes on an index card?

That doesn’t seem fair. If anything, there should have been two of Jeb! to make things more balanced.

Oh my goodness, rinardman! Thank you for pointing this out; I’ll change it immediately. Ugh. The candidates actually are: Ted Cruz, Jeb Bush, Marco Rubio, Rick Perry, and Bobby Jindal.

No worries.
I just figured one was the faux conservative for us livs and the other was the progressive spanish speaking one because everybody knows,

Heartiste recently wrote a post about what a man’s choice for his wife says about him:
“Women serve as an exceptionally accurate barometer for the measure of a man’s attractiveness and social standing. The hotter, sweeter, and more feminine a man’s girlfriend or wife, the likelier it is that man is charismatic, beloved, high status, and possessing those traits and achievements which other men admire and set women on fire.”

He then showed a dramatic contrast between Jeb Bush and Donald Trump in regard to who each man chose to marry and what their choices mean in terms of personality and leadership. Heartiste makes a VERY persuasive case in his post, particularly in his assessment of Bush as a low self-esteem beta male. You really must read this short but memorable post:
https://heartiste.wordpress.com/2015/07/17/the-measure-of-a-man-by-the-women-he-keeps/

So I decided to look for images of Ted Cruz’s wife Heidi to see if Heartiste’s rule can be extended to other candidates. I found that she is a very pretty blond woman (and the Cruz daughters are just darling). In my opinion, Heidi Cruz lies at the perfect point in between the Heartiste range that extends from the current Mrs. Donald Trump at one end and Mrs. Jeb Bush at the other. I feel like Goldilocks, who samples all the offerings available and comes to the same conclusion in each case: Heidi Cruz is “just right!”

So in light of Heartiste’s rule, I am not at all surprised that Cruz outshines Bush in every way.

So, how does Heartiste’s rule work for Bill Clinton?

Depends on the definition of “work”.

Or, the definition of wife.

Bill Clinton had plenty of beaurties, his mother said.

(But what he needed in a wife was a co-conspirator.)

Heartiste also seems to think that Cluimba was an illegal immigrant.

She was a Mexican resident of Mexico! He met her on a trip there.

I was there for the weekend. Cruz gave a fiery speech and there was lots of energy, but Rubio was much better overall. Well, in my opinion.