Citizens Must Defend Themselves as Cities Descend into Lawlessness

Citizens Must Defend Themselves as Cities Descend into Lawlessness

If only there was a constitutional amendment for that… 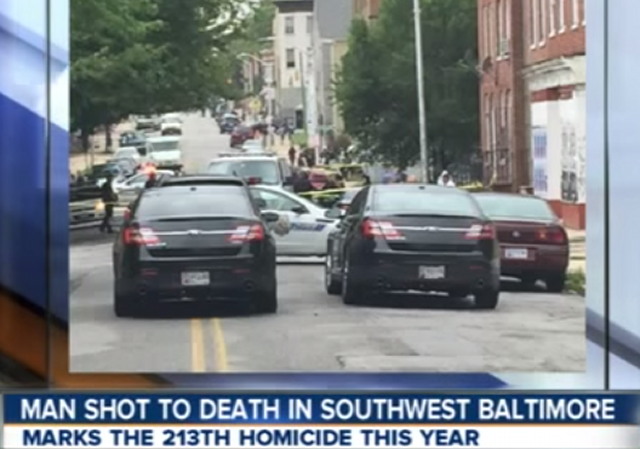 Following the riots of this spring, Baltimore has found itself a city on the edge. In fact, Baltimore has now surpassed New York City in homicides for the year.

Justin Fenton of the Baltimore Sun:

Baltimore has surpassed New York City for homicides this year.

Baltimore surpasses the number of murders for all of last year, with more than four months to go. The dubious distinction comes as the mayor faces growing public criticism. Mike Hellgren reports.

Another article by the same writer assigns blame to the riots for the situation:

“Ever since that riot, everything has gone downhill,” said Wesley Wilson, 48, as he looked on at the crime scene. He passes through the area every day to visit his neighborhood bar, he said, adding that it is typically a quiet area.

City crime has surged since the April riots that followed the death of 25-year-old Freddie Gray, who sustained a spinal injury while in police custody.

Here’s a short segment on a recent homicide from ABC 2 in Baltimore. You can see from the reportage that this has become routine:

People should be able to defend themselves in such situations. Detroit has faced similar crime problems, but recently, the city has been responding by arming citizens.

In a city plagued by chronic unemployment and crime and guarded by a dwindling police force, residents of Detroit are increasingly taking protection of themselves, their families and property into their own hands. Those who do so responsibly have the blessing and backing of Detroit Police Chief James Craig.

“When you look at the city of Detroit, we’re kind of leading the way in terms of urban areas with law-abiding citizens carrying guns,” Craig said recently.

The chief’s call to arms, which first came in December, 2013, has been answered by thousands of men and women tired of being victims and eager to reclaim their beleaguered city. In 2014, some new 1,169 handgun permits were issued, while 8,102 guns were registered with Detroit’s police department – many to prior permit holders who bought new firearms. So for in 2015, nearly 500 permits have issued by the department and more than 5,000 guns have been registered.

The initiative is working, too:

“Home invasions have gone down,” he said. “A huge reason was that there was a huge spate of homeowners using their guns against intruders. More people have guns and it’s making burglars cautious.”

The firearms instructor said women are driving growth in his business.

Well, I’m sure the Mayor and Mosby have NO idea why this is occuring

“Dumb Rabbits! Guns are for Criminals” – not even for cops………

You betcha.
I am getting my conceal carry license soon!

The police are handcuffed by the Obama DOJ and the lawlessness promulgated by him and directed by #AnimusMatters member Eric Holder of the neo-black KKK.

Mind-altering drugs are now legal and so self-protection from burglary and theft will increase exponentially-the intended consequences of liberty w/o self-government.

Congrats on your decision to carry. I hope you are in a gun-friendly state.

Have you bought you carry gun yet?

I’m sure the murder numbers are just a typographical error. With Rawlings-Blake as mayor and Mosby as city states attorney, it’s just not possible that Baltimore could be so out of control. Rawlings-Blake (new president of the U.S. Conference of Mayors, btw) and Mosby are at the top of their games. If it’s not just an error, then it must be the results of a vast vast vast right wing conspiracy.

Detroit Police Chief James Craig — A police chief who cares about the residents of his city. The progressives cannot let this stand.

Don’t worry be happy. I’m sure Warren Wilhelm, Jr. mayor of NYC, will get this murder numbers UP by this time next year. His brand of anarchy will return the city to the grandeur of it’s former socialist mayor, Dinkins. Dinkins, remember, is the mayor that called for more GUN CONTROL after a tourist was STABBED.

They are up – buut only slightly. The most important factr in predicting what the crime rate and everything is, is the rate in the period immediately before that. That reflectsd the nuber of criminals out on the streets, and in increrased by the making or encouraging of friends, and is reduced by deterrence and imprisonment.

The police carry firearms to protect their own lives first and foremost. Citizens need to do the same.

Wait, so Detroit is getting better because people are arming themselves? How can that be, I mean that would mean that more guns equal less crime and that just can’t be, the left tells me so!

So what you are saying is that thug criminal cowards are less likely to victimize people when there is an elevated chance that they might catch a bullet in the ass?!?! Well who’d have thunk it!

Given the demographics of Detroit, presumably large numbers of permits are being given to blacks — the progressives’ worst nightmare. Given that the law-abiding black community is the one that can best put carry permits to use, one might expect their issuance to have a pronounced beneficial effect. Hopefully, blacks defending themselves against black thugs won’t ever be Zimmermanned or Wilsoned.

I love the deer in the headlights look on peoples faces when they are told that the NRA began to help protect freed slaves from having their guns rights removed by Democrats during the Jim Crow days. Thats assuming they dont just have their fingers in their ears while chanting “lalalalalalalalalala”.

In Baltimore, the residents are helpless victims, members of abstract groups, and treated like statistics.They are disrespected by the “leaders.”

You choose your path based on whether you respect individuals or consider them abstract members of a group. Murder rates are statistics for the left but the murder of an individual is not a statistic to the individual or his/her family or friends. Good for Detroit.

When you have incompetent leaders, Usually a result of ” Affirmative Action,” sooner or later gets caught. All of the black Political leaders looked around to blame some old white guy, And there were none. It seems that the City’s money seems to have disappeared also. Who would have thunk ?