With an appearance by “Green Dog” Democrat Jerry Brown! 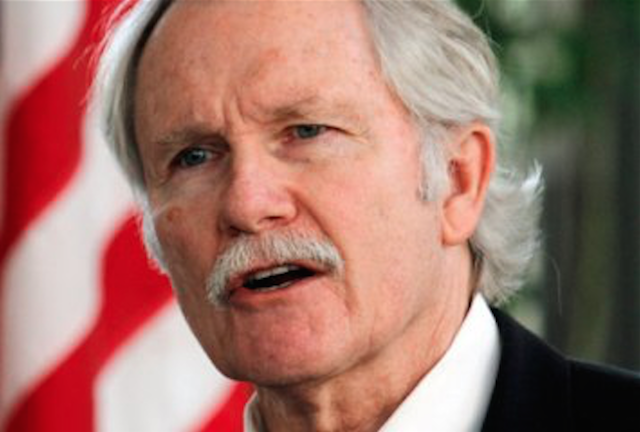 About a year ago, the biggest political headache Oregon Governor John Kitzhaber faced was explaining why there wasn’t a single enrollee in Covered Oregon ,after spending over $300 Million on the state health insurance exchange.

This year, however, Kitzhaber is Oregon’s former chief executive after resigning in response to reports indicating his finacee, Clivia Lynne Hayes, advised the governor and state employees on energy policy while getting paid by a group advocating on the issue.

In the wake of that resignation, officials have started digging into Kitzhaber’s other advisors…including the self-designated “Princess of Darkness”, who was tasked with fixing Covered Oregon.

…Kitzhaber handed oversight of the Cover Oregon mess to a secretive campaign consultant who liked to call herself the Princess of Darkness.

By her own admission, Patricia McCaig knew virtually nothing about health care reform or the reasons Cover Oregon had crashed. Her primary mission was not to save a beleaguered state program but to get Kitzhaber re-elected.

Emails that Kitzhaber’s office tried to delete from state computers show McCaig was effectively in charge of all decision making for Cover Oregon beginning in February 2014.

…By March 2014, emails show, McCaig was in full control of Cover Oregon. She routinely advocated keeping key details concealed from the public. For example, when the state was preparing responses to the U.S. Government Accountability Office, the investigative arm of Congress, McCaig argued against sharing information with Oregon Attorney General Ellen Rosenblum.

“Why is the AG reviewing?” McCaig wrote in a March 20 email to Kitzhaber and Bonetto. “Sending it to the AG could produce questions and allow speculation there is criminal behavior. It escalates the concern, gives the press another place to keep/promote a negative narrative, and expands external reviews.” (Disclosure: Rosenblum is married to WW publisher and co-owner Richard Meeker.)

Kitzhaber’s emails may be the Rosetta Stone of political corruption along the West Coast. Exchanges indicate that California Governor Jerry Brown’s administration is tied to the developing green scandal that led to the Oregon governor’s resignation in the first place. Katy Grimes of The Flash Report has this analysis:

Emails from 2013 and 2014 reveal Kitzhaber agreed to a deal with the governors of California and Washington, to implement low-carbon fuel standards and develop a scheme to foist green-energy agendas on multiple states.

Oregon’s “first lady” Cylvia Hayes played a key role in pushing the progressive climate policies of her fiance, Kitzhaber, in exchange for consulting contracts and funding from people involved in energy and environmental policy.

…In October 2013, California Gov. Jerry Brown, together with the Governors of Oregon and Washington and the British Columbia Premier, signed the Pacific Coast Action Plan on Climate and Energy, “to align climate change policies and promote clean energy.” The Pacific Coast Collaborative links with the West Coast Infrastructure Exchange (WCX), a compact between California, Oregon, Washington and British Columbia, formed in 2013 to promote “the type of new thinking necessary to solve the West Coast’s infrastructure crisis.” And the WCX is linked to the Clinton Foundation’s Clinton Global Initiative.

“California isn’t waiting for the rest of the world before it takes action on climate change,” said Gov. Brown. “Today, California, Oregon, Washington and British Columbia are all joining together to reduce greenhouse gases.”

I once noted that Brown was a “Green Dog Democrat”, as much for his promoting green policy as it was for how those rules made his bank account greener.

It will be interesting to see how investigators untangle the complex web of collaborative association on environmental and climate change policy between high level administrators and those who might profit from their rule-making. So far, the emails have uncovered some fascinating details on back-room interactions involving high-level Democrats.

“Shut Up, Rubes! Obamacare Is Working!”

According to the geniuses at VOX, ObamaDoggle is a smashing success.

Actually, it is smashing…the U.S. economy. And, by the measure of Cloward-Piven it is a success.

You have to close your eyes and click your heels together when you say that… over and over again.

In New York, Governor Cuomo has arranged that there won’t be any problem of anyone going about deleting or trying to delete e-mails from state computers.

In June 2013, he set anew policy that e-mail should be automatically deleted after 90 days. Corporations do this kind of thing. But these instructions were only followed sporadically, so last Friday (Feb 20) his chief information officer, Maggie Miller, sent out a memo ordering this to be done, and now, in all state offices, e-mail is being purged.

Corporations might purge email from mailboxes after some number of days, but this is to save storage space on local hard drives (where messages are typically replicated with common client-side mail programs) and on the servers where massive volumes of messages and attachments build up.

However, corporations are required by Sarbanes-Oxley and other regulations to ensure that they have all their email backed up and can recover it for investigations and other purposes.

So if some political hack is telling you that the government is deleting email trails “but it’s ok because corporations do it too” then you are being lied to.

One set of rules for me, and another for thee.

Article V Convention people, Article V. Time to cut the government back to about 20% of it’s current size.

“California isn’t waiting for the rest of the world before it takes action on climate change,”

It’s not important to make any difference; it’s important to be able to plead NOT GUILTY to causing hurricanes or floods or droughts or whatever anyone says was caused by carbon dioxide in the atmosphere.

“In other news of Kulhifornia’s leading role in the fight against imaginary threats, Gov. Moonbeam today signed new law into effect limiting the airspace that Ghost Riders In The Sky may use during peak traffic periods.”

What are you babbling about now?
Another invention of your fevered mind:

Or as LR would say:
“And with the length of his mind
He dark the sun…”

To cut down on carbon, the UK closed 4 out of 5 aluminum smelters. The jobs moved to Chinese plants. The UK plants used gas for power, the Chinese burn coal. Now the UK has to import that aluminum, with all the carbon needed for transport. Talk about a lose/lose/lose situation….
http://judithcurry.com/2015/02/23/mitigating-co2-emissions-a-busted-flush/

My official “Quote of Day.”

Gee, people in positions who have no skills for the job but will be paid anyway. Politics, employment for the idiots, morons, corrupt and sleazy. No wonder the country is in trouble

Another Oregon headline that popped up in my newsfeed yesterday:

A judge ruled that Oracle Corp. must extend its contract to provide IT services for Oregon’s Medicaid program for a year.

Oracle had signaled its intent to not renew its contract, which expires at the end of the month. Oregon sued the corporation, saying if Oracle walked away, thousands of Oregonians would be left in the lurch.

The state uses Oracle technology to enroll or re-enroll about 26,000 people a week in Medicaid.

Swimmingly! Oregon’s implementation of Obamacare and its linked Medicaid expansion is going swimmingly!

Any one else wish the framers had been a little bit broader about the 3rd Amendment? We’re seeing far too many instances of businesses and individuals being “ordered” to accommodate the government.

Apparently forced labor is ok if you’re a Democrat.

Dear Oregon: This is what happens when you let too many Californians into your state.

No kidding. The influx began about 1978. We went from a nice, moderate, low-cost-of-living state to a progressive’s regulated paradise. It gets more and more progressive by the week.