Are Bernie Sanders’ big crowds any match for the Clinton Machine?

Are Bernie Sanders’ big crowds any match for the Clinton Machine? 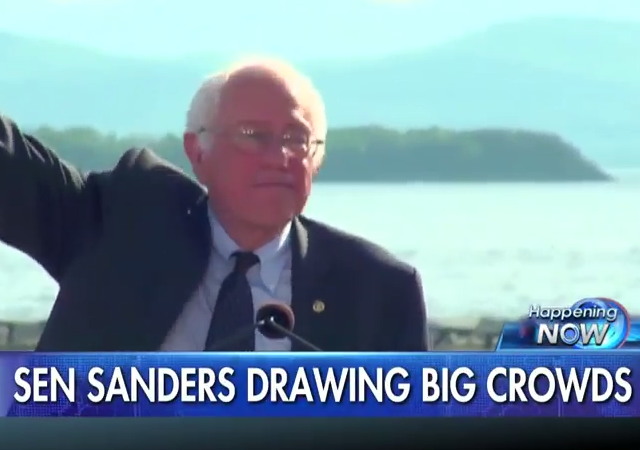 Plenty of people in political media are taking note of the large crowds Bernie Sanders is drawing at his events, but at the end of the day, it still might not be enough for Sanders to trounce Clinton.

Philip Bump of the Washington Post recently took a hard look at the numbers:

100,000 people have attended Bernie Sanders events this month. That doesn’t mean much.

Some 28,000 people attended Bernie Sanders’s rally in Portland, Ore., on Sunday — both in the venue and watching outside. The Fix’s Chris Cillizza marveled at the turnout. “28,000 people! In August! Of an off year!” Cillizza wrote. “I mean, that is a lot. A LOT.”

It’s an amount that exceeds one out of every 10 people who voted for Barack Obama in 2012 in Multnomah County, in fact. And then, the next day, Sanders pulled the same number in Los Angeles — meaning that in seven events since July 1, Sanders spoke before 100,000 people.

So what does this mean? I hate to say it — and I hate to rain on Sanders’ well-attended parade — but: It doesn’t mean a whole lot.

For example. That Los Angeles crowd was only about 1 percent of the people that voted for Obama in 2012 in that county. Because it’s a big county and it’s a small venue that can only hold so many! Which is the point: It’s impossible to know what a crowd size means. Is turning out 2.2 percent of Obama’s 2012 vote in Seattle good?

Dan Springer of FOX News reports that Sanders is campaigning in Iowa this weekend and that he may be too far left for Iowa voters. Also, despite Hillary Clinton’s enthusiasm gap, she still has the fundraising advantage:

Another thing that continues to present a problem for Sanders is that although he’s running for the Democratic nomination, he’s technically not a Democrat. Even Martin O’Malley is hitting him for that.

O’Malley swipes at Sanders in Iowa

The former Maryland governor — Sanders’ foremost progressive challenger for the Democratic presidential nomination — made the observation Thursday at the Iowa State Fair.

“I don’t think it’s a problem for the Democratic Party, but it might be a problem long-term for Sen. Sanders,” O’Malley said when asked whether Sanders’s self-declared socialism would be a problem.

“What difference does it make at this point…..” “..although he’s running for the Democratic nomination, he’s technically not a Democrat….”

The Dems have run lots of things that were NOT………

And if one puts labels aside, he’s definitely more of a Democrat that Hillary.

Mr Sanders? What’s the difference between a Socialist and a Democrat?

Bernie Sander’s is a democratic socialist, not a socialist. Sanders describes democratic socialism this way: “I think [democratic socialism] means the government has got to play a very important role in making sure that as a right of citizenship all of our people have healthcare; that as a right, all of our kids, regardless of income, have quality childcare, are able to go to college without going deeply into debt; that it means we do not allow large corporations and moneyed interests to destroy our environment; that we create a government in which it is not dominated by big money interest. I mean, to me, it means democracy, frankly. That’s all it means.” For more info about what Sanders really stands for, go to http://www.feelthebern.org.

Well, I gotta say he’s more of a nationalist than most socialists are. He has a less open hatred of the US than most.

And, as others have observed, that makes him a national socialist. Hitler was all about nationalized medicine, too, as I recall. He brought those corporations to heel, too, by golly.

European “democratic socialism” would have been bankrupt decades ago if the USA’s massive capitalist economic engine hadn’t provided both the defense for the continent over the last 70 years, and all the medical and drug research and developing and innovation and patenting for the last 40.

Socialism’s programs and promises haven’t changed in 100 years, and have failed to deliver in any of the many places they have been tried over that time. The socialists’ usually excuse is that democracy gets in the way. They are just totalitarians who can’t grab enough power yet.

Bernie Sander’s is a democratic socialist, not a socialist.

A “democratic socialist” is a socialist. “Socialism” subsumes a wide range of variants.

Exactly what subspecies of socialist Bernie might be would be an interesting topic for those actually up on modern socialisms. There are many sorts of socialist which he isn’t. He’s apparently not a Bolshevik, a fascist, an anarcho-syndicalist, etc. (While I’m certainly no serious student of Sandersism, I suspect that he’s rather close to the Mensheviks.) But except as an intellectual exercise, this degree of precision hardly matters. He’s a socialist, and that’s all there is to it.

Given equal money Bernie could beat Hillary, but Hillary has a billion or two from those that surely know the Clintons return the favor 100 fold, whether it is in state secrets, uranium production, arms, or regulatory favors.

When it comes to billions in graft, I don’t think Bernie can compete.

On crowds, part of the Obama crowd came for the free concerts performed ahead of Obama, iirc. The Bern is a phenomenon all on his own, but when Hillary is handcuffed, Warren will step up.

Bump is another hack from WaPo.

Is Bernie too leftist for Iowa? Well, he would not do well in the GOP side, but Iowa Democrats kept sending Tom Harkin to Congress for some 40 years, and you can’t find much space between his voting record and Bernie’s.

The fact is, Iowa is usually razor close in national elections, and often statewide, but it isn’t because they’re a bunch of moderates on either side.

Crowd size doesn’t always mean anything, and doesn’t always mean the same thing. It’s a straw man for Bump to attack. But consistently drawing larger and more enthusiastic crowds than the undisputed heavy favorite who’s been a national Democratic figure for 24 years means something.

And whatever it means, it isn’t good for Hillary.