“By their courage, they saved lives.” 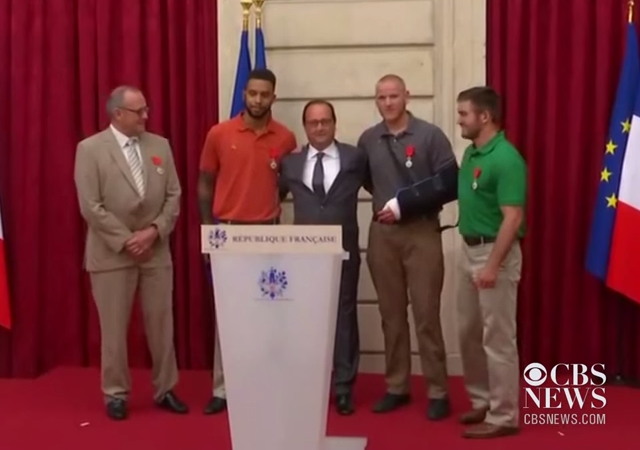 The three Americans who stopped a terror attack on a train in France over the weekend were given the Legion of Honor award by French President François Hollande.

Three days after they pounced on and subdued a gunman Friday aboard a packed train headed to Paris, American childhood friends Anthony Sadler, Spencer Stone and Alek Skarlatos received the Legion of Honor — France’s highest recognition.

The Americans, who reportedly met in middle school in California, planned on spending the summer sightseeing together. It was Sadler’s first trip to Europe, and National Guardsman Skarlatos was on a monthlong break after serving in Afghanistan. Stone is an Air Force serviceman.

They will return to the United States celebrated for their courage and quick action, and for exemplifying teamwork and friendship…

“By their courage, they saved lives,” President François Hollande said. “They gave us an example of what is possible to do in these kinds of situations.”

On a related note, our friend Glenn Reynolds of Instapundit has a new column in USA Today:

To Americans who remember Sept. 11, 2001, this kind of response — even down to the “let’s go” — echoes the story of Todd Beamer and the passengers of Flight 93. It’s the right response, of course, to terrorists who threaten innocents.

As Brad Todd wrote days after 9/11, it was the response of ordinary Americans on this flight that meant a repeat of the attacks was much less likely: “Just 109 minutes after a new form of terrorism — the most deadly yet invented — came into use, it was rendered, if not obsolete, at least decidedly less effective. … United Flight 93 did not hit a building. It did not kill anyone on the ground. … Why? Because it had informed Americans on board who’d had 109 minutes to come up with a counteraction. And the next time a hijacker full of hate pulls the same stunt with a single knife, he’ll get the same treatment and meet the same result as those on United Flight 93. Dead, yes. Murderous, yes. But successful? No.”

Meanwhile, the expensive global security establishment failed to stop 9/11, and — despite having the French-train gunman flagged as a possible jihadist— did nothing to stop this weekend’s attack. And that’s a lesson.

As Glenn would say, read the whole thing.

The story of another American hero on that train who took two bullets, and was saved by the military guys.

Good catch. His name is absent in nearly all of the reporting.

Significant to me is the fact that this “lone wolf” was on radar just like the lone wolves who have acted in the U.S. Clearly the west is not as effective as it needs to be in thwarting the spread of this virus. But I’m not counting on this administration to change course.

The lesson is: Don’t confuse deterrence with security.

Say what you want about France, but they’ve already awarded our guys for their courage. In fact I think the mayor of the nearby town gave them medals while they still had blood on their shirts.

Meanwhile, how long did it take for the Obama administration to award Purple Hearts to our wounded and dead soldiers from Fort Hood?

Yes, the city of Arras was very quick to bestow awards. And according to the story that Ragspierre links, there seems to have been another person in addition to the “French-American” professor, Mark Moogalian, who made an effort to stop the attack. It may have been military fitness and habits of mind, rather than nationality, that really made the difference here.

I don’t see the point of sniping (however subtly) at the French in connection with this story. I’ve encountered a goodly number of cordial people in France.

I didn’t snipe at the French. The French held back the Germans in WWI until the British, and eventually the Americans, could get there. They paid a heartbreaking price, in blood and bodies and courage.

Don’t read in your own bias.

This is the first I saw that one of the Americans is black. It’s a little thing, but still satisfying.

We all know what Obama is – a chickenshit of the first order. That aside, I really liked CNN’s report this AM – the take away lesson from the successful encounter of these three guys and the f’g muzzy – be prepared to run away, or have these three next to you. Truly: we have become a nation of cowards. 🙁 🙁

Back in the eighties I was riding in the front seat of a Greyhound bus headed from Barstow to LA. We were out in the middle of the trackless desert when this old black man dressed as a beatnik came bopping up the isle and told the driver he wanted to get off. The driver explained that company rules forbade him from letting passengers off between stops, but the beatnik persisted. Eventually the dude grabbed the steering wheel and that’s when I sprung out of my seat and grabbed him. I’m a big guy, and I used my best “cop voice” to tell him “Go back and sit down!”. He did.

The driver never even thanked me. I guess back in those days, my behavior was pretty much expected of citizens. These days I would be arrested for a hate crime, no doubt…

You are right about it being American exceptionalism. If our guys had not been on the train, the Europeans would have done nothing and been killed. They have become so passive that sometimes it is up to us to save these people from themselves.

France and all countries need a 2nd Amendment.

Not to throw cold water on everyone’s delight, but — and I’m taking the honorable Skarlatos at his word regarding what he told his brother — there was only ONE “hero” on that train.

There was one person who ran the length of a train car, okay with dying so that others could live. While commendable for sure, helping to tie up a disarmed thug, handing out blankets after the fact, or even acting in
immediate self defense doesn’t come close.

Is this a function of giving everyone in everything participation awards? Or possibly the result of media crap such as calling Bruce Jenner a hero.