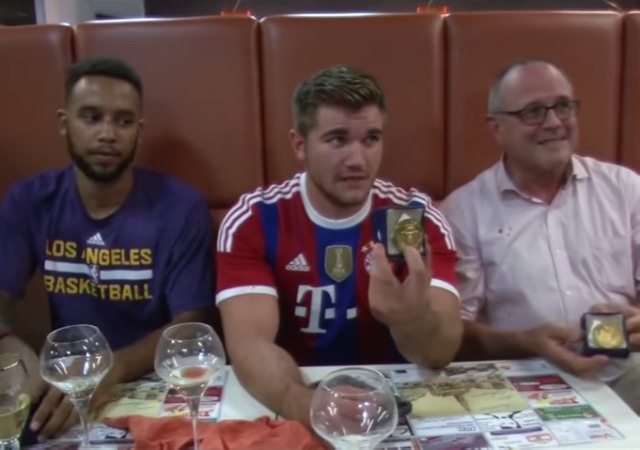 A member of the Air Force, a national guardsman and a college student, (all Americans) stopped a terror attack on a French train Friday night.

This report from France 24 has the basic timeline of the incident:

“We heard a gunshot and we heard glass breaking behind us, and saw a train employee sprint past us down the aisle,” Sadler said from France, describing the incident.

They then saw the gunman entering their train car.

“I didn’t realise what was happening until I saw a guard run past. I looked back and saw a guy enter with a Kalashnikov. My friends and I got down and then I said, ‘Let’s get him’,” said Skarlatos, 22, who returned from service in Afghanistan in July.

“As he was cocking it to shoot it, Alek just yells, ‘Spencer, go!’ and Spencer runs down the aisle,” Sadler said. “Spencer makes first contact, he tackles the guy, Alek wrestles the gun away from him, and the gunman pulls out a box cutter and slices Spencer a few times.”

Sadler said the three men were quickly able to subdue the suspect.

A fourth man, a British national, helped the three men subdue the gunman once he was down.

France’s interior minister has praised the “great bravery” of the American passengers who helped overpower a man after the latter opened fire aboard a French train Friday. One of the men involved in subduing the gunman said there would have been “real carnage” had they not intervened.

France has been on high alert since the attacks on the offices of the satirical magazine Charlie Hebdo.

Here’s a picture of the American serviceman who received the most injuries in the attack:

Here is video posted allegedly of the perp after being subdued:

This is the college student and the other serviceman:

Damn right they are!

Yes, they are; but, not quite up to Caitlyn’s level of herodom.

At least the French are grateful and are showing it. I don’t think much of the railway employee running away like hell. I hope somebody makes him answer a lot of questions. What probably made it a little easier, I read elsewhere, that the bullet in the chamber had misfired. It had a deeply dented primer, but didn’t go off. Maybe cheap Chinese AK ammo. In any event the perp apparently didn’t know to clear the chamber and let a new round load. Dumb muzzies. His gun experience is probably limited to shooting into the air at weddings.

I don’t blame the railway man for running. As Bill Whittle explained a few years ago, there are many sheep and few sheepdogs.

The three American guys? Sheepdogs. The British fellow who helped out at the end? Sheepdog.

It’s not easy to be a sheepdog. You have to overcome a lot of basic, human instincts. I’m not sure of what my own reaction would be in that situation.

So let’s not get down on people for being sheep. That’s what most people are. Let’s celebrate the sheepdogs — and put down the wolves.

I don’t blame the Frenchman for retreating, nor do I necessarily consider him less brave than the others. He apparently fought the gunman before being forced to flee. Remember, each person had a different experience, different circumstances, and those circumstances were changing constantly in split seconds. Running away may have been his best, even bravest, option, there’s no way for us to know for sure right now. That said, I do applaud the Americans and the British man who subdued the gunman.

The Americans had three people on their team. They worked together. One man running away may have been his best option.

Instinct not multiculturalism saved the day!

Instinct with some experience and training. National Guard and what, Airforce? In Afghanistan?

It must be difficult for these guys to sit on a train without man-spreading, given the obvious fact that they have giant balls.

Anybody else notice something about these three guys, who have reportedly been the best of friends since childhood? One of them is black. Doesn’t really fit the narrative the prog drones are pushing, does it?

Excellent work! Congratulations and much gratitude to these fine men for their courage and selflessness.

Compared to other people around the world,

Absolutely. All one needs to do is travel the world to see. It is clear.

Waiting for Obama’s statement. Hello??? Anyone there???

Thank goodness that they were able to subdue this guy before he could kill anyone! Like JP said “Heroes”.

Lafayette, we are here!

No #TerroristLivesMatter protests? Did they really have to beat the poor man into submission?

Once again saving the french asses. Proof that people still believe in something bigger than themselves. Well done! Well done boys!

Three Americans see someone walk into their train car with a rifle and immediately tackle him and restrain him.
The “Open Carry” folks who like to enter fast-food restaurants with an AR-15 slung over their shoulder should take note.