Contrary to her claim at the infamous UN press conference. 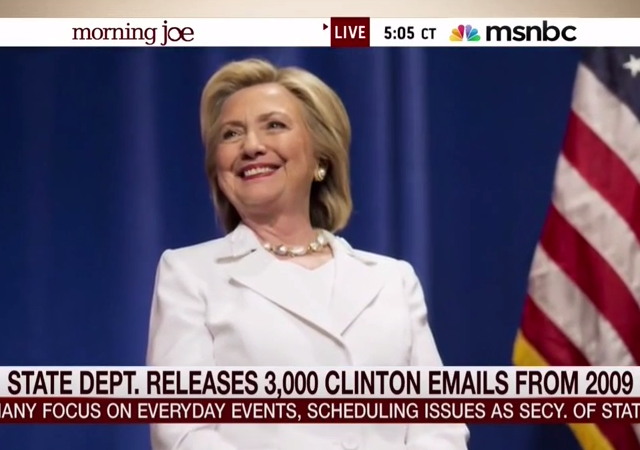 Remember all the fanfare over Hillary Clinton releasing her emails and claiming that there wasn’t any classified information in any of them?

QUESTION: Were you ever — were you ever specifically briefed on the security implications of using — using your own email server and using your personal address to email with the president?

So I’m certainly well-aware of the classification requirements and did not send classified material.

At the time, Professor Jacobson expressed skepticism about Hillary’s claims:

As Secretary of State, Hillary presumably received classified and other protected information via email at least on occasion, since it was her only email account. That distinguishes her from predecessors, who at least had government email accounts.

We need more facts on her usage, but if Hillary maintained classified documents (including emails) on an unclassified computer device and email account, that could raise much more serious issues than the records violation.

The State Department has now redacted two dozen of her emails. Because some of the material was classified.

NYT Reporter: State Dept. Redacted Two-Dozen Clinton Emails Despite Her Saying There Was No Classified Information On Them

New York Times reporter Michael Schmidt revealed Wednesday that the State Department had gone back and classified two-dozen of Hillary Clinton’s emails from when she was Secretary of State.

This again refutes Clinton’s claim that she never emailed anything sensitive enough to be classified on her private server.

“What happened last night was kind of interesting,” Schmidt said on MSNBC’s Morning Joe. “The State Department went back and said they’d classified about two-dozen of her emails, portions of them, saying that information in them was now classified. They said it wasn’t classified at the time but it had to be redacted in the emails. Now if you’ll recall, she has said there was no classified information on the emails, but people in the State Department have said to me that they thought it was hard to believe that of all these 55,000 emails that she didn’t have anything sensitive, and apparently it’s sensitive enough now to not be disclosed.”

Another trove of emails was released late Tuesday evening by State, revealing, among other things, an expansive role by liberal family friend Sidney Blumenthal.

A State Department spokesman said Wednesday that details from 25 emails were deemed classified and withheld from the 3,000-page trove of Hillary Clinton documents released overnight — despite the former secretary of state claiming she never sent classified material on her personal email.

State Department spokesman John Kirby acknowledged at a briefing that details from the 25 emails are now considered “classified.” The messages were released, with those portions redacted.

However, Clinton declared in March that she “did not email any classified material to anyone” on her account.

Let me guess, it depends on what the meaning of classified is?

IF we had an AG…who was not a key member of the criminal gang…Hellary would be met at her next landing by FBI agents taking her into custody.

There’s ALL kinds of good evidence here to charge with various federal offenses.

The Democrat Party has become a criminal enterprise.

Oh, I would not restrict that statement too much…

Democrat AGs serve one purpose only: To act as scandal goalies diligently protecting the criminal activities of their lieges by refusing to investigate or prosecute any criminal activity by Democrats no matter how blatant* and by waging lawfare on non-Democrats to financially and reputationally ruin dissidents.

* The exception being when Dems get out of line as NJ Sen. Robert Menendez did in criticizing Emperor Obama and thus catching a Federal case for “corruption” which is normally a resume enhancer for Dems.

Did we ever find out who is the lead FBI investigator in the IRS scandal.
The last time somebody asked the FBI Director, eh didn’t remember.
Dollars to donuts, there never was an investigation.

Hillary’s personal (I won’t use the word “private” as it connotes “secure,” which it was not) e-mail server exposed all of her correspondence as SoS to any foreign government with the expertise to hack into it (probably not too difficult). Yet an SoS-White House e-mail released to Congress is nearly completely redacted. So correspondence that was dangerously exposed to the prying eyes of foreign governments, our Congress is denied by the administration. Makes perfect sense.

Looks like lots of people owe Safire an apology (although they’ll have to make a trip to the cemetery to deliver those apologies to him).

I used to have a rule of thumb when it came to statements by Democrat politicians. It was don’t accept it at face value, but only after it has been verified. Sort of like Reagan’s ‘trust but verify’ without the ‘trust’.

I have long since replaced that rule with a simpler and more accurate and useful one: assume they are lying. On anything that matters – and I mean anything – that rule has proven to apply. When is the last time Hillary or Obama said anything that was true? About the weather perhaps? But even there, I don’t think I’d trust them.

Sad, but true. Even sadder? Their supporters don’t care.

Well, I think it is true that former president Bill Clinton is her husband.

But the subtext is a lie.

“Information in them is NOW classified.”

And there is your loophole. That’s what Hillary, the White House, and the State Department will all hang their hat on. That’s what they will push to the media.

We’ll see Hillary (and the media, by extension) really soon saying, “it wasn’t classified at the time, so I didn’t do anything wrong.”

Mail marked classified (and on the separate “classified” e-mail system) was sent to her close aides, who did have state.gov addresses and used the classified systemn, and printed out for her.

Mail she sent was, by definition, not classified, because to be classified, somebody has to mark it classified. Information is not born CLASSIFIED unless so marked.

So she was incapable of performing her duties without a subordinate as an intermediary to all of her confidential communications? I wonder how often that was one of her subordinates with known conflicts of interest?

As SoS she should have known that anything she discussed or put into print could be classified later. She still displayed an astonishing level of disregard for proper behavior with what anyone with common sense would have considered “sensitive” or “privileged” (if not actually “classified”) information, as any office worker understands. Her cavalier attitude towards national security (this is what we’re discussing, not merely “Hillary’s e-mails”) should disqualify her from any office of trust. (But hey, we don’t trust the president anymore, so if Hillary becomes president we can just continue to not trust her.)

It was never remotely possible for the SoS to conduct business without delving into classified information at every turn. Except for the email request for tea of course.

Unless “tea” as a code word for arms shipments going through Benghazi. “I want more tea” means “Send more arms.”

Until someone comes up with a video of her beating a puppy or murdering someone, the press will continue to (gladly) “carry her water.”

Why continue showing pictures of the scummy old crow that date back 10 years?

What must be remembered here is that the Clintons rarely lie, per se, but rather just parse the truth. Yes, some of the content of her emails is now classified. But it very likely wasn’t at the time that it was initially stored on her email server. Instead, it was “sensitive” or something similar, which is almost as protected, and probably illegal to store outside State Dept computers. But it wasn’t “classified” at that time. Classification apparently requires someone to look at a document and declare it to be such. That hadn’t happened yet, which is why she probably isn’t strictly lying, but rather doing something similar to her husband claiming that BJs aren’t sex.