This is not a drill: Al Sharpton is launching a media watch blog, and you’re all invited to the party!

According to Capital New York Sharpton’s advocacy organization, the National Action Network, will launch “The Daily Shift,” a new media criticism blog that organizers hope will give bloggers and citizen journalists a chance in the spotlight.

The site was announced via the Instagram account of Rachel Noerdlinger, a Sharpton spokeswoman who briefly worked in the offices of New York Mayor Bill di Blasio: 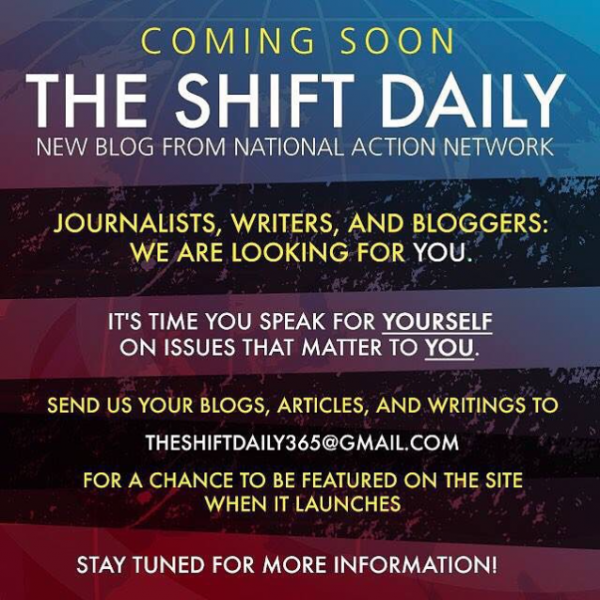 For a limited time only, you, dear reader, can contribute your work to Al Sharpton for free!

I wouldn’t be surprised if he needs a little padding to help get started; after all, Sharpton hasn’t exactly defined himself by his successes. Remember this gem, from 2011?

Resist we much! We must, and we will much…about…that…be committed. From man to meme, in the time span of just a few seconds.

Here’s a thought: if Sharpton is launching a media watch blog, will he be ethically compelled to report on himself?

…if there’s anything to report on, that is. Rumors of a pending shakeup at MSNBC have left media watchdogs wondering whether or not the network is ready to put Sharpton out to pasture in favor of bringing primetime firebrand (prepare yourselves) Keith Olbermann back into the fold.

Sources told Mediaite that the hottest rumor revolves Olbermann being involved in talks to return to MSNBC, where he hosted “Countdown with Keith Olbermann” from 2003 to 2011. Olbermann, who is doing sports at ESPN2, is leaving at the end of the month.

“Even a theoretical Olbermann return could suggest MSNBC’s desire to get back into the fiery prime time wars, and also highlights the reality that several other shows are likely on the chopping block,” Mediaite said.
In addition, the media watchdog said it was told by multiple sources that several MSNBC shows shows are “at risk.”

They include “All In with Chris Hayes,” “PoliticsNation” with the Rev. Al Sharpton and “The Ed Show” hosted by Ed Schultz.

“According to the sources, top officials are eyeing the cancellation of Hayes’ nightly program after 27 months of lackluster ratings,” Mediaite said.

“The show was meant to replicate the success of similarly wonky, younger-demo-appealing Rachel Maddow, but continually failed to achieve ratings, especially while competing with [Fox News’] Bill O’Reilly.”

Sharpton, Mediaite reports, has become “something of a liability for the network seeking to shift away from its deeply left-wing image.

If MSNBC wants to shift away from its “deeply left-wing image,” its executives are going to have to do more than fire the befoibled Reverend and a few token hipsters.

“NUTS!” is the only appropriate response to this.

“Gen. Anthony Clement McAuliffe is best remembered for uttering a single word — no mean feat, considering that even the shortest Bible verse has two. Commanding the U.S. Army’s beleaguered and surrounded 101st Airborne Division during World War II’s Battle of the Bulge, McAuliffe received a German surrender ultimatum. “Nuts!” he replied, and became a lasting symbol of American courage and determination under fire.”

It is said it took the Germans an hour to find a English speaker who could explain the message to them.

Exactly why we should treat all the traitors and Leftists that way.

It must be pretty hard to get someone to do the Clinton’s bidding, if they had to get Al Sharpton to be the front man for this.

He doesn’t have all that much credibility, although I suppose he won’t be too readily be connected to the Clintons. But he is.

Oh my gosh, thank you! I’m so glad I’m not the only one whose mind immediately went there!!

My mind not only went there, it fell out on the floor and laughed for a good five minutes.

I do hate when they make it too easy, tho.

I thought there was a typo with an extra, unnecessary “f” in the title.

Would that be the Daily Sh*t Fit?

Maybe I should write a blog for them, submit it for consideration.

I know they will not publish it anyway, but it will be fun just to imagine their faces.

Oooh, I think you are on to something. They get all surprised when they find out that Conservatives have a sense of humor.

Andrew Lack is gonna blow it. He’s bringing back Olberman and Lyin Brian? And Sharpton is still there? What a dope.

I’m an over weight, old, white guy who has been been bombarded by the “Black Grievance Industry” since I graduated from high school in 1964. After 50 years of this excrement I have developed a strong aversion to being called a racist only because I’m white. Until the militants in the BGI start taking aim at their own internal race problems of high school dropouts, single parent families, aborted black babies, or large families supported by welfare babies, and vile rap and thug music, I intend to totally ignore people like Sharpton. Look at how many previous immigrant races have come to this country and achieved high levels of success in our country and our economy. Certainly there are great success stories of Black people but compared to Chinese, Indians, Pakistanis,immigrants from Vietnam, the Southeast Asian islands and many from the Middle East and South America, the overwhelming numbers indicate to me that the Black race prefers to live on the dole rather than the hard work required to live the good life in America. Sure many may call me a racist. But after a half century of adult experience with an open mind, and seeing little from people like the extortion minded Sharpton, who refuses to demand more from his folks, I can’t and shouldn’t be held to an unattainable standard.

You haven’t been around black high achievers like I have, then. They are ALL supporting somebody else, typically a family member or two — parents, a sibling, a niece, a nephew. Black high achievers are the ultimate sandwich generation.

It was no surprise to me when the black middle class tipped over under economic stress. I may have taken a haircut when the stock market crashed, but I didn’t have to take in additional family, as well.

His problem stems from the fact that he speaks English as a second language. His native language is Ebonics.

His native language is Thug.

You know why there were only 56 contestants in the “Miss Ebonics” contest?

Nobody wanted to be “Miss Idaho”

Hey fellow white Americans, the answer is at hand for all of us. If we just admit right up front that we are racists then there is no argument. Let it be known that yes we are racists and go from there. That takes a lot of the venom out of the left’s argument and then they start talking about other things. If we are asked about our racism we just say that we believe that blacks make up a disproportionate share of violent crime and that only a fool would ignore such data. The same applies to our schools, mortgages, children out of wedlock and riot prone tendencies. We can the move on to illegal immigrants and make the same arguments except for the riots. It is then up to the PC liberals to refute our data and prove us wrong. Good luck to them.

You first. I like my job and, as you said, am actually motivated to pay off my mortgage.

I keep looking at the train wreck that is Al Sharpton and keep wondering if this guy has a severe case of AIDs. The reason I say this is that every new photo that is published of him, he gets more and more emaciated.

I am led to understand that some people exhibit Rebrun Al’s symptoms from stomach stapling, which the dear Rebrun has had. If it is indeed AIDS, you are seeing what is called wasting.

Oh boy, now I can submit some rap-ified verse to The Short Shrift Daily.

I’ll get my AlSharpie out and start doing my white privilege thing under the pen name of Race Dolezal.

Remember the Al Sharpton and the National Action Network meeting in Chicago?

Yet, after all this, they again voted in the Chicago Machine!!!

Whatever little success MSNBC ever had came when America had a Republican president and Ogremann was making several million dollars a year stoking hatred against Bush to divide the country.

If it is true they are seriously considering bringing Ogremann back I wonder if that means they think a Republican may win in ’16? At any rate, a Republican president would be the best thing that could happen for MSNBC. They all should secretly be working to elect one.

All Racism All The Time!

This could be fun if they allow comments.

I fully support Reverend Al Sharpton’s 1st Amendment rights to free speech and I hope his newest endeavor does just as much as his MSNBC gig has done to further conservative goals by showing whom our opponents consider to be a major leader in the pursuit of their shared political goals.

If your opponent moves to act like an ass, stand aside, let him speak, and silently thank him when he is finished making an ass of himself. If his followers are capable, they will see the assness and abandon him – and hopefully question his ideology and positions as well. If they are not capable, they are not reachable anyway.

Bear in mind there are many articulate, well-spoken other choices for Al’s MSNBC gig, people who would be far better at promoting their bankrupt policies and agendae. The more media gigs that stay occupied by the likes of Rev. Al, the better off we are, because it means their real talent remains on the bench.

Panne if the blog is hilarious and inaccurate: THE SHIFT DAILY. Just remove the F.

Bloody iPad autocorrect feature! I wrote: The name of the blog….