Live coverage of the announcement, and America’s reaction 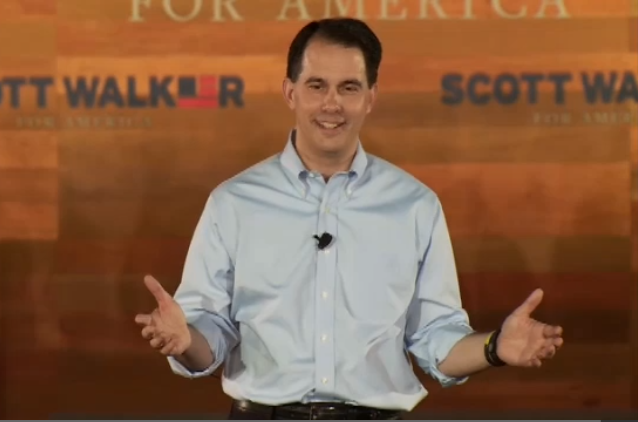 Last week, Wisconsin Governor Scott Walker used Instagram and Twitter to tease his plans for a run at the presidency. He has a slick digital game, but did that polish translate as Candidate Walker steps into the spotlight?

Monday at 5:00 p.m. CST, Scott Walker took the stage in Waukesha, Wisconsin and formally announced his campaign for president. If you missed the announcement live, you can watch it here:

This morning the campaign released an official announcement video, complete with references to Walker’s union-busting days as governor, and a lengthy personal message from the man himself:

Walker has been teasing the announcement all day on Twitter, sending out personal messages to explain why he’s running, and to encourage his followers to support the campaign:

I'm in. I'm running for president because Americans deserve a leader who will fight and win for them. – SW http://t.co/DZG253QjfP #Walker16

I'm running for President of the United States to fight and win for the American people. -SW #Walker16 http://t.co/bBnRMAurmh

The #Walker16 campaign begins today. RT if you're ready for Walker. Signup @ http://t.co/G0gxSosNCJ to join the team pic.twitter.com/wSsf3iiUFZ

If you can’t be in Wisconsin today and you’re interested in rallying for Walker, never fear—his campaign has provided a handy guide to his announcement tour:

Interested in seeing Scott Walker this week? Here are the stops. Grab a ticket at http://t.co/33Xg4jGMY4 #Walker16 pic.twitter.com/fCilB7WGQP

I’m about half a glass of wine away from ordering that as a print on canvas.

The video linked above has been removed. Here’s a link that works.

Walker and Rubio, a few of the rare adults who speak to the issues and got where they are today by actually working and not having a billion dollar company handed to them.
They both speak in sentences not yelling sound bites.

It would be hard to ask for stronger endorsements than the enmity he has earned from Trumka, Hillary, and Obama.

From what I caught of it, Walker’s rollout speech was pretty good. But, I didn’t catch his position on illiegal immigration, which is a litmus test for me. Anyone claiming to work for the American people while bending over backwards for criminals who have invaded our country and stolen our job is no better than non-natural-born vermin who attempt to steal the presidency.