Victory for eyebrow threaders in Texas

Victory for eyebrow threaders in Texas

Entrepreneurs win against the Texas Department of Licensing and Regulation

The release from the Institute for Justice continued:

Today, Texas entrepreneurs celebrated as a landmark Texas Supreme Court decision became final following the passing of the deadline for the government to seek further review. This means countless entrepreneurs, like Ash Patel, can go back to work after having to shut down their businesses for nearly six years. The sweeping decision will have huge implications not just for all Texans, but for entrepreneurs across the U.S., and means Texas occupational licensing laws now face real scrutiny.

In late June, the Texas Supreme Court ruled 6-3 that the Texas Department of Licensing and Regulation (TDLR) violated the state constitution when it ordered eyebrow threaders—who practice a traditional South Asian method of using only cotton thread to remove eyebrow hair— to stop working unless they obtained 750 hours of conventional cosmetology training and passed two licensing exams. Not a minute of the training or a single question on the exams was devoted to eyebrow threading.

“This ruling should serve as a notice to the Texas Legislature and to legislatures in other states: Reform your occupational licensing laws or be prepared to explain your reasoning to the courts,” said lead attorney Wesley Hottot of the Institute for Justice. “State officials can’t simply meddle with people’s ability to go to work and support their families.”

The Court held that “the Threaders have met their high burden of proving that, as applied to them, the requirement of 750 hours of training to become licensed is not just unreasonable or harsh, but it is so oppressive that it violates Article I, § 19 of the Texas Constitution.” In so doing, the Texas Supreme Court also articulated a new test for judging the constitutionality of economic regulations in Texas. After Patel v. TDLR, Texas courts must now judge “whether the statute’s effect as a whole is so unreasonably burdensome that it becomes oppressive in relation to the underlying governmental interest.”

One of the justices ruling against TDLR, Justice Don Willett, wrote the following: “This case raises constitutional eyebrows because it asks building-block questions about constitutional architecture—about how we as Texans govern ourselves and about the relationship of the citizen to the State. This case concerns far more than whether Ashish Patel can pluck unwanted hair with a strand of thread. This case is fundamentally about the American Dream and the unalienable human right to pursue happiness without curtsying to government on bended knee. It is about whether government can connive with rent-seeking factions to ration liberty unrestrained, and whether judges must submissively uphold even the most risible encroachments.”

And entrepreneurs affected by the TDLR’s regulations were “overjoyed.”

“I am overjoyed that the Court recognized that I should be free to do my job and run my business without having to learn unnecessary cosmetology skills,” said Ash Patel. “I came to Texas from India because I knew it would provide me the opportunity to start my own business. I cannot wait to reopen my store and once again serve my customers.”

Meanwhile in the leftosphere, Slate wet the bed. Can you imagine a world filled with unlicensed eyebrow threaders?! How… dangerous? 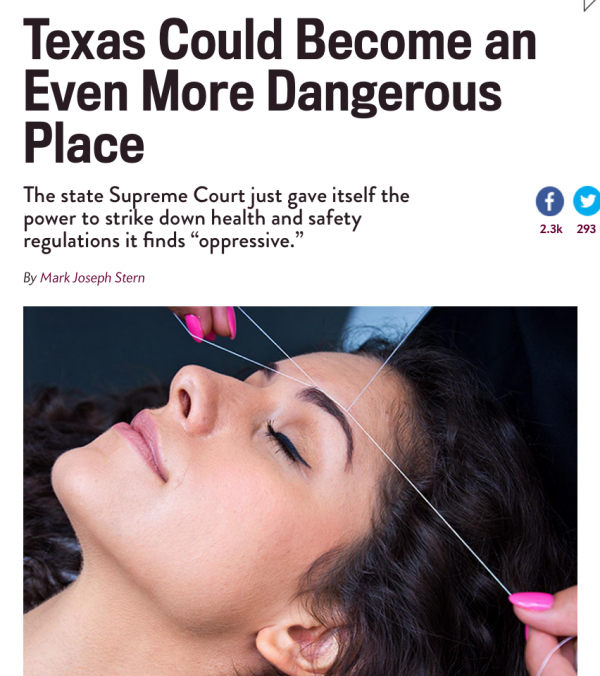 The post reads like one written by someone who’s never experienced eyebrow threading. Relatedly, it was written by a dude.

Threading eyebrows can be a dangerous business. Without proper sanitation, threading—a form of hair removal that uses thin strings to shape eyebrows—can spread highly contagious bacterial and viral infections, including flat warts, pink eye, ringworm, and staph. For that reason, Texas required threaders to undergo 750 hours of training in order to practice their craft professionally, the same amount of training that other cosmetology specialists must receive.

ut threaders didn’t like all that training—so they asked the Texas Supreme Court to simply strike the regulation down. In late June, the court obliged. It granted itself the power to strike down any health and safety laws it deems “oppressive.”

The startling decision revives a dangerous, widely discredited doctrine that gives judges authority to strike down economic regulations that interfere with the free market. By resuscitating it, the Texas Supreme Court has effectively declared that laissez-faire capitalism is the only true form of American liberty.

And then he rambles about the tyranny of courts deciding in favor of the free market. But it is Slate.

Good decision. As a licensed Professional Engineer since 1987, I would suggest there are desirable limits to the “free to practice without regulation” movement.

Frank, while I agree with you in part, being an engineer myself, the fact that some states require a PE to perform the duties of an engineer is very oppressive. The 5 year apprenticeship requirement is impossible for someone who has been working for many years in a state that doesn’t require it.

It granted itself the power

It seems that somebody at Slate can’t quite grasp that the Texas constitution has some relevance.

Open carry? Unlicensed eyebrow threaders! There will be blood in the streets! (But they will look good drowning it it! LOL)

This decision is not at all startling. General cosmetology training does not include eyebrow-threading, which is a very low-risk activity.

The overreach by bureaucrats in this case is similar to the Cornrow case in the District of Columbia, which yielded similar results.

Even judges know that Cosmetology Codes make sense in connection with the chemical treatment of hair, microdermabrasion, chemical skin peels and tattooing, but have very little to do with eyebrow threading and braiding.

Since when does striking down a regulation interfere with the free market?

Yeah, what about those oppressive health regulations threatening to shut down abortion clinics? Surely the courts can strike those down?

While Texas may have good gun laws, plenty of legislation has been passed to “protect” consumers such as the replacement of eyeglasses without a current prescription which is really the protection of optometrists to perform unneeded work.

Hoops to jump through is you buy an antique salvage car in order to obtain a title even though the statute of limitations has long passed.

And there are plenty more “special interest” revenue enhancing laws most of which were generated during the Perry administration.

Hopefully, Governor Abbott will work to overturn most of the nonsense…

It took me two hours to get past the “creepy” factor to read this. Nice decision. GrumyOne and Valerie made informative replies as well. Regulation whether through legislation or “civilian law theory” (unelected administrators) will always be subject to the human motive of greed and securing of rents by means of regulatory carveouts, and protections to the entrenched. For example in NJ physical therapists now have to have Masters degrees at least — a carveout for the higher educational careerists and financiers.

I hope it’s not too late to ask if its possible to use this method to put hair back in.