Unexpected thanks to Legal Insurrection on 2nd Anniversary of Zimmerman Acquittal

Unexpected thanks to Legal Insurrection on 2nd Anniversary of Zimmerman Acquittal

Zimmerman co-counsel Don West thanks Legal Insurrection for our trial coverage of the Trayvon Martin case. 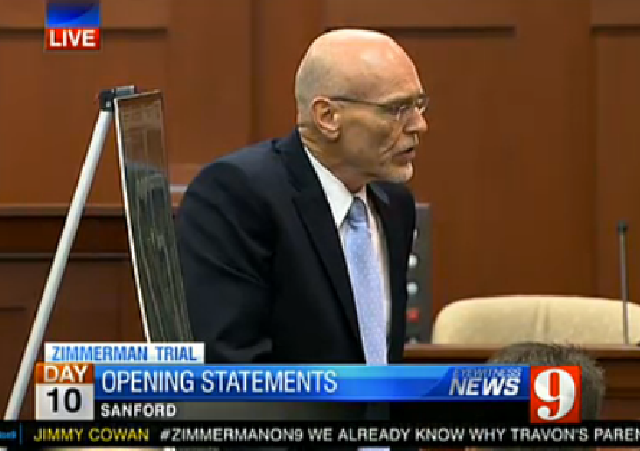 Has it really been two years since the jury acquitted George Zimmerman in the Trayvon Martin case?

Those of you who have been with us for over two years will recall our exhaustive coverage of the case, long before the trial.

Andrew Branca’s daily trial coverage was superb, the best out there by far. Andrew established himself as the authority on Stand Your Ground and the law of self-defense.

We had hundreds of posts, so it’s impossible to summarize them. You can scroll through the Trayvon Martin (including my coverage of the race issues) and Zimmerman Trial tags for pre-trial and trial coverage, and the George Zimmerman tag for all that has followed in George’s life.

The verdict came as a shock only to people who had not followed our coverage:

Here is a screenshot of our post of the verdict: 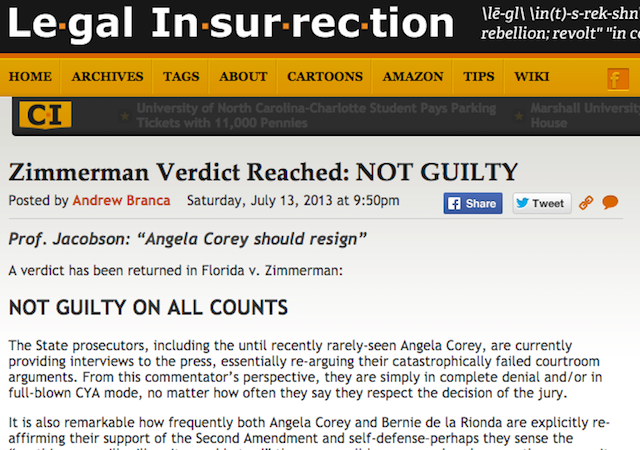 Mandy covered the social media reaction to the verdict.

Here was my reaction to What the Zimmerman verdict means:

I can’t add much to what I’ve written the past 17 months about the facts, evidence, law, witnesses, lawyers, judges, politics, and media.

So here you go:

Despite the heated demands of powerful societal forces and the State, six women just said No, and thereby did justice.

I was interviewed after the verdict, and had a chance to explain why the verdict was correct:

Andrew also was interviewed after the verdict, and once again explained what Stand Your Ground does and does not mean:

Andrew reminded me today of the second anniversary, in part because Andrew was contacted this morning, unsolicited, by Don West, one of the two trial attorneys for Zimmerman, and someone who has continued to represent Zimmerman in various legal problems. The two spoke for about 45 minutes, and West recorded this kind message:

This is Don West, co-counsel for George Zimmerman in the Treyvon Martin shooting.

Today is the second anniversary of George Zimmerman’s acquittal. Because of the hectic pace of the trial, I’ve only recently begun to review much of the coverage of the case; and I want to compliment Legal Insurrection, Professor Jacobson, and especially Andrew Branca for their exceptional coverage of the trial.

The facts of the case were reported fairly and accurately, and the legal analysis was always first rate.

Where so many news outlets and bloggers seemed unconcerned with the actual facts or the law, and were content to combine misinformation with their own misunderstanding, its obvious from the reporting that Legal Insurrection was genuinely interested in the truth and fully understood the legal issues of the case.

Your effort is truly appreciated. Thank you.

I came here two years ago on the recommendation of Kurt Schlichter, who said that no one who reads this blog should be surprised at the outcome of the trial. I did and I was not.

Yeeeeup. Unique coverage, I calls it. Nobody came close, except maybe Patterico (another lawyer), but that was a distant second.

TalkLeft was also very good. In fact, that is where I first encountered Mr. Branca’s writing on the subject.

Did I post at a site called “TalkLeft”? Doesn’t sound like me, but hey, stranger things have happened. 🙂

I’m not saying you wrote for them, but they used some of what you wrote.

You were mentioned and quoted.

Mentions and quotes are nice. Links and checks are better!

I think he was linked. Probably to LOSD. Probably got no check.

And Eric Zorn did a good job at the Chicago Tribune.

“But I didn’t know until this day, that it was Branca all along.”

Well deserved kudos to you, Professor, and Andrew.

The truth matters, as does the rule of law; you both stood by the truth and the law.

Best Conservative site on the Internet, since 2008. Thank you!

“Best Conservative site on the Internet, since 2008. Thank you!”

I’d agree to great, wonderful, awesome, etc., but I ain’t goin’ to “best” until I see some free doughnuts on the counter in the Commenter Lounge.

Oh. We usually hide them when we see you coming. Oops.

Unexpected Thanks to Legal Insurrection on 2nd Anniversary of Zimmerman Acquittal

The beginning of that trial, and Mr. Branca’s coverage of it, was when this blog went on my daily must-read list. And obviously, it’s never left!

Of course, that was meant to be a stand-alone comment and not a reply to myself >.<

A legal insurrection to preserve the principle of presumed innocence and the human right of self-defense. The cause to keep the amoral and opportunistic from running amuck is a worthy one. The recognition is well deserved.

Very nice compliment from one class act to another.

LI-“Bonus Melior Optimus” – as they say in the courtroom of public opinion.

I have to agree with one of the lines in the recording. The number of times I have to allow my head to be slammed into concrete before responding is zero.

I also ran into LI while browsing for the TM trail. The happy result was I found AB and the rest of the LI Gang. My life is now much more complete.

I have been with LI for a long time… how time flies when you are having fun.

Andrew, I am chuffed to think that Don West reached out and left that message for you and Professor Jacobsen.

I am not a legal person, I am not a citizen of the USA. I read your coverage with interest.

The argument for self-defence is a moral and legal right for persons who have been attacked and found themselves in a situation faced by Zimmerman. It can happen anywhere in the world.

George’s case is not unique, but what was unique about the case was the way in which this man faced a witch hunt by people who were distorting the facts of the case.

I can give another example, where a young man murdered his live-in partner. In this particular case I know more facts than probably what was revealed at the trial. The “victim” had been tormenting the young man and he lost his temper and hit her with the kettle. She died. The family of the woman were the ones distorting this particular case, when one considers that the reality happened to be that the young man was in fact the real victim until he lashed out. It was not fair that he was used as an example of domestic violence by the woman’s family…. the young man was convicted and sent to prison.

I don’t know if the claim is documented, and have no idea where to look to verify, but I’ve read that men and women start fights 50/50. Men usually end them.

That’s well-deserved praise from Mr. West, and he’s a class act for acknowledging the fact-and-law based coverage by LI and Mr. Branca. Few others in the media were even remotely fair in covering the case, or even tried to be, and AB always got to the heart of the matter with writing that was very informative and a pleasure to read.

Don West is a terrific lawyer who has earned the right to share many ice cream cones with his kids. And Legal Insurrection well what can you say? Professor Jacobson runs such a great blog that he can attract highly skilled talent like Andrew Branca.

These guys are guys you can go to battle with – honorable and fair.

BTW, your coverage of that case is what put LI into my favorites list. Best example of honest and good analysis in the face of media disinformation.

Best part was watching the media completely distort (and even reverse) a point that went to the defense.

You guys did an outstanding job.

It is because of the Zimmerman trial and LI’s coverage of the same that I have LI bookmarked — it is a site I visit daily. Thank you for taking the time to write so clearly about legal matters.

“I couldn’t help but notice that you have Legal Insurrection bookmarked. Do you actually find time to read it?”
“Every GD day!”

It’s nice to have one of the principals recognize your efforts – the Professor, Andrew, and others here – but the coverage at LI really stood alone.

First with the reports, live as it happened, right on the facts and law consistently throughout.

The ultimate tribute would be if Angela Corey went back and read it all, and finally resigned because of it.

Fond memories. I recall dropping in on LI on occasion before the Zimmerman persecution, but the quality and frequency of coverage sold me on this site, and continued solid coverage of similar persecutions since keep me coming back.

The first I heard of the Zimmerman case was about three weeks after the shooting. A prominent gun writer posted an article he wrote about the case in a firearms forum I was browsing, and the guy was tossing GZ under the bus. The sparse facts mentioned lit up my BS detector — the black grievance industry storyline, that this gun writer was buying and spreading just didn’t make sense. It didn’t take much effort to investigate the info available online to understand that something was terribly wrong with the mainstream media’s story.

Now, if only the Professor would take a class in remedial constitutional construction and issue a revised and this time credible analysis of the natural-born citizen clause … .

Kudos to both you and Andrew for being recognized for your good work. That’s why we keep reading.

Many thanks to LI for great coverage.

Like many others, the excellent coverage of the Zimmerman case as it unfolded is what first brought me here.

It’s very obvious Don West was an outstanding choice to represent George.It’s very easy to applaud his determination and dogged desire for a just outcome.

Thank you to LI for all your great coverage, that does discredit to the MSM and the poor job it does with their substantial resources. You put them to shame.

The facts in the case have not penetrated beyond the few sites that accurately reported them. Most people still believe all or part of the story Crump and Julison made up. It doesn’t feel much like winning to me, and while I am sure Zimmerman likes being out of jail, I doubt it seems like winning to him.

The Left hates this site and cannot make a coherent statement as to why. That’s enough for me. Love Branca’s write ups on anything to do with self defense.

LI’s coverage of this case was first rate. The Professor’s and Branca’s coverage was so refreshingly honest.

I’ve made some headway refering people to this site for “the rest of the story”. Some have actually come here and commented on how they never heard what really happened, reading other sources.

Many thanks to both the Prof and Andrew.