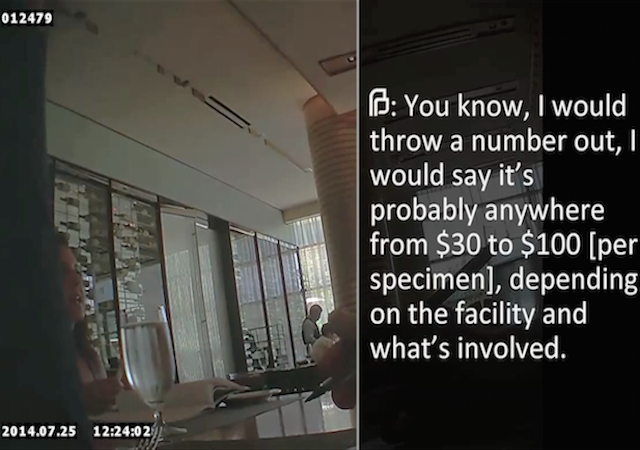 “We’ve been very good at getting heart, lung, liver, because we know that, so I’m not gonna crush that part, I’m gonna basically crush below, I’m gonna crush above, and I’m gonna see if I can get it all intact,” said Dr. Deborah Nucatola.

Democrats flocked to stand with Planned Parenthood, while Republicans spoke out en masse after watching the horrifying video footage.

Following the investigation, Texas Attorney General Ken Paxton called for an investigation into the sale of baby body parts.

“The Office of the Attorney General has launched an official investigation into Planned Parenthood following the release of a video that details the organization’s calculated slaughter of human babies to maximize the available body parts they plan to sell,” read a release.

“The video offers a glimpse into an organization that knowingly and deliberately destroys human life to further its bottom line.”

Texas was not alone in demanding a closer look into the largest abortion conglomerate in the country.

The same day, Congress also called for an investigation. The Huffington Post reported:

House Speaker John Boehner (R-Ohio) called for an investigation into Planned Parenthood on Wednesday after an anti-abortion group released an undercover video that claims to show that the family planning provider sells fetal body parts.

“When an organization monetizes an unborn child — and with the cavalier attitude portrayed in this horrific video — we must all act,” Boehner said in a statement. “As a start, I have asked our relevant committees to look into this matter. I am also calling on President Obama and Health and Human Services Secretary Sylvia Burwell to denounce, and stop, these gruesome practices.”

The House Committee on Energy and Commerce followed suit shortly after, announcing an immediate investigation into Planned Parenthood. “This video is abhorrent and rips at the heart,” committee Chairman Fred Upton (R-Mich.) said in a statement. “The committee will get to the bottom of this appalling situation.”

Planned Parenthood spooked by the prospect of more sting videos yet to be released (remember the footage released last week was approximately three years old), is feverishly spinning in the hopes of squashing the story.

Boehner called for an investigation! Well! Things will be set right now!

Yeah, the wholesale marketing of baby parts is the real crime. Although, it does offer an incentive for advocates and activists to promote the final solution. Baby steps, I suppose.

Preposterous! The real crimes here are:

1. Torturing an unborn child by crushing him alive and engaging in his vivisection;

2. Killing the child so that he never enjoys a day outside the womb;

3. Torturing the child for a longer period of time in order to retrieve his organs in marketable condition.

How do the Obama lines go? Oh, right: We’re going to get to the bottom of this. Errrr we’re going to hold those responsible for this accountable. Err, we will do what’s right.

Then do nothing. The public will forget in a week and all will be well.

Yea, investigation # 1357, no results yet, but they’ll investigate…

Should scientists ever invent a time machine I propose that everyone who believes in abortion should be put in the time machine and sent back to their mother’s womb to be aborted.

So, that’s why Planned Parenthood is on a marketing blitz to save its image.

They will always have Planned Abortion under the State-established sacrificial rites.

There may be more to come, judging from the tone of the news stories attempting damage control for PP.

Here is how the baby parts scam works: it is illegal to sell aborted parts for profit. So PP doesn’t “sell” them, they “donate”

… and if you don’t ‘donate’ some cash in return, PP’s ‘donations’ will stop.

Back where I come from (NJ), we call that scratch my back and I’ll scratch yours.

they “donate” them to a facility, but then charge certain fees for the use of their offices to pick up the parts for transport, and for preparing them for transport. These fees vary with the value of the parts being “donated,” coincidentally.

Of course this wouldn’t work for drug dealers – “No, officer, I GAVE Joe the crack, I just charged him rent for sitting on my couch for five minutes” – because the crime isn’t “selling” drugs but “distributing” them. But it’s different with baby body parts.

Juries convict people every day who are playing what they think are cute lil’ games like that.

The trick is getting Planned Abortionhood before a jury.

The rest will be easy.

Organ harvesting, at any age, is a felony in the United States, precisely because it is against US policy to establish a market in human body parts. That said, donations are acceptable.

The video does not establish that the transfers of fetal body parts was illegal, and indeed, if Planned Parenthood has followed well-known guidelines, their files will be full of properly-executed consent forms.

Further, the named charges for fetal parts sound remarkably close to the cost of sending the parts and a cover letter. These costs are trivial compared to the costs of a medical suite, equipment, and a physician’s time, not to mention the intrinsic value of the samples. Anyone who has purchased supplies for a medical or research company of any type will recognize that this is not pricing that reflects the cost of production of the fetal parts, or their value. It’s postage.

The doctor involved sounds like a doctor. Medical procedures are gross.

The real question is whether there is a quid pro quo somewhere. For example, do the purchasers make some sort of other “donation,” directly or indirectly, to obtain the body parts? Are purchasers pre-qualified by donor status?

Meanwhile, Planned Parenthood has produced “educational” materials aimed at children that are calculated to make those children more vulnerable to sexual predators, and it unquestionably funds actions that many Americans find abhorrent for religious reasons. This organization should be funded by wholly voluntary contributions, only.

“The real question is whether there is a quid pro quo somewhere.”

I dunno…this could be a clue…

“I want a Lamborghini”.

Hey, Kemberlee, did you see this? You made Ace Of Spades ‘Quotes of the day”:

Quote of the Day IV

The videos * make it pretty clear that Planned Parenthood researched the legal implication of all of this a long time ago.

The people from Planned parenthood keep on repeating that they are not actually selling body parts, and they don’t know they are being taped!

Yet they are out there pro-actively with their legal defense. (which probably means they spent a lot of money on lawyers, and I don’t know that anyone would do that for petty cash.)

In the final analysis, the legal theory that hey are relying on to say that this is legal may not in fact be correct, because there is something else going on, but it will be hard reaching that point.

If it gets questioned too much, they’ll just simply stop and that may take a lot of the energy out of any investigation, plus they’ll probably destroy records as they close that down.

I’ve known, or maybe better yet I shold say, have personal proof, that Planned Parenthood is a dishonest organzation since 1985 or 1986, when I read the Planned Parenthood abortion push-poll that they hired Penn and Schoen to take.

Let’s separate this issue into two parts. Part one, the harvesting, part two, the selling. Many of the comments above reflect acceptance of the idea of human status at conception. But, under our law, abortion is lawful until the fetus is medically viable. If a woman chooses a lawful abortion and parts of the fetus can help human beings, why just throw them away? So, I am not troubled by the first part, provided no woman is induced to have an abortion she doesn’t want. The second part, however, is the crime. Selling those parts for money, is intolerable. If that is going on, directly or indirectly, it should be stopped. If Planned Parenthood has been doing that, it must answer for it. But, let’s keep those two questions separate and not make this event an excuse to eliminate a woman’s right to choose. I support the viability standard and a woman’s right to choose, I do not, and cannot support the sale of what should be a great gift that can save human lives.