And C-SPAN is throwing their own pre-official debate party. Cluster much? 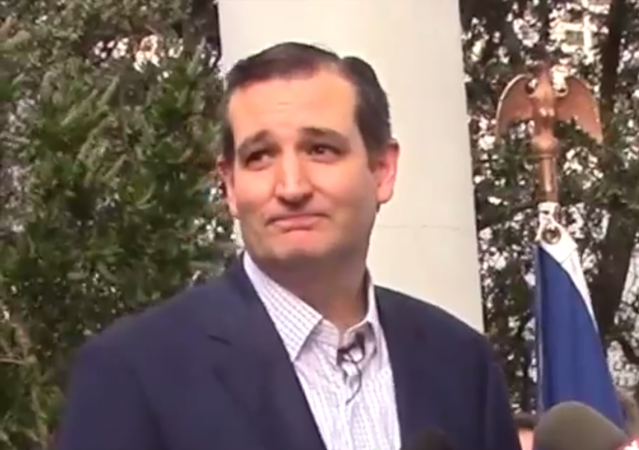 The first official debate was scheduled to take place August 6. Or at least it was until C-SPAN decided to throw their party first. Unlike Fox New’s debate stage which would only hold the top 10 GOP candidates according to national polling, C-SPAN invited all 17 contenders to their “Voters First Forum” to be held August 3.

Publishers at the New Hampshire Union Leader, The Post and Courier of South Carolina, and Iowa’s The Gazette say the forum was prompted in part by Fox’s controversial decision to cap the number of candidates in its Aug. 6 debate at 10.

“Fox says only the ‘top’ 10 candidates, as judged solely by national polling, will be allowed on its stage,” the publishers said in a joint statement. “That may be understandable later, but the first votes are half a year away and there are a lot more than 10 viable candidates.”

“The early primary process gives all candidates a chance to be heard,” they continued. “If networks and national polls are to decide this now, the early state process is in jeopardy and only big money and big names will compete.”

The statement reflects the concerns of many Republicans, who say the national media and unreliable early polls shouldn’t play a role in determining the top tier of candidates in a year when the GOP has a deep and diverse field.

Of those, only Carson is currently a lock to participate in the Fox News debate. The rest of the candidates will be working to raise their poll numbers to qualify for a spot on the debate stage.

Which might explain why Ted Cruz is challenging Fox News’ debate stage standards.

In a memo sent to fellow GOP campaigns on Wednesday, Chris Wilson, who serves as director of research and analytics for the Cruz campaign, called Fox News’ standards for deciding which national polls are used in its debate entry process “unclear.” Wilson asks the other campaigns to “consider joining with us” in encouraging the network to impose additional polling standards. As it stands, Fox News is allowing the Top 10 contenders, based on an average of the five most recent national polls, into the Aug. 6 debate.

“I’m sure you are aware, the standards set by Fox News for the first GOP Presidential debate are unclear and, it would appear, undefined,” Wilson writes in the memo.

Among the Cruz campaign’s suggestions: That polls included in the national average must have at least 1,000 interviews with primary voters and must be done by telephone (not online). However, no telephone poll conducted this year has surveyed that many GOP primary voters.

Wilson also suggests that, for a survey to be included in the national average, it must not be conducted on a Friday or Saturday — when fewer voters are home to answer the phone.

Fox News was not impressed and had a pretty sick burn in response to Cruz’s memo:

“I can’t wait until Senator Cruz is President, so he can tell all the networks how to run their business,” said Fox News Executive Vice President Michael Clemente.

Legal Insurrection has reached out to the Cruz campaign who, at the time this was posted, had not offered a comment. We will update should they respond.

Sorry, but Fox is not the Conservative movement, or vis-versa.

I’d be as apt to ignore (OK, boycott) Fox debates as anybody else’s, depending on how they were conducted and who was involved.

Using polls with a big field is just arbitrary. Most will have a margin of error of plus or minus 4% – meaning each candidate’s result could be up to 4% too high or low. At this point, only the top one or two would still be in the top ten if the polls overestimate their support, and nearly all the rest would be in if you added 4% to their result.

May as well draw straws.

This early, polls reflect little more than name recognition, which is why Trump, Bush, and Clinton lead in most.

Add the Clinton and Bush names to your list. Enough, already.

Okay, I upvoted before I saw you want to exclude Trump.

Trump is killing political correctness, and I want that thing killed, gutted, and hung up to dry.

I like Adrian Vance’s idea: The Debate Show. Perfect for our TV culture!

If there are 19 we could have one three way match and all the rest two headers to have nine debates, putting each on one night for a one hour debate. We could have a panel of political writers, hopefully an even mix of liberals and conservatives to score the debates, picking winners.

This would give us nine shows, and winners who would then debate other winners in four contests, with the first one a triad to eliminate the odd man. This would give us four more debates, with two winners and then the final with one winner! It could be 16 nights of TV that would be very good for the Republican Party and demonstrate far more “democracy” than the immaculation of Hillary! Just call it “The Debate Show.”

All good ideas, except having professional media judge and score them.

Hell no! Can you spell “bias”?

I’m kinda with C-SPAN on this with one big exception: It’s too early to have a debate. In another 3 or 6 months, half the candidates will have run out of money and there won’t be any need to cap the numbers or pay attention to polls – which is a horrible idea anyway.

IIRC, the RNC will blackball any candidate who appears in an unsanctioned debate, and not allow them on the stage ant any further debate.

So, by participating in the C-Span forum,Carson, Cruz, Christie, Kasich, Fiorina, Jindal, Graham and Pataki would be unable to participate on Aug 6, and CNN’s problem would be solved.

And the RNC’s problem would be starting.

Empty threat, especially if several of the major contenders ignore it. I understand the reasoning, last cycle was awash with debates, over 20 altogether. That’s too much. But they are trying to weed the field arbitrarily.

The democrats have a a talentless, corrupt, broken-down old crow that nobody wants.

We conservatives, on the other hand, don’t have a problem – we have an embarrassment of riches in our top candidates. And we have the luxury of time to shake-out the Goober Grahams.

So broadcasting primary Presidential debates is now a business ? who knew ? what a bunch of malarkey …

The GOP should control the debaters not Fox news …

Neither the GOP or Fox should control. Let the candidates appear as they choose. Love the idea of two at a time, etc. They need more time to present their positions and records.

The Republican Party doesn’t even control its own primaries. Most are open and socalled independents and other Democrats can vote in them. Why should they control their own debates?

What even makes you think that. They don’t control their own debates, I doubt that. We just don’t know what the rats had planed. I think they limited the number this year to protect the dim bulb Bush. I bet Jeb Bush is slow-walking his financial disclosure in case he needs to eliminate himself from the first debate to dodge Donald. If the RNC can toss someone out of the debates for joining C-span’s debate then I think they are trying to trick Donald Trump.

The Cruz is right.

The selection process plan is flawed, to say the least. Polling is easily fixed, and we all know it.

They already know who they want at Fox (and CNN, etc.) and they will just cherry-pick their polls to ensure they are the ones who make it to the debate.

The Cruz plan attempts to make the polling both meaningful and fair. Of course, we all know Jeb!(tm) and such won’t go along…….they are the pre-selected, the shoo-ins.

They all fear debating Cruz, I believe. Alan Dershowitz didn’t complement him for nothing!

The MSM is held in lower regard than Congress. No one trusts them. And the FOX VP has the gall to call out Ted Cruz for wanting to stack the deck?

I’m all for Fox changing their debate standards. Make ’em tougher. Ten people is still too many. Make it the top five or six, and let them actually have some time to express thoughts.

Or have three on successive days, with the same questions for all candidates, known ahead of time – all issues, no gotchas.

Divide them six-six-seven for the first series. If need be, use polls to thin them out, but not until November at least. Give them all equal exposure – else we are effectively favoring those with more money and/or the ones the media likes.

I would expect Cruz, Walker and Fiorina to look good, but I also expect Trump will attempt to dominate the proceedings, making an ass of himself to everyone except the Trumpalos.

That’s what the debates are for.

I want Trump in there so that the subject of immigration will be discussed; whether the other candidates want to or not, or whether the moderator wants to or not.

Without Trump, I fear any “debate” would be following collegiate fellowship hey-we’re-all-friends-here informal rules; i.e. they’ll all agree to leave some subjects off the table. Immigration is the subject that Trump is now riding to some acclaim, including mine!

Disappointment has been my result each time I put any faith in any TV “personalities.” Fox is better than the competition in some regards, but they also have their “guidelines.” (This is sometimes seen on The Five when the discussion gets heated, & obvious orders are being issued over the earphones; sometimes the actual truth gets out, for a moment anyway.)

Right now I’m favoring Trump (oh yes really, we need a wild card) as being the most electable, but I still hope that Ted Cruz can make headway, as he is by far the most constitutionally educated & most conservative candidate.

I’m also very much enjoying every encounter featuring Carly Fiorina; she has met many network dragons, and it inspires me how she pats them tenderly on the head and proceeds to mop the floor with them. Carly’s interview with the Couric idiot was hugely enjoyable, and Carly’s mastery of everything thrown at her by a hostile interviewer was most impressive. Warming to her, I am!

“’I can’t wait until Senator Cruz is President, so he can tell all the networks how to run their business,’ said Fox News Executive Vice President Michael Clemente.”
Oh, dear! Cruz can be critical of Democrats all he likes, making great theater for Fox, but if Cruz has the temerity to question Fox’s debate qualification criteria, woe be to him!

Polls of the general population are meaningless. Every poll should be based on people who are likely to vote in the various Republican primaries.

Polling done this early mostly measures name recognition. This is a big boost to political dynasts like Bush and Clinton, and billionaire TV stars like Trump, and an unfair advantage over candidates only more recently in the public eye: Cruz, Walker, Perry, Fiorina, etc.

Why not have 3 debates, 6 people each, chosen at random, over 3 nights?