Smart, down to earth, and approachable. 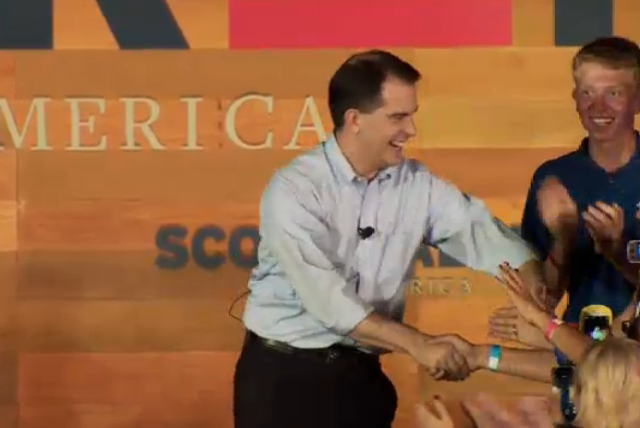 Scott Walker announced his run for president yesterday in a speech that was well received by many on the right.

Yet before he even announced, some pundits were calling him the front runner. On the FOX News program Political Insiders, analysts Doug Schoen, Pat Caddell and John Leboutillier cited a Real Clear Politics poll which puts Walker way ahead of the other candidates in Iowa.

Leboutillier notes that Walker understands the mechanics of a primary and the metrics associated with political advertising. Caddell suggests that Walker’s message is compelling, his victory over big unions is very compelling for Republican voters, and that he shouldn’t be underestimated.

They also address the ascendancy of Trump in the polls, but suggest things will shift once the Republican debates begin. Watch the whole segment below:

Rush Limbaugh has always said that the left will tell us exactly who they fear.

Jon Gabriel of Ricochet has tapped into that sentiment with a post on Walker’s announcement:

Introduced by his wife Tonette, Walker took the stage sans teleprompter and ticked off one conservative priority after another. It was a serious, straightforward speech delivered from — and to — middle America. It wasn’t flashy, but with his record, Walker didn’t need it to be. Think Cal Coolidge if he ate brats and rooted for the Packers.

Walker has spent one-and-a-half terms tipping sacred cows and winning three elections amidst the most toxic leftist attacks imaginable. Riots in the streets, court-ordered harassment of his allies, and threats on his family weren’t enough to make him back down. This steel makes Democrats and the media (but I repeat myself) very, very nervous.

Richard Trumka of the AFL-CIO union went so far as to call Walker a national disgrace, but one clever Twitter user has already addressed that issue:

My full statement on Scott Walker's upcoming announcement that he's running for president: "Scott Walker is a national disgrace."

Walker is a fiscal, economic conservative – but that is all.

He will be found to be moderate on social issues, at best. Which explains why establishment R’s like him as their backup-man should Jeb!(tm) fail to fare well in the primaries. Walker has flip-flopped on nearly all domestic issues including ObamaCare, ethanol, Common Core, and immigration. His foreign policy weakness, along with his VERY questionable choices on advisers and staff show, to me, he’s not quite ready for prime time, i.e. POTUS.

Love that GOT imagery. 😉

Scott Walker has a record filled with conservative accomplishments and a throne built from the skulls of his enemies. He’s actually walked the conservative walk in the land of the bleeding hearts. Your candidate has done what, exactly? Gotten elected to the senate? Filed for bankruptcy several times? Who is this wunderkind conservative hero of yours and how many skulls has he collected?

Tired of people denigrating Walker over “quotes” from anonymous campaign workers or a bad hire that he fired, or even a bad hire that doesn’t even work for him. You’re nipping at his ankles because you can’t answer his accomplishments. Trot out your superior candidate and we’ll see what they have accomplished beyond talking.

In terms of executive experience, profound successes, and adhesion to conservative principles, only Rick Perry and Bobby Jindal are on the same list as Walker. And they’re not at the top of the list.

I’m with Immolate. If you have a case for a better candidate, by all means, let’s hear it.

Just in case anyone is still confused by Scott Walker’s politics, there’s this; “You start in Iowa and lock up conservatives, because if you don’t do that, none of the rest matters,” said one longtime Walker adviser, who requested anonymity to discuss campaign strategy. “It’s much easier to move from being a conservative to being a middle-of-the-road moderate later on.”

Number of presidential candidates who ran one way for the primaries and another way for the general election:

Exactly, since Nixon developed the strategy for 1968 anyway.

Even Obama sold himself in 2008 as “post-partisan” and reaching across the aisle.

There seems to be a horde of political “mechanics” that control various levers of GOTV efforts, and that have the right pedigree/badges to massage the money men. Running for president apparently means dealing with many of these entrenched characters.

I don’t know that first hand, but when Flynn ran against Boehner’s establishment pet LaHood, LaHood/Rauner had tied up the power guys, even one I think Flynn thought he had.

It was a little like that with the Fannie/Freddie debacle, they had bought up all the lobbyists, so their leveraged game went on and on, since so much money was flowing.

I think Hillary money will more corrupt than Obama, even foreign, and we need a champion. Money will be involved. I don’t see Walker as being so moderate, and union pensions are a huge issue to tackle. But we have time to judge on the other issues. Jindal has sounded better recently, he just doesn’t seem to resonate well. Cruz is great, but maybe too hated already by RINO’s, to where they’d kneecap him and kiss up to Hillary.

I’m still for Walker/Fiorina, at the moment. She’s smart and tough and identity politics will be an issue. She had a Facebook post making the rounds, asking for $3 or whatever to help get her on stage. I sent her $9. I’d have to look more closely at her for president, but she is on top when it comes to skewering Hillary over the last few months.

Sorry, but LaHood was running for the seat his father held for more than a decade and before that Bob Michel held for nearly four decades. It’s a moderate Republican stronghold and always has been.

The idea a political newcomer would run a Tea Party campaign and win that district primary was never anything but fantasy. It was on the order of self-delusion that led some to believe Christine O’Donnell could be elected statewide in Delaware.

I live here and disagree … but Flynn didn’t have time, and LaHood had the big money, and support. There was a lot of local discussion about it being fed to us, and people are fed up with the establishment candidates. That’s why Rauner won, but establishment for the state overall means Democrat.

It was an uphill battle anyway, but mostly because of the big money and establishment support of LaHood, shortened notice, and that Flynn had lived in DC for quite awhile. But certainly not because the district belongs to moderates. Deals were made to keep some contenders out, that could have split LaHood’s vote.

This was not going to be a statewide election, and if Flynn won the primary, he would have won the general. LaHood was prearranged.

I’m one of them evil Gubbamint Public Employees and I don’t like my union, I like Walker. If I could quit paying dues for “common expenses” I would. I already refuse to pay their PAC. Walker/Perry 2016

This guy has the demonstrated ability to deal with our most pressing economic problems, in adverse circumstances. This cannot be an accident.

If the Repubs run him, he will win.