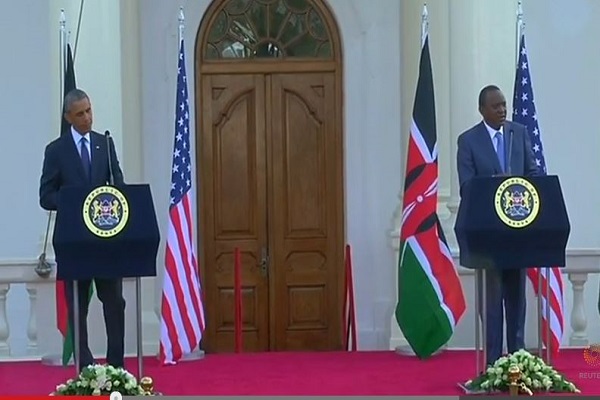 Obama’s first trip to Kenya since becoming president has highlighted the disappointment that many Africans feel in his presidency.  While President Bush earns high praise and achieved a great deal in Africa, particularly with regard to his efforts fighting AIDS, Obama . . . not so much.

Beneath the ecstatic welcome President Barack Obama will receive when he arrives in his father’s homeland of Kenya on Friday is a lingering sense of disappointment.

More than the first black president, he’s the first African-American U.S. president, and that’s accentuated a frustration among many Africans — and some Americans — who see his record on the continent over the last six-and-a-half years as modest at best and falling short of the successes of his predecessor,George W. Bush.

“There’s been a feeling that up to now, maybe he hasn’t really achieved all the expectations,” said Witney Schneidman, who’s done extensive governmental, non-profit and corporate work in Africa and co-chaired the Africa Experts Group for Obama’s 2008 campaign.

Part of the disappointment is exemplified in the following quote in Dovere’s piece:

“Africans had in general an utterly unrealistic sense of what it meant for the American president to be of African-American descent,” said John Campbell, a former ambassador to Nigeria under Bush who’s now at the Council on Foreign Relations. “That the president had a Kenyan father, many Africans seemed to think he was somehow going to be their president. When lo and behold he remained the president of the United States, they were disappointed. That’s more of an Africa problem than an Obama problem.”

Reinforcing this deep connection, Obama declared himself the first Kenyan-American president of the United States.

Prior to Obama’s visit to Kenya, Kenyans warned Obama not to try to push a gay agenda:

Kariuki added that Obama should not use the visit to “talk about the gay issue.”

Irungu Kangata, a lawmaker in President Uhuru Kenyatta’s The National Alliance (TNA) party, said, “We are telling Mr. Obama when he comes to Kenya this month and he tries to bring the abortion agenda, the gay agenda, we shall tell him to shut up and go home.”

Kangata, according to The Standard of Nairobi, said Kenyans would protest against Obama over the gay agenda issue while he visited their country.

“Anybody who tries to come and preach to this country that they should allow homosexuality, I think he’s totally lost,” said TNA lawmaker Jamleck Kamau, according to The Daily Nation. “And I would also like to add, our son from the U.S., Barack Obama, when he comes here, to simply avoid that topic completely because Kenyans will not be happy with him if he comes to bring the issue of homosexuality in this country.”

“Liberal thoughts are being entertained in some countries under the guise of human rights,” said Justin Muturi, the speaker of the National Assembly, to an Anglican Church congregation. “We must be vigilant and guard against it. We must lead an upright society and not allow obnoxious behavior as we have a responsibility to protect our children.”

Obama ignored this advice and proceeded to urge Kenya to toss out their religious and moral values in favor of his own sense of “fairness,” a sense of fairness and interest in human rights that he seems rather selective about sharing.  For example, Obama apparently didn’t deem Iran’s record on gay rights worthy of discussion during the Iran nuke talks.  But in Kenya, he has no such qualms.

President Barack Obama nudged African nations Saturday to treat gays and lesbians equally under the law, a position that remains unpopular through much of the continent. Obama’s Kenyan counterpart responded by calling the matter a “non-issue” for his country.

Obama tackled the sensitive matter on his first full day in Kenya, the country of his father’s birth. He drew on his own background as an African-American, noting the slavery and segregation of the U.S. past and saying he is “painfully aware of the history when people are treated differently under the law.”

“That’s the path whereby freedoms begin to erode and bad things happen,” Obama added during a joint news conference with Kenyan President Uhuru Kenyatta. “When a government gets in the habit of treating people differently, those habits can spread.”

Kenyatta was unmoved, saying gay rights “is not really an issue on the foremost mind of Kenyans. And that is a fact.”

Actually, they lucked out.
And anyway, isn’t pushing the gay agenda in a country riddled with aids somewhat counterproductive?

AIDS was and is primarily a transsexual disease. It would be antithetical to public health if they normalized/promoted transsexual behaviors.

Barry must be speaking of his administration’s efforts in the USA, correct?

He couldn’t get elected dog-catcher in his home country Kenya. But here we elect him president here. Twice.

I guess they don’t buy that Hope and Change crap either.

Methinks you meant “allowed them to steal…..”

Wow. Who knew Kenya was chock-full of racists? I’ll bet the Kenyan people watch reruns of “The Dukes of Hazzard” and have Confederate battle flag decals on their pickup trucks.

One of the things that I REALLY hate about the gay marriage hoopla is the way everyone’s acting like “Oh, yeah, I’ve believed this my whole life! It’s the only moral way to think!” (Just like Obama himself does!)

Now we’re doing it on a global scale! Gay marriage has been recognized in America for about five minutes and we’re already charging all over the globe screaming at other countries, “What the hell’s wrong with you? Get with the gay program!”

I despise that sort of sanctimonious blather.

There is a strong aversion to gays in America’s black community. His criticisms of Kenya’s attitude toward gays would go over worse on Chicago’s South Side.

There wasn’t a word about this in our talks with Iran.

Africa should be happy Obama’s spent his time in office screwing up America and not their countries.