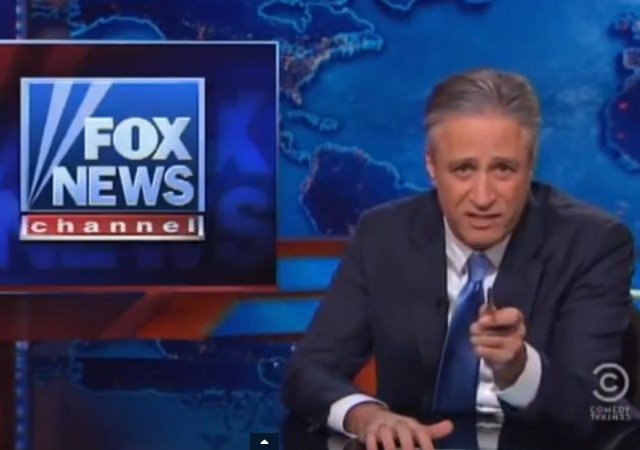 This is probably…not…groundbreaking news, but just in case you haven’t heard: comedian and talking head Jon Stewart serves at the pleasure of the Obama White House.

Perhaps that’s overstating it. Stewart may not jump at the behest of 1600 Penn, but the influential celebrity certainly enjoyed a level of access to the President not often experienced by even the most established members of friendly mainstream media outlets.

It was Politico’s scoop:

Jon Stewart slipped unnoticed into the White House in the midst of the October 2011 budget fight, summoned to an Oval Office coffee with President Barack Obama that he jokingly told his escort felt like being called into the principal’s office.

In February 2014, Obama again requested Stewart make the trip from Manhattan to the White House, this time for a mid-morning visit hours before the president would go before television cameras to warn Russia that “there will be costs” if it made any further military intervention in Ukraine.

To engage privately with the president in his inner sanctum at two sensitive moments — previously unreported meetings that are listed in the White House visitor logs and confirmed to POLITICO by three former Obama aides — speaks volumes about Stewart and his reach, which goes well beyond the million or so viewers who tune into The Daily Show on most weeknights.

Love Stewart’s jokes or hate them, he has proven to be a unique voice who is capable of turning in-the-weeds policy discussions into viral video sensations that the country is still talking about the next morning.

Real talk: Stewart is influential. His brand of humor, satire, and snark connects with audiences in a way that traditional political commentary usually doesn’t. He’s not easily pigeonholed as a common liberal troll; throughout his career, he has lampooned politicians, activists, and media flacks on both sides of the aisle (though there’s a valid argument to be made that, in the end, progressive bias came out on top.)

The Daily Show, which will air its final episode with Stewart behind the desk next Thursday, filled a void for younger demographics, and created an aura of accessibility around the guests and issues Stewart chose to feature. Many of my friends and colleagues have admitted over the years to getting their news from Stewart as opposed to a newspaper or cable news show, and they never seemed to be particularly bothered by Stewart’s propensity to color his commentary with how he felt about a particular issue on any given day.

Bias is a reality, and when it comes to popular culture, it’s almost unavoidable—but the relationship between Stewart and the White House is something else entirely.

Comedy is an effective buffer against criticism, and now we know that there was a coordinated effort to control which Administration foibles got ha-has, and which were exposed for actual critique. It’s not a particularly shocking revelation, but it does serve as one more layer of slime covering the travesty that is the relationship between liberals and the media.

…but not all media! Behold:

Not in his house. That spot is reserved for friends of a failed administration.

‘OK, Leibowitz, umm, err, Stewart, are you for or against Israel!?’

….”one more layer of slime covering the travesty that is the relationship between liberals and the media….”

Well we know he didn’t get and keep that position because of any talent……… at least not talent in humor…….

What a happy lil’ fantasy… Barracula meeting with Neal Boortz.

I would PAY for that U-tube video! Gladly…!!!

Yes, Jon Stewart is a shill. But David Brooks is a pimp.

No, David Brooks is a whore. He’ll say and do whatever his bosses (pimps) at the NYT tell him to.

Lil Stewie Leibowitz is Barry’s Mimi Alford(JFK). Wonder if Lil Stewie even head to get on his knees?

Stewart is the Josef Goebbels of the Obama administration, except that Goebbels was more honorable than Stewart in that Goebbels never attempted to hide his slavish devotion to his fuhrer, and conducted his propaganda campaigns out in the open.

Jon Stewart is the Planned Parenthood of the Media/Democrat-Party/Industrial-Complex.

Wow. That’s just … psychotic. Stewart is a whore for the administration, true, but he’s no Goebbels.

Get a grip. Seriously.

The most frightening aspect of the future of elections in this country is that more young people cite The Daily Show as their primary news source than any other broadcast, cable show, or newspaper. And then we badger them to get out and vote!

The good news is we’ll be rid of both of these vermin before too much longer.

Stewart has mastered the use of subtle propaganda.

Who didn’t know this?

Some monk on a mountain somewhere maybe.

Is that way all those media folk got worn out pants in the knees?

Jon Stewart On White House Visits: ‘Something Is Not A Secret Just Because You Don’t Know About It’
http://crooksandliars.com/2015/07/jon-stewart-white-house-visits-something