“Give me two minutes.” 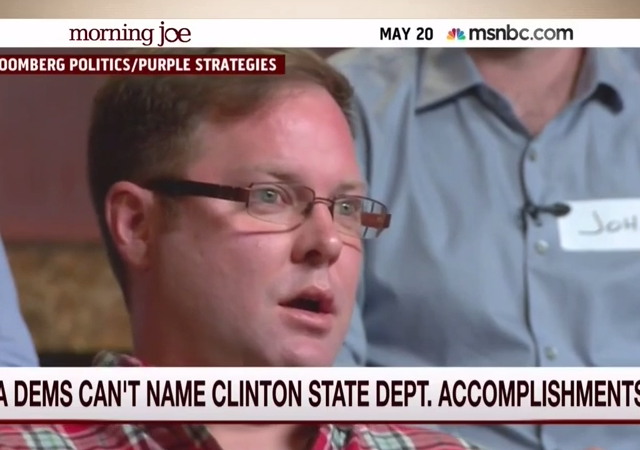 MSNBC’s Morning Joe recently asked a panel of Iowa Democrats to cite something, anything, that Hillary Clinton accomplished in her role as secretary of state. The silence was deafening.

Daniel Halper of the Weekly Standard:

In a video played this morning on MSNBC, Iowa Democrats were not able to name an accomplishment of Secretary of State Hillary Clinton, the presumptive Democratic presidential frontrunner…

“I really can’t name anything off the top of my head,” one voter says after letting out a long sigh.

Another asks the interviewer, “Want to give me a minute? Give me two minutes.”

Facts are stubborn things, but if failures count as accomplishments there’s hope for these Iowa Democrats.

Jennifer Rubin of the Washington Post is a helper:

It’s not too early to remind voters of the list of her failures — lack of preparedness in Libya, misjudgment as to al-Qaeda’s strength, the absence of a coherent plan to address the Arab Spring, a faulty assessment of Bashar al-Assad (whom she labeled a “reformer”), deteriorating relations with Israel and an obsessive focus on settlements, and cluelessness that withdrawal of U.S. forces in Iraq would give the radicals a foothold. And while the media and her potential Democratic rivals won’t do it, it’s time to force Clinton to align herself with or reject the premises that now are the foundation of the Obama foreign policy:

Does she actually believe Iran wants to be a normal nation state and can be a constructive force in the region?

Does she believe we can maintain traditional alliances with Sunni states and Israel while ignoring Iranian aggression and giving the mullahs a pathway to the bomb?

Does she think we should leave Assad in power, resigning ourselves to years more of bloody civil war?

Does she think it appropriate to excoriate the Israel prime minister for comments he has attempted to clarify and to threaten the Jewish state with loss of diplomatic support at the United Nations?

Does she think the National Security Agency surveillance program is working, or does it need to be hamstrung or even dismantled?

Do we need boots on the ground in Syria? If not, does she think we are winning the fight and winning quickly enough?

If that’s not enough, here’s an assist from Howard Dean via the Washington Free Beacon:

Howard Dean: No Surprise Nobody Can Name Hillary Accomplishments, People Couldn’t Name Mine Either

Dean said when he ran for office, voters couldn’t name his accomplishments either.

she got 4 people killed in Benghazi, and then lied about it.

she broke federal record keeping laws and security regulations by keeping government communications on a private and insecure server.

The Most Transparent Sec. of State ever.*

*transparent to the Russians, the Chinese, etc.

She is the single worst, and most public submissive personality in American history.

She is the EXACT opposite of a “strong woman”. Her main legacy is decades of facilitating really BAD men, and corrupt lining of her and Dollar Bill’s pockets.

I heard of one Hillary supporter on TV saying, essentially, it was sexist to demand Hillary have a reason for running, because the “clown car” Republican candidates are such poor excuses for humanity and wastes of oxygen that she should not require one.

Well if that’s how you want to roll, sure.

I think that this is the strategy of presenting a smaller target for one’s enemies coming back to haunt you. That’s her choice and her consequences.

I can offer one rather remarkable achievement of Hillary Clinton. In an era of extreme divisiveness and political polarity, an end to which she has always worked tirelessly, Hillary Clinton managed to build a stunning political coalition by putting all Americans, from the hardest right conservatives to the leftmost on the scale, into full bipartisan agreement on one extremely important issue: everyone now agrees… Hillary Clinton has achieved nothing and is therefore not qualified to be president of the United States.

Can I get a halleluja?

Another asks the interviewer, “Want to give me a minute? Give me two minutes.”

I wonder whether this voter was, consciously or unconsciously, referring to Eisenhower’s infamous quote about Nixon, “If you give me a week, I might think of one”. (Eisenhower held a weekly press conference, so he meant a week literally, at the next occasion. But this deeply damaged Nixon’s campaign, and was even brought up in ’68.)

cite something, anything, that Hillary Clinton accomplished in her role as secretary of state. Why limit it to that role? I’d like someone to name one thing she has ever accomplished, in any role she has ever held.

cite something, anything, that Hillary Clinton accomplished in her role as secretary of state.

Why limit it to that role? I’d like someone to name one thing she has ever accomplished, in any role she has ever held.

If you think about it, the Sec State job is actually one where it’s normal to rack up impressive accomplishments. Trade deal there, peace treaty here…