Democratic Congressman in the crosshairs. 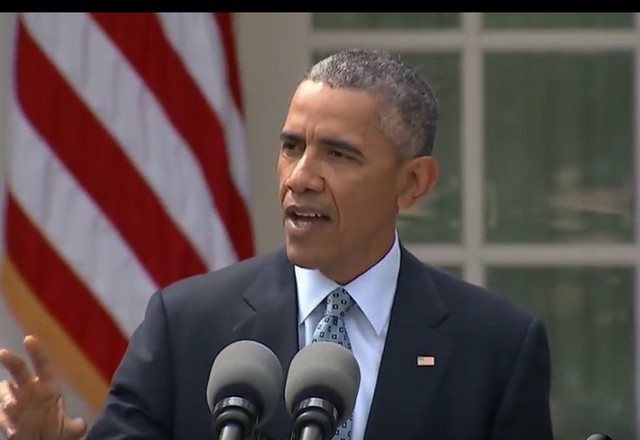 Adam Kredo of the Free Beacon obtained an e-mail threatening Democratic legislators who have doubts about the nuclear deal with Iran that the administration is negotiating.

“Democrats in Congress are the only remaining obstacle to finalizing today’s historic deal,” Zack Malitz, campaign manager for CREDO, said in a statement emailed to reporters on July 2, along with a note that details of the email were not to be published until a deal was actually announced. “Every Democrat should go on the record right now in support of the deal, and pledge to defend it from attacks in Congress.”

The Free Beacon cited a source who observed that this kind of political threat was consistent with the administration’s mindset.

“This is exactly what you’d expect from the deal-at-any-cost lobby,” the source said. “The White House lied to Congress about what it would deliver and doesn’t have anything left than its raw political power.”

The Free Beacon report comes just after Bloomberg reported that an effort to promote a nuclear deal with Iran has been funded with millions since 2003.

Advocating for an Iran truce is a loose coalition of peace groups, think tanks, and former high-ranking U.S. diplomats bound together by millions of dollars given by the Rockefeller family through its $870 million Rockefeller Brothers Fund. The philanthropy, which is run by a board split between family members and outsiders, has spent $4.3 million since 2003 promoting a nuclear pact with Iran, chiefly through the New York-based Iran Project, a nonprofit led by former U.S. diplomats. For more than a decade they’ve conducted a dialogue with well-placed Iranians, including Mohammad Javad Zarif, now Tehran’s chief nuclear negotiator. The Americans routinely briefed officials in the George W. Bush and Obama administrations, including William Burns, Obama’s former deputy secretary of state. Burns hammered out much of an interim nuclear agreement in secret 2013 talks with his Iranian counterparts that paved the way for the current summit in Vienna, where Secretary of State John Kerry leads the U.S. delegation.

The Rockefellers’ Iran foray began in late 2001, after the Sept. 11 attacks. Stephen Heintz, president of the Rockefeller Brothers Fund, convened a board retreat at the Rockefellers’ Pocantico Center in Westchester, just north of New York City, to consider new approaches to the Islamic world at a time when the U.S. was focused on the threat from al-Qaeda. One invited speaker was Seyyed Hossein Nasr, an Iranian-American professor of comparative religion then at Georgetown University. “He got me thinking more and more about Iran, its geostrategic importance and its relationship to the Sunni world,” says Heintz.

These lobbying efforts are just the latest in what Sohrab Ahmari termed The 36-Year Project to Whitewash Iran in the June issue of Commentary.

What’s astonishing about these efforts is that when it was reported that AIPAC would be fighting the administration’s efforts to appease Iran, a high-ranking official of the National Iranian-American Council (NIAC) responded, “Our community needs to be better equipped to win the high stakes battle underway that will decide between war and peace between the US and Iran, and to do so against well-funded political interests who are investing millions in killing an Iran deal. As the saying goes, you don’t bring a knife to a gun fight.” (NIAC was found to have violated lobbying rules and was later ordered to pay $183,000 to cover the legal costs of a man it had defamed.)

Nor has the president been immune from suggesting that somehow he’s fighting the influence of big money. In January when he (unsuccessfully) attempted to dissuade Democratic senators from supporting any sort of oversight legislation, he said that “he understood the pressures that senators face from donors and others, but he urged the lawmakers to take the long view rather than make a move for short-term political gain, according to the senator.” It was a crude attempt to smear anyone who disagreed with him (and likely aimed at Sen. Robert Menendez (D – N.J.)), who rightly took offense.

The disingenuous attempt of a leading advocate for the anti-American regime in Tehran to portray himself as an underdog is laughable, especially when the president of the United States is on his side.

What’s remarkable is that there are no compunctions among the MSM to suggest that Israel has too much influence in the formation of American policy, but there next to no scrutiny of those who promote rapprochement with a terror supporting, Mideast destabilizing, repressive, theocracy.

Whether or not there’s a deal this week we will continue to see the administration and its allies playing hardball and trying to marginalize anyone who dares question its wisdom.

The Iran Lobby targets congressmen who oppose giving a nuclear weapon to our mortal enemy? Wow, in a normal world you might expect said congressmen to wear that like a badge of honor, regardless of party affiliation.

Shouldn’t we be lobbying these congress members?

This is good. Progressives will be ‘taking note’ of which Democrats vote for or against the Bill.

I thought the Secessionist Party (formerly known as the Democrat Party) ARE the Progressives.

Maybe the first mistake is ALLOWING an “Iranian lobby” to exist.

I mean, just think how a “German lobby” would have gone over during WWII.

There will be a war whether they like it or not.

Iran’s the one bringing the fight. I say pre-emptively glass em.

Malta says Republican opposition to the Iran deal will take us to war. Let’s remind him of Churchill’s words to Chamberlain when the prime minister returned to England with the Munich agreement: “You were given the choice between war and dishonor. You chose dishonor and you will have war.” But the war Obama will have invited will first be against Israel and only later against the United States.

“bound together by millions of dollars given by the Rockefeller family through its $870 million Rockefeller Brothers Fund. The philanthropy, which is run by a board split between family members and outsiders, has spent $4.3 million since 2003 promoting a nuclear pact with Iran”

Now, if anybody on the left ever, ever complains about Citizen’s United again, I will point them to the Unions and their political efforts and the incorporated charities like the Rockefeller Bothers Fund.