“There’s no making nice with a radical regime that has sworn us off as an enemy.” 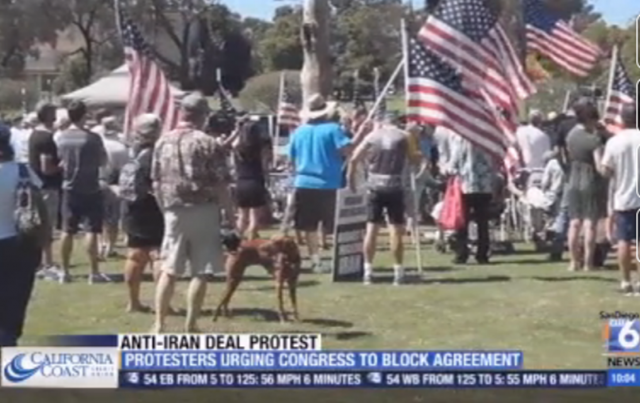 When all is said and done, one feature of Obama’s presidency that will stand out is the sheer number of citizen protests against his policies.

Such protests began in 2009, when regular Americans organized to protest federal fiscal policies, tax increases, and Obamacare. In fact, Professor Jacobson was recently treated to a taste of the zaniness our San Diego Tea Party groups often faced, in the form of progressive demonstrators protesting the American Legislative Exchange Council (ALEC) event he was attending.

However, showing that not all Californians are crazy, concerned citizens gathered in Balboa Park this weekend to protest the administration’s latest pet project: the proposed nuclear agreement with Iran.

About 500 protesters came together Sunday in Balboa Park to speak out against the pending nuclear weapons agreement with Iran, a centerpiece of President Barack Obama’s foreign policy.

The Stop Iran Now event was organized by StandWithUs, an international nonprofit organization that is pro-Israel and headquartered in Los Angeles, the site of another rally also held Sunday. Both rallies were part of a larger initiative with the Jewish Rapid Response Coalition, the same group that organized a protest in New York City’s Times Square last week that brought out thousands of protesters.

….“Today is of monumental importance,” Sara Schoonmaker, associate director of StandWithUs San Diego, said Sunday. “There are only 48 days left until Congress decides the fate of the nations. Does that sound overly dramatic to you? It’s not. Congress right now has the decision to fast track Iran into nuclear weapon capability or to stop Iran’s nuclear progression. It’s either stop or go. There’s no in between. There’s no making nice with a radical regime that has sworn us off as an enemy.”

“I do not think this Iran agreement is a good thing at all,” she said. “That we would even lift sanctions and that we would sit down and talk with these people that say that they want to wipe Israel off the map, and that we’re the great Satan and they’re the little Satan, that has me very troubled.”

Last week, we reported on another Stop Iran Rally that took place at Times Square, which included speakers such as former Congressman Allen West and Fox News contributor Monica Crowley.

As an added bonus, there was an even better turnout at another protest in Los Angeles!

A crowd of well over 1,000 gathered outside the Federal Building in West Los Angeles to demand that Congress vote “no” on the nuclear deal with Iran–and to override President Barack Obama’s anticipated veto. The majority of participants were from the local Jewish community, but there was also a significant Christian presence, as well as participation from Muslims opposed to the Iranian regime.

“I don’t mind the military option. I’m not gonna lie to you,” said Reza Farahan, one of the stars of the hit Bravo reality TV series Shas of Sunset, in his remarks to the crowd. Indeed, there was almost as much opposition expressed towards the Iranian regime as towards the lopsided deal it struck with world powers earlier this month. Los Angeles has a large Persian immigrant community, composed of people of many different backgrounds, most of whom left Iran in the wake of the Islamic Revolution in 1979, leaving careers and relatives behind.

I suspect Obama will ignore these protests, just as he did those opposing Obamacare. Hopefully, state and local politicians will then work to protect American interests…doing the work our Commander-in-Chief won’t do.

Now we just need these non-stop following all the Obamas on all their non-stop vacations!

These protesters need to learn how to protest. Don’t they know that if they refrain from looting, burning buildings down, setting cop cars on fire, and assaulting others that they won’t be heard?

Well, those tactics seem to work everywhere else lately.

“one feature of Obama’s presidency that will stand out is the sheer number of citizen protests against his policies.”
And that fact makes obama especially proud.

“one feature of Obama’s presidency that will stand out is the sheer number of citizen protests against his policies.”
And it’s done a fat lot of good, hasn’t it. The more we speak, the less They listen.

There is one problem. What is expected as a result of the protests? The Democrats are laughing about them, and the Republicans will not oppose Obama on anything. And they have proved it since the election.

We are not going to be able to vote our way out of this.

“There’s no making nice with a radical regime that has sworn us off as an enemy.”

Just noticed that tagline. I have to ask, are they referring to the Iranians, the US government, or the Republican National Committee?