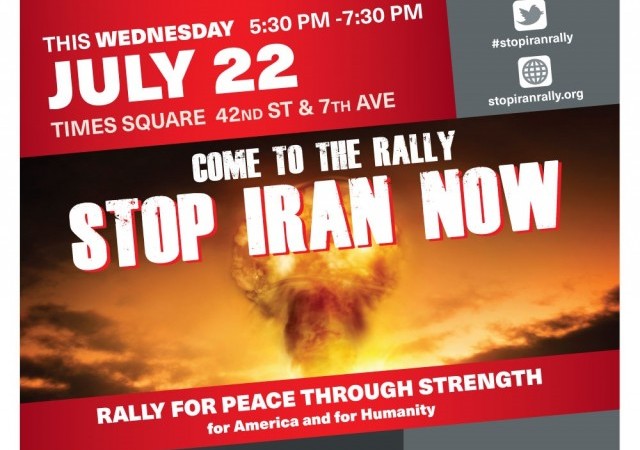 Dozens of organizations have come together to emphasize the danger Iran poses to Israel and the international community. To that end, they’ve joined forces to host a Stop Iran Rally in Times Square.

The Stop Iran Rally has an impressive list of speakers: 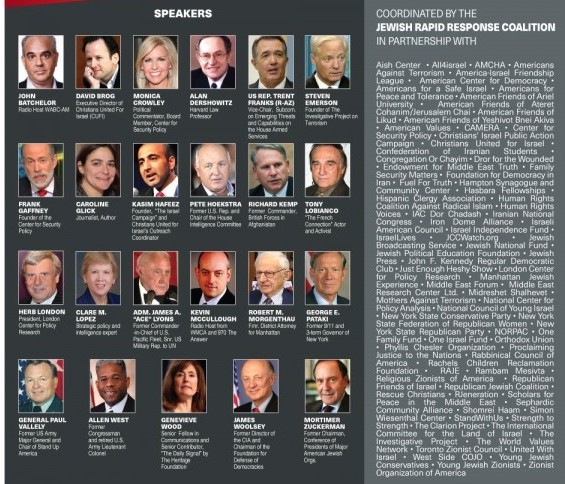 A few hightlights from the rally:

Cavuto’s crew checked it out, too

Note: no dems in attendance. In particular, camera-hog Schumer is nowhere to be found.

This should spell the end of the Democratic Party. The secret side agreements keeping the main secret test site off limits ought to do it.

I pray the Iranians are far enough away that they will not have a deployable weapon in the next 549 days, and the next President can do the right thing.

I also pray for the many innocent, pro-American souls in Iran who have been condemned to perish by this President’s cowardice.

“[C]owardice.” Is that how you spell “treason”?

Consider the Constitutional definition. “Treason against the United States, shall consist only in levying war against them, or in adhering to their enemies, giving them aid and comfort.”

Now it may be argued that the President has the right to decide who are our “enemies”. But if that were true, it would render meaningless one of the grounds for impeachment of a President: Treason.

Also, the definition of enemies does not involve the concept of a declared war.

So what is an “enemy”? How about a nation that preaches, “Death to America”? And supports terrorism against Americans and American interests. Sound familiar?

Sure would be nice if a blocking number of Senators didn’t support this treason.

The military site I think, is supposed to get a clean bill of health and then be left alone.

It is Israel that has escalated nuclear weaponry in the M.E. They obtained their nukes by deception, now they complain about Iran?

Israel has not signed the Nuclear Non-proliferation Treaty and has not allowed IAEA inspectors into their facilities.

Israel wants America to fight and finance a war with Iran.

Israel is not an ally of the United States.

We are their host and they our parasite.

Fixed that for ya’..

Screw you., You are our parasite.

Israel is not announcing daily its intent to nuke Iran or any other country off the map. Israel does not have as part of its founding constitution that any other country ought to wiped off the map. Israel goes to war only in self-defense. Israel is a free parliamentary republic in a region where theocratic dictatorships are the norm. Israel treats women and ‘infidels’ like human beings.

As for allies, Israel is very much an ally of the US. It is only Obama that views Israel as no longer an ally.

Put up some links to Israel’s weekly “death to America, death to Iran” national rallies, especially held in their places of worship.

Are you REALLY this obtuse, or are you just trying to throw gas on a fire?

Either way, you’re a punk.

Radio host John Bachelor is one of the featured speakers, so hemay recapitulate some of that on his show

Article 26 contains a clue as to how the U.S. can still unilaterally impose or maintain sanctions on Iran.

Allen West is the MAN.

I sure hope President Walker finds a place for Allen West in his administration.

lenape1969 (or barrysoetoroobama1964) seems to have a problem with Israel demanding military superiority over Iran. He seems to think it is unfair.

It is when the more peaceful power has military superiority that you get peace, or less deadly wars.

So, yes, of course, Israel is demanding it remain militarily superior to Iran.

That’s the policy of the United States, too, both for itself and for Israel.

Even under Barack Obama.

One of the problems with disarmament in the 1920s and 1930s was the idea that all powers had a right to complain about being militarily weaker. (the agreements nevertheless kept the U.S. and Britain in a stronger position, but later the appeasers let the disproportionality lapse.)

You get security either from the nature of the possible advesary regime, or by an imbalance of power in your favor.