In Memory of Ali Dawabsheh and Hadas Fogel

In Memory of Ali Dawabsheh and Hadas Fogel

What kind of person does such a thing? 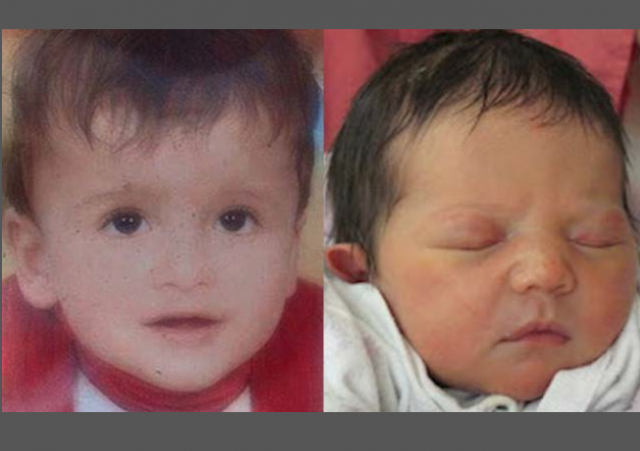 Today was one of those terrible days I’m glad I was traveling for.

That seems to be a pattern for me; I was traveling on the day of the Newtown, CT school shooting, and other incidents that I don’t have time to dig out of the archives.

Very early, before 5 a.m. Eastern (when I left the house,) I saw tweets about a firebombing of a house near Nablus in which a very young child, Ali Dawabsheh (one and one-half) was murdered.

While the perpetrators have not been captured as of this writing, the Israeli government and IDF are calling it an act of “Jewish terrorism.” The word “revenge” was spray painted on the wall in Hebrew. Ali’s father Saad and mother Riham, and 4-year-old brother Ahmad, are in the hospital in very serious condition with life-threatening burns.

The attack was condemned by all facets of Israeli society including the Prime Minister and political leaders, as well as Jewish organizations around the world. There is a lot of soul searching going on.

By the time my travel ended mid-afternoon, the internet was behaving as the internet does, with political gain and exploitation being sought all around.

When I heard the news, I recalled the 2011 murder of the Fogel family, in which five of seven family members were stabbed to death: Udi Fogel, 36, Ruth Fogel, 35, and their children Yoav, 11, Elad, 4, and three-month-old Hadas.

Two Palestinians entered the Itamar settlement, and killed the parents in a struggle and two boys (11 and 4) as they slept. They left, but returned when they heard 3-month old Hadas crying; they stabbed her to death in her crib. Two other children escaped and alerted authorities.

The attack was condemned by the Palestinian Authority.

When captured and put on trial, the terrorists expressed no remorse, and said they did it for Palestine.

When the terrorists who killed Ali are captured, assuming they are Jewish extremists they probably also will not express remorse, and will say they did it for Israel, or God, or something.

In writing about the death of Hadas Fogel, I asked: What Kind Of Person would do such a thing?

The same question can and must be asked as to the murderers of Ali Dawabsheh.

Monsters exist in every population.

Some populations have more than others.

some populations encourage and conceal their extremists. These should be rooted out and removed

The circumstantial evidence does not support reaching a conclusion.

What kind of people?

The same kind of people who we’ve been watching in videos all of the past week who hold the same regard and value for life while they perform the selection of fetus parts to be sold on the premise it is for their cause of ________,,fill in the blank.

The kind of immoral people who will always justify depraved acts for the purpose of advancing their position all the while the left with their damnable hypocrisy, pontificate about “white privilege” and political correctness giving these immoral acts a nod and a wink.

Sadly, such barbarism is the norm for human existence.

There’s a reason Western civilization is exceptional, and America most exceptional of all.

But of course “exceptional” means just that, not the norm.

Human civilization is merely deviating back to the mean. Barbarism.

Now, can someone get this very simple explanation of “American Exceptionalism” to the Commander in Chief? Seems he missed out on the Western Civ classes.

James Madison The Federalist Papers Federalist No. 14
Categories: American Exceptionalism, American Revolution
Date: November 20, 1787
Happily for America, happily, we trust, for the whole human race, they pursued a new and more noble course. They accomplished a revolution which has no parallel in the annals of human society. They reared the fabrics of governments which have no model on the face of the globe.

This smells badly of a “False Flag” operation.

It would not be beneath Hamas, Islamic Jihad or Al Quds brigades to foster an attack upon their own people in order to give “justification” to continue the rocket attacks against Israel. Worse still, use the death of the child as a rally=call to riot against Israel, force the Israelis to attack protesters and then go to all-out war.

I’m going to withhold judgment on this one until we get a confirmed “I did this because ‘x’ and a confirmation of the citizenship of the assisains.

While I wouldn’t go that far, I will say that western nihilists on the left bear an equal amount of blame for this in demanding that Arabs be patronized to the degree that they are in the name of western “guilt.”

Chuck, I was thinking the same, but just did not want to say it. We know that Islam supports what has been referred to in the West as a “Death Cult” because some Muslims do not place any value on life. Why else would Palestinian mothers be proud of their sons who have murdered innocent Jews in a terrorist attack? More the better if they became a martyr for the cause.

Let the perpetrators be caught and justice served, whether they be Jew or Palestinian.

Deliberate attacks on civilians are barbarous, no matter who the perpetrator, and must be condemned by civilized men.

Western Civilization has shared with the world our bounty and our technology in the spirit of what Lincoln called “the better angels of our nature.”

Our weakness, perhaps, is in underestimating the baser demons of human nature, even in ourselves.

Our challenge was well defined by Kennedy: “With a good conscience our only sure reward, with history the final judge of our deeds, let us go forth to lead the land we love, asking His blessing and His help, but knowing that here on earth God’s work must truly be our own.”

When your government refuses to protect you or does a lousy job of it, you have a natural right, in fact a moral obligation, to protect yourself.

I understand Jewish terror exists, but at what rate relative to Islamist terror? I assume even if normal by population size the rate of Jewish terror acts on Islamists is low. That’s not to excuse it, but just to put the problem into perspective.

Yes, you do have a right and duty to protect yourself. And that includes striking back at the enemy. But that does not include setting fire to an inhabited home. If this really was done by Jews it’s inexcusable.

PS: I supported the “Terror Against Terror” network in the ’80s. And while I don’t think Dr Baruch Goldstein entered the Cave with the intention of killing anyone, I think if he had he would have been justified. But this is completely different, which is why I don’t believe the fire was set by “Jewish extremists”.

I hate to break thread but I got to chime in on the Cincinnati I been trying to get someone to validate what I saw that is very compelling evidence car moving he was dragged . Look at silver car at top of hill (later another car we disregard )look how close he is to that when he falls off car , he is at least half the distance and on left of road

This story is being carried in the San Diego Union-Tribune today, complete with statements from the Israeli government that the attacks appear to bear the marks of local Israeli extremists. Netanyahu and Rivlin visited two of the victims at the hospital, and a police spokesman said the firebombing bore the markings of the “Price Tag” group.

When it looks like an Israeli committed a crime against a Palestinian, Israeli officials admit it. They call such acts “crimes,” and they prosecute them as crimes.

If only the Palestinians would do the same.

Because of its historical rarity and the lone wolf nature when it does occur, the very term “Jewish terrorist” is jarring to read, unfamilar.

Let’s wait to find out who really did this heinous deed. Pallywood has produced enough of such productions that waiting is not unreasonable.

Nobody should be a victim of such violence.

So far there doesn’t seem to be any evidence that any Israeli did this. As usual, the Israeli government and army have rushed to apologize, and if it later turns out that Arabs set the fire, or it was an accident, the damage will have been done.

Just look at how they mishandled the case of Little Saint Mohammed al-Durah (reference to Little Saint Hugh intentional.) With the Israeli government and army admitting they killed him, naturally everyone took it for the truth, and I’ll bet over 75% of people who saw that story on their front pages still think the IDF killed him.

Why don’t we wait for the facts before condemning anyone.

PS: There seems to be some ridiculous assumption out there that Arabs don’t know how to write Hebrew!

1. Outright false flag. The PA or some faction thereof decides to create a martyr, sets the fire, and sprays the graffiti.

2. The fire was set for some internal reason that had nothing to do with politics. Perhaps the father owed someone money, or had defiled someone’s daughter, or got involved with the wrong people. His enemies set the fire and spray the graffiti to put the authorities off their scent.

3. The fire was an accident, the baby died, and then someone (whether from the family or not) sprayed the graffiti.