What Kind Of Person

What Kind Of Person 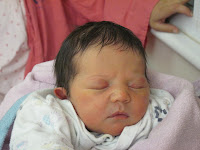 Children have been killed in war before, unfortunately.

But the thought of the person or people who stood over her, and what was going through their minds as they cut her, is just unimaginable.

More of the photos released by the grandparents and a photo of Hamas members celebrating with candy in Gaza, at Israel Matzav.

The people that do this are not the lowest form of human life. They are merely the second lowest.

The lowest is reserved for the Europeans that support the P.A. and Hamas as well as Americans (like Obama) that think we need to get on their good side.

Maybe I'm guilty of libel, but I'd say the candy being handed out was made with the blood of viciously murdered Jewish children.

All that's left is for the UN to condemn Israel for provoking this.

How can anyone not see the poisonous and degraded nature of the culture of Palestinian radical muslims?

I was trying to educate the anti-Israel hip/edgy/cool/envelope-pushing/free-thinking twentysomething self-labelled "anarchist" (you get the picture) in our office one day.

He laughed and responded, "If the Palestinians unilaterally disarmed, they are the ones who would be slaughtered!!"

He told me never to talk to him again and proceeded to plug his ears with his iPOD earphones.

It's maddening trying to talk to people like this and to politely show them how their beliefs and worldview are completely wrong and illogical. I really blame our schools and our media for poisoning the minds of so many of our young today. They are playing with fire.

A grandmother myself, my heart breaks. As a human being, I denounce the perpetrators of this crime against humanity. As a Christian, I weep.

LukeHandCool-I'm always amazed when I come up against people who support terrorists. I wonder, is there worldview so warped and skewed by the media and others, or do they truly believe that by supporting the terrorists they will receive preferential treatment? Do they think they will be exempt from their wrath because they can say "look, I'm on your side!"?

If September 11 and events like this prove anything, it's that no one is exempt from their wrath. They didn't target the neocons in the WTC and the Pentagon, they targeted the PEOPLE in those buildings. The Palestinians don't target the Israeli soldiers or politicians, they target the PEOPLE. When all is said and done, those liberals crowing about Israeli genocide are nothing more than base infidels in the eyes of the radical. Lower than even the basest form of life, worthy only of forced conversion, killing, or enslavement.

Those kind of monstrous actions on another human being has to take brainwashing, or they just happened to have recruited an inhuman sociopathic predator.

What kind of person? A monster.

What kind of people celebrate it? The lowest, most disgusting examples of humanity.

What kind of person? A Palestinian Muslim.

After all this is hardly the first time they've deliberately targeting children, or even infants. Remember Shalhevat Pas?

For those of you who still mouth platitudes about the 'two state solution' think about it…do you really think merely making yet another part of the Middle East judenrein is going to magically change this poisonous culture?

Q: "What Kind Of Person
stabs a three-month old infant to death?"

A: A rabid animal.

Solution: Such animals should be put to sleep.

They're worse than animals. Animals do everything instinctively; that's their nature. These people have to be devils.

This is Islam at its finest. This is the religion Liberals fall all over themselves to defend while attacking God, Catholics, Jews, America, Democracy, Conservatives, Capitalism, and the US Military.

This is hardly the first time some grotesque act of sheer savagery has been greeted by the Palestinians as a group with candy and cheers. It happens time and again–it seems to have gone down the memory hole that there were spontaneous demonstrations of glee after 9/11. Yet it is somehow the Israelis who are the obstacle to peace and the Palestinians who are innocent, put upon, and wishing only peace.

Another question that just occurred to me-what punishment do you mete out to someone like this? Death seems almost too good for them.

These are the same people who danced in the streets on 9/11/01. As long as they celebrate barbarism, I will lend NO credence to any arguments they make about alleged Israeli injustice.

Massacre of the Israeli Fogel family

As for "these are the same people dancing in the streets after 9/11"…"these people" were doing the same thing in the streets of Paterson, NJ on 9/11. (I lived in NE NJ 1996 – 2007) It was kept very quiet, of course; the police shut down streets into that city, and not a word was reported on it. I got the story from a cop from another jurisdiction. That was the last time I drove through Paterson…

Jihad is right here, brothers and sisters. Taqqiya is a way of life. Don't doubt it. You can't erase 1400 years of proof.