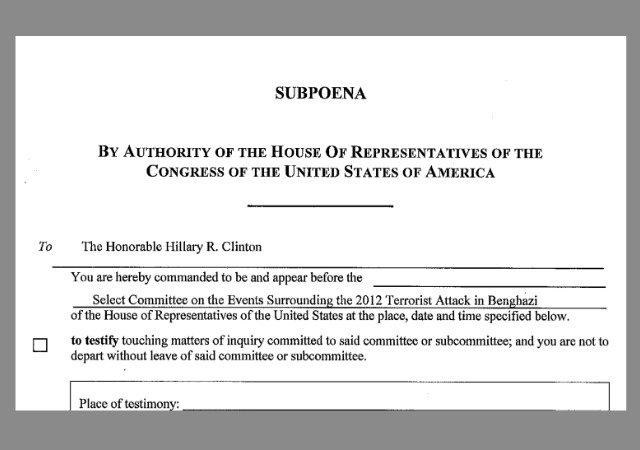 In a train wreck of an interview with CNN Tuesday, Hillary Clinton made some colorful claims.

CNN’s Brianna Keilar asked Hillary what lead her to delete 33,000 emails. Avoiding the question, Mrs. Clinton rambled on about how technology is hard and was finally redirected by Keilar.

“But you said that they [former Secretaries of State] did the same thing. That they used a personal server, and while facing a subpoena, deleted emails from them,” interjected Keiler, engaging Hillary Death Stare Sequence Phase II.

“You know you’re starting with so many assumptions that are, I’ve never had a subpoena, there is no, again, let’s take a deep breath here,” said Mrs. Clinton, obviously rattled and speaking to herself.

Here’s the thing though… she was subpoenaed.

Oh, and here’s a link to the subpoena.

The Select Committee on Benghazi issued a fact check of their own:

The House Select Committee on Benghazi today released its March 4, 2015, subpoena to former Secretary of State Hillary Clinton in response to her inaccurate claim she had not been subpoenaed. The committee subpoenaed Clinton directly after it became aware of her exclusive use of personal email and a server and that the State Department was not the custodian of Clinton’s official record. The State Department failed to reveal this essential information to the Benghazi Committee or any other investigation into the Benghazi terrorist attacks until days before a media outlet was going to publish the information, meaning no investigation prior to the Benghazi Committee’s had access to the Secretary of State’s communications as part of its review.

“The committee has issued several subpoenas, but I have not sought to make them public,” said committee Chairman Trey Gowdy. “I would not make this one public now, but after Secretary Clinton falsely claimed the committee did not subpoena her, I have no choice in order to correct the inaccuracy. The committee immediately subpoenaed Clinton personally after learning the full extent of her unusual email arrangement with herself, and would have done so earlier if the State Department or Clinton had been forthcoming that State did not maintain custody of her records and only Secretary Clinton herself had her records when Congress first requested them.”

“The fact remains, despite when this subpoena was issued, Secretary Clinton had a statutory duty to preserve records from her entire time in office, and she had a legal duty to cooperate with and tell the truth to congressional investigators requesting her records going back to September of 2012. Yet despite direct congressional inquiry, she refused to inform the public of her unusual email arrangement. This information only came to light because of a Select Committee request, not a voluntary decision to turn over records almost two years after leaving office, records which always should have been in State’s custody.”

“Moreover, the timing of the Secretary’s decision to delete and attempt to permanently destroy emails is curious at best. The Secretary left office in February of 2013. By her own admission she did not delete or destroy emails until the fall of 2014, well after this Committee had been actively engaged in securing her emails from the Department of State. For 20 months, it was not too burdensome or cumbersome for the Secretary to house records on her personal server but mysteriously in the fall of 2014 she decided to delete and attempt to permanently destroy those same records.”

I can’t imagine lying about lying will help Hillary’s trustworthiness problem, but maybe that’s just me. It’s almost like we’ve seen this before…

But let the record show, Hillary was in fact subpoenaed.

Nick Merrill, a spokesman for Clinton’s campaign, said Wednesday that Clinton “was asked about her decision not to retain her personal emails after providing all those that were work-related, and the suggestion was made that a subpoena was pending at that time. That was not accurate.”

The Benghazi committee did not issue a subpoena until March, “months after she’d done that review,” Merrill said.

It’s just a fact. No reason to include it in the narrative.

“Gasp” The Hildabeast lies? Who’d thunk? She will lie to anyone to further her agenda and the compliant/complicit media is right with her in total support. That agenda is the Presidency of the United States and quite possibly a dictatorship in the vein of Eva Perone.

* – edited for a family blog

The subpoena was addressed to the “Honorable Hillary R. Clinton”.

She has plausible deniability on the honorable part.

I love it when liars are caught in their lies.

For some, it won’t matter in the least, because they love lies and live by them. You can’t help them.

For others of us, it hardly comes as a surprise, but it never comes as unwelcome news. It’s like the sun rising in the East. It affirms what we know and expect.

For still others, it CAN…maybe…be a revelation. And that is no bad thing.

Well, I’ll give her credit; she never gives up. She’ll shovel that old manure with both hands, and try to move some with her feet too. Sisyphus merely had to roll a boulder uphill forever; Hillary! has to roll utter balderdash.

But that’s the only positive I see in Hillary! In all other respects, it’s genuinely horrifying that anyone like her could be even a footnote in American political history.

Ole Slick Willie learned the tricks of the trade from a tried and true professional. Makes one think that Bill was the pimp for the Hildabeast, instead of the other way around and he got sloppy seconds.

Yeah like the Slickmeister saying he did not have sex with that woman (Monica) on nationwide tv. Who is going to believe that load of male bovine excrement? The ardent Killary supporters like Alan Colmes and Chris Matthews will wholeheartedly.

It is a sign of political ineptitude to tell such easily checked lies. She just provided yet another awesome soundbite-sized bit of proof of her mendacity.

She cannot think on her feet. At least.

Someone need to tell Hillary how you get to be president.

You fill your mouth with marbles and then you start talking.
First one marble falls out and then another. When you’ve lost all you marbles you’re a celebrity president.

Slick Willie’s Response: You see it depends on which definition of subpoena you use. When most people think of subpoenas, they come from judges and courts but this one came outta congress. I mean nothin that comes out of congress is legally binding anyway… Right?

Someone show me some evidence those emails were actually deleted. How is she supposed to leak snippets of them to the press, or use them for blackmail, if they no longer exist?

I think they’re still there. I mean, Hillary said they were deleted. That’s as close to proof positive that they were NOT deleted as you’ll get!

Martha Stewart and other high profile people have gone to jail for lying. They did not even get this close to the egregiousness of what Killary has done and will continue to do. Yet, the wrath of the Feds fell on them like a ton of bricks. Will the Hildabeast get the same treatment? It is highly doubtful.