Hey, Carly Fiorina? You don’t have to do this.

Hey, Carly Fiorina? You don’t have to do this. 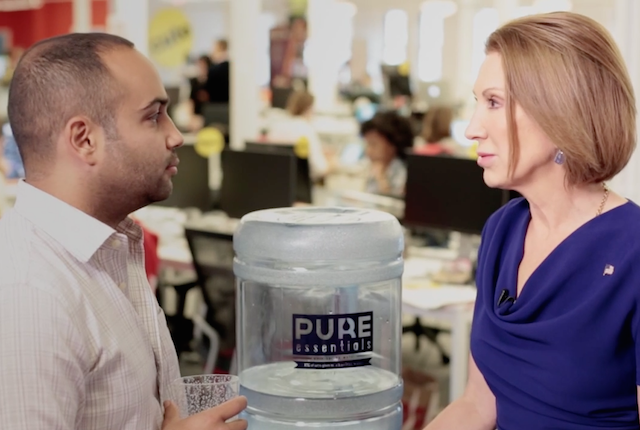 Carly Fiorina has joined the Buzzfeed Video cast of players in a new promo spot Buzzfeed is flogging as an effort “to show the men of BuzzFeed what it’s like to be a woman in the workplace.”

I’m sure you know what’s coming.

I sat at my desk for a good ten minutes working through my feelings about this one. For years, I have encouraged Republicans to be bold with their messaging, to branch out to different markets, and to stop taking themselves so damn seriously all the time.

Humanity goes a long way when it comes to connecting with voters and gaining trust on a more personal level. The most successful candidates are those who are able to create an emotional connection, whether it be through humor, tenderness, or shared anger over the direction our country is going.

Buzzfeed should have worked for Carly Fiorina—here’s why it didn’t:

Carly is funny, engaging, and smart—but she used that power for evil. She walked into a young, modern, progressive venue, and threw her own womanhood under the bus in an effort to pander to a base that will never vote for her.

Fiorina has defined herself as a businesswoman, CEO, and force to be reckoned with; she should not have to—and should never (NEVER)—have to play into the hands of liberals who work every day to manufacture divides in our society.

As Professor Jacobson once said with regards to conservative candidates going on shows like Letterman, that exposure comes with a price. Generally hostile venues are always risky venues; it doesn’t mean we should never walk the fence, but we should be careful about who is waiting to catch (drop) us on the other side.

Ted Cruz also did a video with Buzzfeed, but in my opinion it worked much better than Carly’s because it was pure goof. When people remember Cruz’s Buzzfeed debut, they’ll think about a silly guy doing some Simpson’s impressions; when they think about Fiorina’s, however, they’ll have the inequality narrative reinforced in their heads—which will lead them straight down the path to a vote for a Democrat.

Actually, I don’t see what you see. I looked at the objective that Buzzfeed set out, and had they put a no-name actor in Carly’s role, it wouldn’t have had the punch. She may have been the HP CEO, but in today’s millennial world and the audience that is Buzzfeed’s, CEOs are not off a Mad Men set, but more approachable and visible among their staffs. Good for Carly that she took that step and went on Buzzfeed. And regarding voters, I think Carly connects more with the Uber crowd, than Hillary ever will.

Amy, I do enjoy reading a lot of your Articles. You are clear, concise, balanced, analytical; and, over all an excellent writer. However, with this Article regarding Carly Fiorina and BuzzFeed, you are dead wrong (for all kinds of reasons). Right now, I do not have time to elaborate on the reasons (that I believe) you totally missed the mark on this one. However, I will return later this evening to explain.
As always though, I just love “Legal Insurrection,” even on the rare times that I may disagree!

I agree with the article. This is not going to help Carly. One of the problems CF has is her website, extremely uninformative (given all the op-eds she has written and all the speeches she has given over the years that are on youtube.) If she is to be the “tech” candidate, she should have more than a 1 page website.

She probably listened to a GOP consultant of the likes of bozos Karl Rove and Steve Schmidt.

Yeah, democrats will vote for her. Right.

Carly’s depiction of inequities suffered in the workplace can be picked up and put down in more places than just the “office”. She used her classic Carly wit in taking aim at this; It’s funny and resonates at many levels on being a woman in a “man’s world”, where all things which should be equal, there still exists a male mindset when working in male dominant territory. Carly did a great job using humor calling it out for women who find themselves too many times placed in the position of “go along” to “go ahead” as shown by the reactions by the men when their bias is turned back at them. Silent.

First off, much of the bias is presumed. Women hear these comments or similar and think bias, misogynist, glass ceiling.

Treat a woman special and you’re pandering. Treat them like as you would a man, you’re being hateful and biased.

All depends on the interpretation.

That she went thru with this with a known liberal political spin outfit is a disqualifier for me.

I was in her corner and thought the RNC would look foolish to let FNC rules keep her out of the debates. Now? I don’t care.

She’s just another panderer who seems to think that men are pigs and aren’t worth the trouble to be diplomatic.

Respect must be earned. Disrespect is available for free.

Daily Mail hit piece makes Carly Fiorina out to be like Abortion Barbie?

I don’t know how to measure this, as to how it will influence that “feminist influenced” voter, who might be swayed by Carly that “get’s it”, despite being in the old white male party (in their view). Will soccer moms and female professionals listen more if they think Carly relates with them? I know conservative professional women (FB friends even, one a lawyer) that agree with Carly’s general tone here.

It is gender politics that allows CF to be aggressive in attacking Hillary, and this ad gives her a little more “feminist” clout as someone who gets it. In her book she says as CEO of HP, a client was coming and they sort of uninvited her, since this guy liked to go to some strip club. iirc, she decided to go instead of be aced out.

So there is some there, there. But on the other hand, the main tech stock guru I used to read thought she was a terrible pick for HP (though that she did OK on some fronts). My opinion is she was partly “diversity hire”, but “now with female CEO” had some sales value for HP, in feminist glory days. Carly deflects criticism of her HP time, and may have some good points, but overall I think she was not fully ready for the job, although a quite qualified woman. (Not all boardroom warfare is due to gender issues)

A couple decades ago I used to hang with a bunch of oil company guys, geologist types. My neighbor was a top boss geo-physicist, and felt women were often pushed ahead too quickly (for their own good and the company’s), trying to increase female management numbers.

And that’s always the issue with these culture wars … there is usually something to it, but forcing underqualified people ahead based on race or gender or sexual preference makes for bad results and animosity from those skipped over. Then those that are pushed ahead get an “attitude”. (e.g. most Democrat non-white or non-male or non-straight politicians)

To me Carly is just pointing out she is aware, in humorous fashion, but is not tying herself to any quota mandates or calling all men pigs. As long as she keeps attacking Hillary, and holds some conservative views on other issues, this maybe helps Fiorina’s stance, as she fences with Hillary. (which for now I see as her main role)

Huh? Carly felt she had to “show men what it’s like to walk in these shoes?”

She rose from an entry-level position to the level of CEO. She earned 7-figure salaries and stock-option packages.

WTF are she and the progs talking about? This is complete nonsense.

If you are going to be an establishment Republican you have to pander. It’s a requirement.

So far, Trump and Cruz are the only GOP candidates to speak out on the Chattanooga Marine murders.

I’m with Amy. I felt insulted as a woman watching that. Carley, as intelligent and competent as she is in a business setting likely got some of her advancements due to her looks and how she managed a pair of high heels. Good for her if she did it tastefully and in a way that emphasized her employer’s wisdom in hiring her.
The questions about family life bothered me most because they are VALID for an employer to ask, especially of women with children at home. The mother is more likely to take off time from work to care for her children. We’re mothers. We manage but it’s still more of a struggle with women with children than it is with men who have a family. That’s just reality. She bought into every single stereotype that conservatives reject and made a video validating them. I’m disappointed.