Ted Cruz auditions for The Simpsons

Ted Cruz auditions for The Simpsons 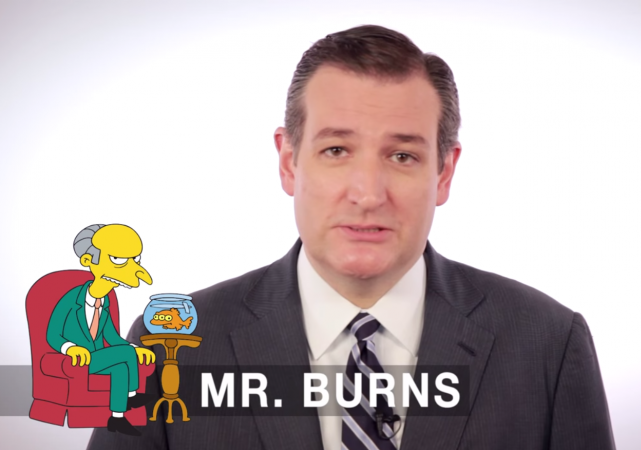 Presidential hopeful Sen. Cruz is a long-time fan of The Simpsons.

In April, Sen. Cruz joined the crew at The Federalist to chat about his favorite episodes show off a few of his best impressions. “Cruz talked about how much he loved “Round Springfield”, the episode where Jazz musician Bleeding Gums Murphy passed away, imitating the voices of James Earl Jones as Mustafa, Darth Vader, and Jones himself,” wrote The Federalist.

Today, BuzzFeed News released video proof of Cruz’s love for the animated TV show. “Hi, I’m Ted. With Harry Shearer retiring, I’m auditioning for any part I can get in The Simpsons.”

Having been part of the show since it debuted in 1989, Shearer announced his retirement from the show in May. The New York Times reported:

It is not looking like an okely-dokely day in the town of Springfield: Harry Shearer, an Emmy Award-winning cast member of “The Simpsons,” who provides the voices of characters like the irritatingly upbeat neighbor Ned Flanders, the billionaire tyrant Mr. Burns and his faithful manservant, Smithers, has indicated that he is parting ways with this long-running Fox animated series.”

I’ve seen Cruz do his Simpson impressions on more than one occasion and they never cease to be chuckle-worthy. We hear the same stump speeches from candidates time and time again, the same talking points, the same policy chats, it’s refreshing to get a glimpse of them as people every once in a while.

That’s pretty funny. It’s good to see a Republican with a sense of humor for a change.

For a change? Most Republicans have a sense of humor!

Cute! Great way to reach the TMZ and LIV crowd.

I wonder how the MSM and Dems (redundant, I know) will try to twist this against him.

Remember him reading Green Eggs and Ham on the Senate floor, and how they used that to ridicule him?

Watch. They will try.

I’m thinking the “release the hounds” is excellent fodder for his opposition’s ads and is going to bite him in the butt.

I LOVE Ted Cruz – but this was the lamest thing I could imagine him doing.

Of course it will be twisted against him by the media. He comes across like a putz in it.

What he did here is so lame, that only a GOP adviser could have come up with it. In trying to cater to a crowd that will never vote for him, he made himself look ridiculous.

This is akin to the GOP trying to win over ‘independents.’

This will come back to haunt him.