But this time it’s not funny. 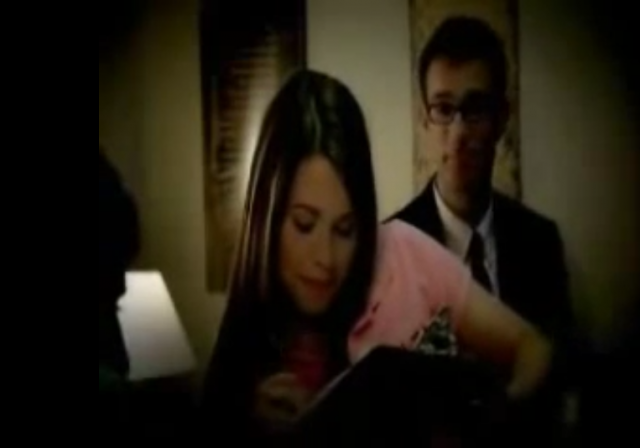 We have been covering the absurdity of the “Yes Means Yes” movement, and the violation of fundamental due process rights under the banner of “rape culture,” for quite some time:

In our coverage, we frequently have posted this parody video from 2007.

The Affirmative Consent Project, which advocates for “yes means yes” sexual consent policies, has been distributing “consent contracts” to college students across the country.

The contract states in big red letters: “YES! We agree to have SEX!” (emphasis original), and asks participants to take a photo together holding the contract. If a camera can’t be found, then the participants would need to fill out the form included on the back of the contract.

The group provided the Washington Examiner with an image of the form, which simply states that on this date (fill-in-the-blank) “We agree to have consensual sex with one another.” The form also provides spaces for two parties to sign and print their names. 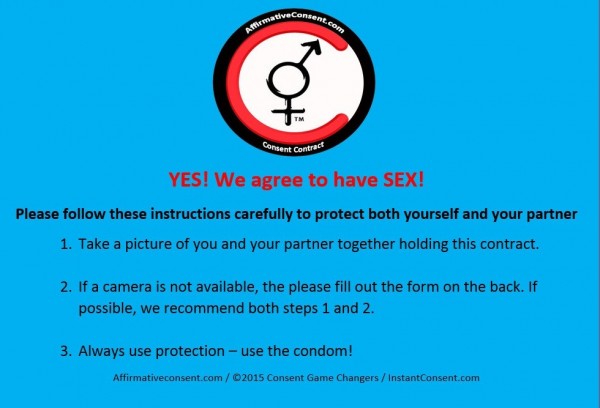 This is no joking matter, unfortunately.

The “Yes Means Yes” movement does not address actual consent, but only the procedural formality of consent. Run afoul of that procedure, and a student may find himself (it’s almost exclusively enforced against men) subject to expulsion, suspension and campus kangaroo courts.

In signing a Yes Means Yes (ironically titled the “Enough is Enough” law), NY Gov. Andrew Cuomo was emphatic that the word “Yes” needed to be uttered, even though the law does not require verbal consent exclusively:

“The other person has to say yes. They have to say yes. It’s yes on both sides,” Cuomo said.

Worse still, the Yes Means Yes procedural standard is working its way into the criminal law.

Ashe Schow at The Washington Examiner asks the pertinent question, Has the federal government ever had sex?

The act of sex is not illegal. But if two members of the American Law Institute have their way, it will be — unless you follow their rules.

Law professors Stephen J. Schulhofer and Erin Murphy are trying to update the criminal code when it comes to sex offenses, believing current definitions of rape and sexual assault are antiquated. The focus of their draft is on what constitutes consent. It adopts the “yes means yes,” or “affirmative consent” model that was passed in California last year….

Schulhofer and Murphy do not intend to make sexual intercourse impossible to construe as an innocent act. But this would be the consequence of their draft. Any act of sex in which permission is not repeatedly requested and granted would put at least one of the parties, usually men, in legal jeopardy. Absent the repeated “May I…?” and affirmative responses, any woman could later have her partner locked up over unexpressed mental reservations. Men could make the same accusations.

No one who opposes this legal change argues that consent is unnecessary. But the “yes means yes” standard is so stringent that it would criminalize millions of Americans overnight unless no one reports them.

Think about the power that puts in the hands of prosecutors, and divorce lawyers. Normal human consensual sexual behavior will be subject to the arbitrary and often capricious powers of the state. 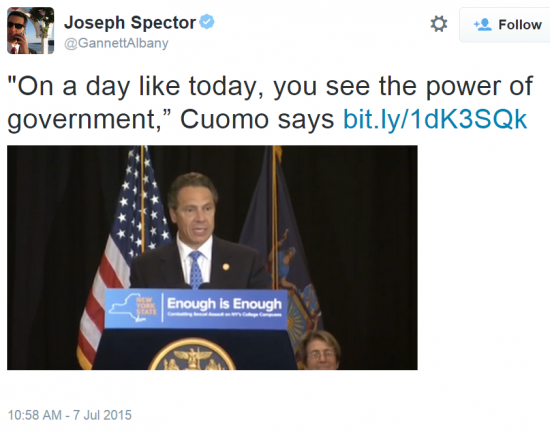 Life is imitating parody. But this time it’s not funny.

They told me if I voted for Romney, there would be puritanical scolds looking over American’s shoulders and telling us how, when, and under what circumstances adults could have sex.

So Mittens is advising these fools? I knew it!

Hmmm. So it’s official … college women are Helpless Snowflakes who can’t function without the protection of The Powers of the Patriarchy.

Have the Feminists heard about this?

Back in the day, I sought out helpless little snowflakes. Good times, good times.

I wonder how many of these feminists are dick hating dykes.

That’s a requirement to be in the sistah-hood.

Uhm……100 percent….
The more snowflakes they can scare the more there are for them.

The main stream meat market ….er…. media is gonna choke on this one.

Will there be a notary involved?

He forced me to: (check one)

This is insane on so many levels. A partial timeline:

which finally led to…..

– college hook-up culture (sex without any commitment, just an “animal-instinct” “physical need” so why not? …as some claimed)
– high school (even middle school) sex is normal, even encouraged in some circles
– “Queer Eye for a Straight Guy” and other shows with homosexuality on-screen (in almost the same stereotypical ways that were anathema in the 1970’s-1980’s)
– living together instead of marriage, or just having babies without any consideration of marriage is the norm (again, even encouraged in some circles)

Now the “hook-up” culture has “evolved” to require CONTRACTS to “hook-up”?! That having sex is now “rape” when it was just last week/month/year a normal thing to have sex whenever, wherever, with whomever you choose?! Dizzying, this pseudo-logic….. O.o

Maybe these “progressives” might want to acknowledge that such contracts are similar to what many used to think of as………marriage. Full circle, perhaps?

(May I add: the Progressives were the “Dry” folks (often called Christians, although that is debatable) who pushed through Prohibition……which backfired in their Utopian, Fabian-socialist fat faces. Also, I can link to ref’s for all this, if needed.)

Unable to win control of the entire American society, hyper-liberal campus higher-ups have seceded their respective campuses from that society, accepting smaller numbers of serfs, essentially, to get total control. How ironic that 100% of the money that keeps universities open is derived from capitalist profits. Socialism can only be funded by taxing capitalists, whether middle class blue collar workers or mega corporations. This is more of a dig at the capitalists who tolerate it.

I think it is wonderful that now a young man, when thinking “boys will be boys” will have informed consent regarding “girls will be girls” and does he want to participate in such a screwed society or consider emigrating.

Normal human consensual sexual behavior will be subject to the arbitrary and often capricious powers of the state.

All of which could make voluntary abstinence a popular option.

Maybe the conservative abstinence advocates need to join forces with the progressives in the Yes Means Yes movement.

I think there was a movie from the 70s or 80s that presented a similar utopian vision. The children were scientifically bred in womb banks that were artificially inseminated with sperm deposits.

Well, we’re not there yet, but the direction of progress seems clear.

Mrs. H has gotten a little frisky since my return from a week away. Tonight I remembered this article and stopped her dead in her tracks by asking to see our ‘contract’.

Do only bigoted practitioners of patriarchal sex have to do this, or are nancy-boys included?

Looks like a “Get out of jail free” card to me, boys! Have at it!

They have it in Iran. It’s called temporary marriage.