Affirmative Sexual Consent? There’s an app for that.

Affirmative Sexual Consent? There’s an app for that.

If “no means no,” and “yes means yes,” what does it mean when the app crashes? 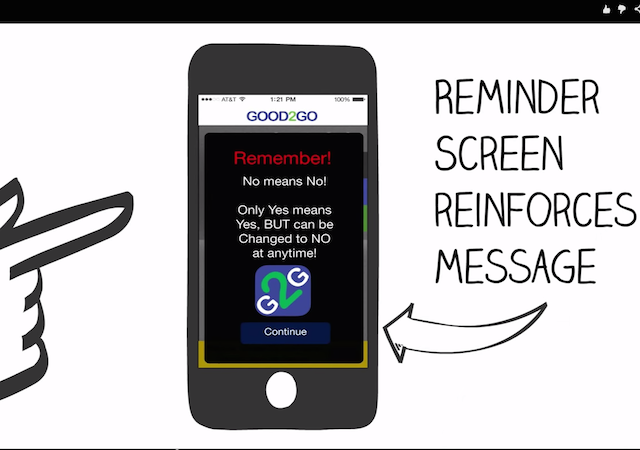 On Monday, we told you about a new California law that essentially outlaws sloppy, reckless sex between college students. Now, a new app has launched that seeks to eliminate all debate over whether or not that hot guy or girl at the bar is “good to go”—home with you.

Via the New York Daily News:

“Good2Go should be treated in the same manner as putting on a condom,” its website explains. “It may stop the action for a second, but everyone understands it is in the interest of safety, so it is worth the momentary pause.”

The free app works as follows: After sparks fly with a potential hookup, one of the people involved launches the free Good2Go app on his or her phone.

When it is opened, the app will display the question, “Are we Good2Go?” The other party then selects “No thanks,” “Yes, but…we need to talk” or “I’m Good2Go.”

If the first option is chosen, a screen pops up that says “Remember! No means No! Only Yes means Yes, BUT can be changed to NO at any time!”

The second choice pauses the app so the pair can have their discussion.

According to Slate, app developer Lee Ann Allman was inspired to create this weirdness after she spoke to college students across the country about the problem of sexual assault on college campuses:

They “are very aware of what’s happening, and they’re worried about it, but they’re confused about what to do. They don’t know how they should be approaching somebody they’re interested in,” she told me. Meanwhile, “kids are so used to having technology that helps them with issues in their lives” that Allman believes the app will help facilitate necessary conversations, encourage them to consider their level of intoxication, and remind young people that consent to sex should be affirmatively given and can be revoked at any time.

(Before we dive any further into this mess, we need to address this idea that somehow a sex app is going to help sexually active young adults have more responsible sex by forcing them to push buttons before they engage in all the sex they’re already having. I’m only 29, but I remember a time when sex wasn’t rocket science. Did they change it? What are we confused about here?)

The problems with relying on an app to prevent potential assaults are legion, but the biggest problem that nobody seems to want to talk about is the fact that this app logs the name and phone number of everyone you engage in this weird online sex interview.

According to its small print, Good2Go logs personally identifiable information, including names and phone numbers, on all its users. When two people use the app to hook up, it records both users’ phone numbers, as well as the time and one partner’s sobriety. (Because Good2Go requires you to register with a name and phone number, that number is also tied to your name.) Per its privacy policy, Good2Go can share that information with law enforcement, “third-party service providers” and e-mail marketers — or anyone else, really, “for any reason, in Good2Go’s sole discretion.”

This doesn’t just mean that your data is potentially vulnerable to hackers, should they go after the service. (Good2Go stores its users’ information on Amazon Web Services, which are considered secure — but have been hacked before.) It also means the logs could transfer to another company if Good2Go is sold, be subpoenaed in a lawsuit or criminal case, or sold off to someone else entirely.

“To be clear, it is not our policy to disclose these records to just anyone,” Lee Ann Allman, the president of Good2Go and its parent company, Sandton Technologies, told the Post. “Good2Go/Sandton Technologies would need to be presented with an official, legal request via law enforcement or a specific university before we would disclose these records.”

Not only is this data potentially embarrassing (and I assure you, if you need an app to have the sex talk with Joe Hardbody from the pub, you should be extremely embarrassed), it’s also unreliable.

As is the case with many sexual assault cases, there’s no way to absolutely prove what two people who have engaged in sexual conduct were thinking when the contact took place.

Having this data floating around in the cloud is bad not only for the accused, but for victims as well. There are strict rules governing what evidence is and is not admissible in a court of law, but what about in university-run kangaroo courts? Or in the court of public opinion?

Maybe it’s time for modern society to put down its double vodka tonic and face the facts: if you need an app to tell you if it’s a good idea to have sex with someone, the answer is probably “no.”

What does it mean when the ap crashes…?

But, seriously, how dystopian is this state of affairs (see what I did there?)?

Young men and women are told they are supposed to have sex like little packs of roving mink, except they are NOT, and a retroactive withdrawal of consent months later becomes “rape” in a kangaroo campus court.

And, of course, young men are the de facto vicious animals in each and every little melodrama. (Hey, is there any reason why older men, not on a campus, could not be drawn into this net?)

The Bible app has been around for a long time. Its free and it works if applied. Its called Wisdom.

People don’t like their moral philosophy accompanied by an overbearing God… or something. Despite the fact that the greatest violations of human rights have been committed by overbearing mortal gods.

This app provides no assurance whatsoever. As consent can supposedly be canceled at any moment, having both parties record “good2go” at one point is not evidence of the lack of later withdrawal.

“…the lack of later withdrawal.”

See how fraught with peril this whole thing is?

How does the app hold up when one or both parties are intoxicated? Seems to me that wouldn’t help with the new CA law.

Works great! Load the app and put the phone between your knees.

Or, you could just keep your pants zipped until marriage – solves all kinds of problems….

Ah, but does the law exempt married couples from its tentacles?

“Good2Go/Sandton Technologies would need to be presented with an official, legal request via law enforcement or a specific university before we would ”
Or until hacked. I’ll give it 6 months before the hackers target it.

And I thought my smartphone screen was smudgy looking.