The Chinese Stock Market Is In Big Trouble

The Chinese Stock Market Is In Big Trouble 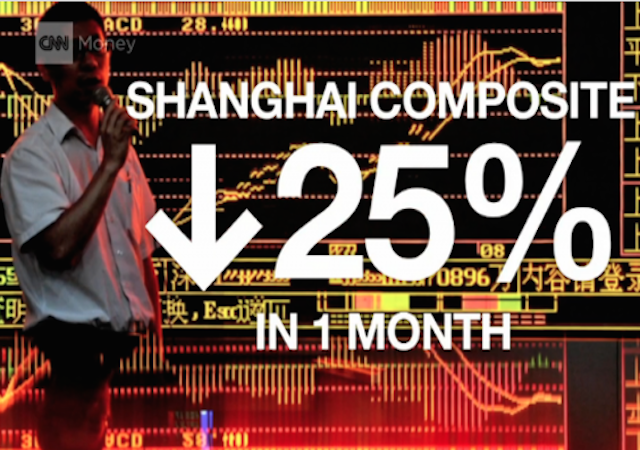 Things are bad in both of China’s big exchanges; both the Shanghai and Shenzen are seeing companies halting their trading on both:

Over 700 Chinese companies have halted trading to “self preserve,” according to the state media. That means about a quarter of the companies listed on China’s two big exchanges — the Shanghai and Shenzhen — are no longer trading.

China’s stock markets are in trouble. The Shanghai Composite Index has fallen over 25% since mid-June. The Shenzhen, which has more tech companies and is often compared to America’s Nasdaq Index, is down even more.

Government intervention has not helped:

Chinese stocks fell on Tuesday, taking little comfort from a slew of support measures unleashed by Beijing in recent days, and unnerved by Chinese Premier Li Keqiang’s failure to mention the market chaos in a statement on the economy.

Before the market opened, Li said in comments posted on a government website that China had the confidence and ability to deal with challenges faced by its economy, but had nothing to say on the three-week plunge that has knocked around 30 percent off Chinese shares since mid-June.

Morgan Stanley Asia Chairman Stephen Roach said some of China’s problems can be traced back to issues related to the debt-to-GDP ratio:

China is also trying to address its debt-to-gross-domestic-product ratio, which some estimates peg at more than 225 percent, Roach said.

“[But] they don’t have a full array of capital markets to support the economy, like places like the United States,” he continued. “So they have to rely on much more debt financing to grow this investment-led economy. They went too far, especially in the property area.”

It’s not hard to see how the property bubble and this stock bubble are related. From last April here on LI:

China’s property bubble has already started to burst as the country struggles to avoid a hard-landing after the housing market became overheated with soaring prices.

China’s commercial and residential property sectors are not doing well, especially in the city of Hangzho, which has “become the symbol of a market in distress”, according to Forbes.

The world’s largest retailer, Wal-Mart, is closing its Zhaohui store in Hangzhou on April 23 as a part of its overall plan to dump unprofitable locations. The sale of the large store comes as the city has too much supply of commercial properties, according to Forbes.

Hangzhou’s Grade A office buildings at the end of 2013 had an average occupancy rate of 30%, according to real estate broker Jones Lang LaSalle.

A month ago, investors were saying China was in “bubble territory” and were bearish on their stocks:

Morgan Stanley just did an in-depth survey to see how major investors currently feel about Chinese equities. They were not optimistic.

Brian Kelleher, Morgan Stanley China analyst, and his team find that, on average, respondents expect the MSCI China Index to rise a mere 1.4 percent over the next 12 months on a weighted average basis. That’s the smallest gain since Morgan Stanley began conducting its survey in March 2013.

Despite that, Roach remains relatively bullish on China:

Still, Roach said the Chinese economy will stabilize around 6.5 percent to 7 percent growth. “It’s not going to go to zero as some of the China bears” have predicted, he said.

Ironically, it was China’s government stimulus for infrastructure (sound familiar?) that helped to create the issue:

China is rife with overinvestment in physical capital, infrastructure, and property. To a visitor, this is evident in sleek but empty airports and bullet trains (which will reduce the need for the 45 planned airports), highways to nowhere, thousands of colossal new central and provincial government buildings, ghost towns, and brand-new aluminum smelters kept closed to prevent global prices from plunging.

We’ll see what shakes out, but when 700 companies decide to halt trading on your exchanges, it is not a good sign.

Communist China has been faking a “good economy” for like 7 years or so – building empty cities of skyscrapers, etc….

Good reading on this at Mish.

Central banks globally have blown the biggest bubble ever in the wake of the 2008 crash. We have only just begun to see the carnage that is coming.

That carnage started in China and it’s going to spread.

How fast?
Where Next?

The two pertinent questions now are “How fast?” and “Where next?”

Does anyone else see an opportunity to for the U.S. to “bail out” some of China’s economy in return for substantial national debt forgiveness? I’m not talking about gouging them with an unfair exchange, but this could be an opportunity to get more than just the interest paid down.

How much of the U.S. national debt does China hold now?

“How much of the U.S. national debt does China hold now?”

Perhaps the real question should be, what is the debt worth?

We send them paper ($) and they send us goods.

Our government owes paper, but Americans hold much of that debt. And China understands the game, and doesn’t like us inflating our way out, but that also damages the American saver. Building the welfare state on debt and inflated currency is a fool’s game, which we will apparently play to the bitter end.

We’ve had enough of their crap … I mean, we’ve bought so much “crap” from China, we are deep in debt. And we are the world leader on so many fronts, but protectionism was made a bad word, so we gave our economy away, in exchange for the colorful beads of high finance.

But other countries didn’t adopt the Bush Doctrine of spreading capitalist democracy. They produced but didn’t buy, didn’t build their own broad economy. They built silly ghost cities, or military, or invested in our markets, and turned their real currencies into a floating fiat nothing, like US.

Only real stuff that benefits broad society builds an economy. America founded that essence, but failed to spread it globally, and instead floated our currency, letting government choose which boats to float. Others failed to trade fairly, and now Obama also only wants to redistribute earned wealth to those that don’t earn it, to destroy the capitalist miracle. So he “TRANSFORMS” America into a welfare state, where one doesn’t have to work to take what others earn.

As we die, the world dies. Because we were the capitalist engine. But what did the commies win? They win the collapse of all that embrace socialism/communism. If Obama completes his goal of destroying capitalist Christian America, he will leave only a dark void. He has never built so much as a Kool-Aid stand, but he is great at tearing things down.

China was bad, but then they played the funny money game and became worse.

Anyway .. my late night effort after a Flynn loss … the corrupt don’t want freedom to reign, and the fat and sassy only care about American Idol, or the latest thing. will America wake up, or take another blue pill, and slide into oblivion?

Central planning fails – unexpectedly! – for the umpteenth time in a row. It has a perfect record.

If our market corrected by one third the amount China’s had, the financial news outlets would be crying “Armageddon!!”