So why did Elizabeth Warren insist we be more like China? 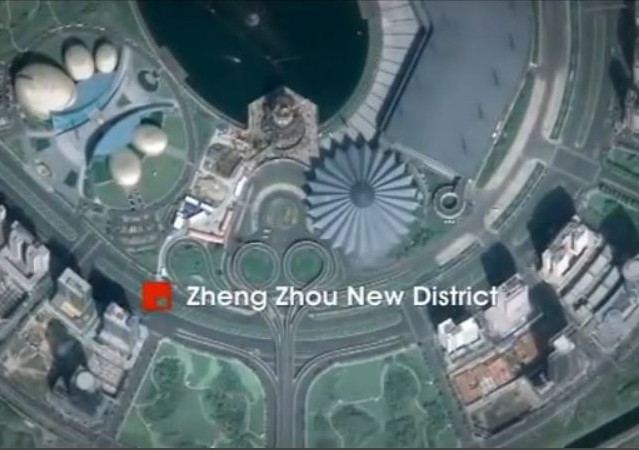 China’s property bubble has already started to burst as the country struggles to avoid a hard-landing after the housing market became overheated with soaring prices.

China’s commercial and residential property sectors are not doing well, especially in the city of Hangzho, which has “become the symbol of a market in distress”, according to Forbes.

The world’s largest retailer, Wal-Mart, is closing its Zhaohui store in Hangzhou on April 23 as a part of its overall plan to dump unprofitable locations. The sale of the large store comes as the city has too much supply of commercial properties, according to Forbes.

Hangzhou’s Grade A office buildings at the end of 2013 had an average occupancy rate of 30%, according to real estate broker Jones Lang LaSalle.

In Hangzhou’s residential sector, occupancy is weak and prices are declining due to massive overbuilding.

All of this was predicted here, back in 2012 when Elizabeth Warren insisted that we needed to be more like China. And I said, Elizabeth Warren apparently never heard of the Chinese bubble and Stimulus:

Warren has just demonstrated how clueless she is and how she is unable to look beyond government-spending talking points.

China started from a much lower point of development, so it has to spend more on infrastructure just to catch up.

China’s massive spending on infrastructure, intertwined with real estate construction, also has created a bubble of cities without people and bullet trains with no riders:

China is rife with overinvestment in physical capital, infrastructure, and property. To a visitor, this is evident in sleek but empty airports and bullet trains (which will reduce the need for the 45 planned airports), highways to nowhere, thousands of colossal new central and provincial government buildings, ghost towns, and brand-new aluminum smelters kept closed to prevent global prices from plunging.

Will any lessons be learned by progressives?  From China’s bubble, or how our own was fed by government policies?

When it blows look for riots cuz the natives are fully expecting that their upwardly mobile, hi-fashion, hi-tech, city-centered lifestyle will continue. The good times seem to be rolling, and lots of folks have become fat, wealthy, and gold-laden where before some didn’t even have silver! When the bubble blows, heads will roll. I hope to be back in my home state before that happens.

FOR THOSE NEW TO CHINA’S MANY LARGE “GHOST CITIES” (of which the Professor’s article pic is just one):

China’s Communist dictatorship government has been building massive ghost cities for the last 7 or 8 years now (to keep the “workers” of their “worker’s paradise” under control).

Check out the many pictures on the Interent of their many massive and still unused Chinese Ghost Cities. One good article with many good pictures is linked to below.

They have also normalized prostitution (i.e. flesh peddling) in order to compensate for the predictable consequences of their ill-conceived population control protocol based on abortion/murder of millions of Chinese, particularly girls.

Incidentally, this is why the Left, in part, favors large scale redistributive change. In addition to their predisposition to monopoly formation for purposes of marginalizing competing interests, in order to maintain their leverage they need to control or appease a democratic demographic. Unfortunately, their high density population centers are structural unsound, and must be sustained through financing and subsidy, which their 1%, elite, and rich are unwilling to exclusively fund with their own wealth. That’s why they delayed implementation of Obamacare until they reached a national office. To both preserve the structural inequalities, and to compensate for their effects, they not only need to secure the private capital of Americans, but they need to buffer the effects of Bubble Economics through sovereign debt creation.

But, but, but… she’s so brilliant! She’s a Harvard professor! She wrote books! How can she be wrong?!?!?! How can government not be the answer?!?!?!

“So why did Elizabeth Warren insist we be more like China?”

Because the only thing RED about Warren is her politics!

Oh yeah and because Warren is a complete dip-stick!

FYi: State Department Cannot Account for Billions of Contracts; It Can Account for $400,000 for Camel Statue in Pakistan
Read more at http://globaleconomicanalysis.blogspot.com/2014/04/state-department-cannot-account-for.html#3kpGKU6v1wddv2lh.99

Perhaps she likes China because it is a tyrannical oligarchy that kills its children and sells poor quality goods from old-fashioned, polluting factories.

China is centrally planned, with minimal market forces to push back on stupid decisions.

That said, the current stir is regarding third tier property areas. Not to say that the contagion cannot and will not spread … but if you are buying property in Beijing, Shanghai, Tianjin or in smaller cities which have had announcements of gov’t agencies moving there such as Baoding, there is currently no cloud on the horizon.

“We have bridges and roads in need of repair”.

One last thing. To the extent electric cars and hybrids become more popular, and large tractor trailer fleets continue to convert over to natural gas, the tax receipts the federal government collects from gasoline and diesel will decline even more in coming years. I’m in the camp that users of federal government services need to pay for them. If the politicians don’t have the political will to raise user taxes to finance current spending on roads and bridges, then sell the federal roads and bridges to private investors who WILL collect the tolls needed to maintain the infrastructure. The upside is they’ll be properly incented to manage the roads and bridges efficiently, and in the long run the cost to users will likely be lower than if the government manages them.

Thank you for sharing your considerable intelligence with us. I learn a lot just being here. And that’s really something since I’m a cranky old [email protected] who already knows darn near everything. 🙂

Yeah, the people on this site will be gung ho for an increase in the gas tax.

Pawlenty vetoed a bill that would have done maintenance on the I-35. Then he happily took federal emergency dollars to build a new bridge in ‘record’ time and play the hero. There were reports that the bridge was rotten. I guess the people who died in that fiasco didn’t have a ‘right to life’. It would have take tax dollars to keep them alive.

Christy stopped the ARC tunnel that would have taken the train tracks under the Hudson from 2 to 4. It is estimated that it would have cut 25 minutes off the average commute, each way, for NJ citizens. It would have provided a backup in an emergency. The ARC was already under construction. But he could avoid raising the extremely low gasoline taxes in NJ by scarfing up the money for road projects. He could keep his claim that he didn’t raise taxes.

His excuse was that there would be cost overruns. That plays well on a site like this. But there were up to date estimates of the costs, based on spending to date, that disputed his claim. Couldn’t Christy have appointed good managers instead of cancelling it?

Daniels took an upfront payment to lease the Indiana Turnpike. That is a tax on future generations. Is it a tax increase when the lease holder raises the tolls?

Isn’t there any middle ground between China’s wild spending and our parsimonious spending? We are eating our seed corn.

The Blog and the Wok

Speaking with a local building contractor, I asked him what he thought of Jacobson’s arrows aimed at Warren and his shrieking property bubble warnings. He thought carefully and he motioned to his only child, the only child so far in this shiny, clean, amazing “New Town 724.”

The boy was riding his bicycle, vainly searching for other children to play with, a comforting reminder of how autocratic planning, often eschewed in short-term obsessed America, has given the Chinese exquisitely quiet new towns and cities, without the deafening cacophony of unplanned children in unplanned towns so common in my own country.

As we watched the boy give up and abandon his bicycle, the only bicycle in this gleaming new salute to the wonders of East Asian New Urbanism, the proud builder began to answer my question as he urinated in the well-kept shrubbery of the adjacent pristine, and as yet unoccupied house.

Smiling, he said, “雅各布森無法看到鐵鍋使用舊的，種族主義，排外主義，民主，腐臭，渾濁的食用油大米,” a sly dig at the blogger, meaning, “Jacobson is the cook who can’t see the wok for the rice through the cloudy, racist, xenophobic, democratic old cooking oil flaming up into his face.”

I left China and its silent, modern new suburbs where happy residents enjoyed the leisure of taking metaphorical jabs at Western bloggers and returned to an America that seemed intent on using the same old arterial clogging recipes for infrastructure and residential planning.

Just think – Fried Man could have been part of the solution. Instead he opts to hide behind the firewall and toss rocks in high arcs in the general direction of those who are actually working on problems.

The actual worst of it is the well over a trillion dollars in “non-performing loans” on the books of Chinese private banks and other lenders. That means, “ain’t being paid,” for those in Rio Linda. Depending on whose figures you believe, it could be between $1.2 and $1.6 trillion.

For perspective, our own 2008 meltdown was solved with the first installment of TARP, $380 billion, which included “loans” to most healthy banks which they were forced to take to avert runs on those who actually needed them, PLUS enough left over to fund the initial auto bailout, which Bush did on Obama’s request.

(Yes, the second installment of TARP was entirely unnecessary and entirely wasted by Obama).

So the Chinese are looking at a problem 3-4 times the size of our own crisis, in an economy without the diversified resilience. Yes, there will be pain. And we will feel it too.