Carly Fiorina is not impressed with your talking points 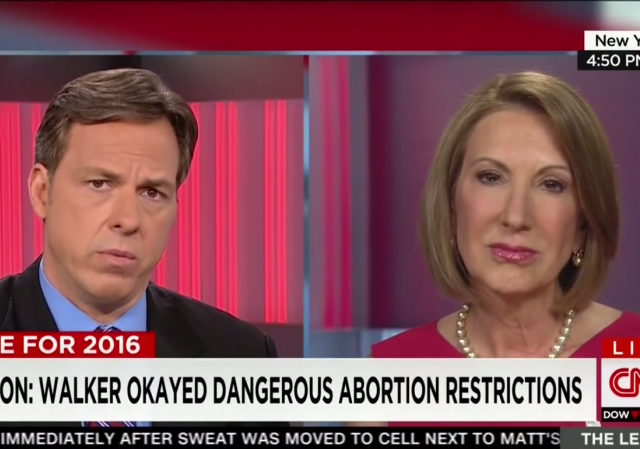 Tapper asked Fiorina to define her position on Governor Walker’s recent bill that prohibits abortions after twenty weeks and makes no exclusions for instances of rape and incest.

Rather than taking the let’s connect Fiorina to what the left believes is an extremist pro-life position bait, Fiorina directed attention to a bill bouncing around the Senate floor, “let’s talk about the legislation that’s sitting on the Senate floor right now which does allow for those exceptions,” she responded.

Tapper interrupted, attempting yet again to pin Fiorina to Walker’s bill. Fiorina would have no part of it and kept talking.

“I would really be delighted if for once, the media would ask Hillary Clinton about the extremism of her position.”

It seems fair to me. If the media is allowed to have their talking points, we should have the same luxury. Fiorina exemplifies the art of gracefully bucking a predetermined narrative while simultaneously making her own points.

The fallacy of Tapper’s (and liberals’) logic is obvious except to those who pat themselves on the back with their elitist hands.

Logic: It doesn’t take 20 wks to figure out if one wants an abortion because they were raped or pregnant because of incest. So deciding AFTER 20 wks becomes an entirely different issue and argument.

Why some of the “nicest” Democrats I know are the product of incest.

…and some of the nastiest too……

Half the ancestry of most Democrats in office involves hoofed quadrupeds.

If you allow the media to control the conversation, all you’ll get is soundbites for the opposition.

Always bring your own cameraman and shoot the whole interview.

Norma McCorvey, Jane Roe of Roe v Wade, said she was raped, Texas abortion law did not make an exception for rape, and ultimately Blackmun et al took abortion law out of the hands of “the people” and instead invented a right not mentioned in the Constitution. Later, McCorvey admitted that she had lied about the rape.

It is impossible to argue the pro-life position, once life has begun all protections are indeed the right of the life, and then argue that life created by an unlawful act becomes not life and not protected.

Fiorina did the smart thing. More impressive every day.

Natoli’s right “More impressive every day”.
I hope she rocks the debates.

Fiorina continues to impress me.

I do like her. The more I hear from her, the more impressed I am. She stays focused and turns the table. And she didn’t jump on the Trump bashing wagon acknowledging the anger he’s tapped into.

Good stuff from Carly on fern policy. With fern-ners.

Well, Fiorina is right. Still, it would be interesting to finally reconcile the rights of the mother and child. It’s more than just a philosophical issue and pro-choice doctrine only evades its resolution.

So far, Walker and Fiorina have hit dialog homeruns on values that matter to folks like me. I care about Midwestern family values: the dignity of every human life, the moral character of our nation and the economic stewardship of the money I earn, to name a few important scoreboard highlights.

Neither candidate should get involved in the identity politics side shows. A candidate going off on any one of these tangents of the absurd soon loses their footing and then easily slips into the media quicksand that sucks them down under.

FYI: I walked around Chicago’s Millennium Park during my lunch hour today. On the west side of the park along Michigan Avenue and directly across from Planned Parenthood’s Michigan Avenue address there was a large pro-life group loudly protesting with “Stop Abortion Now” signs.

Hope is renewed when we act.

It is scientific fact, and, more so, self-evident knowledge, that a human life evolves from conception. It is not the product of spontaneous conception or delivered by the mythical “baby stork” per the pro-choice religious doctrine. Abortion is indiscriminate killing. Neither the mother nor the abortionist know if they are ending the life of Barack, Michelle, Bobby, or Mary. It is the termination of a [wholly innocent] human life for causes other than self-defense and capital crimes. The only other explanation is that pro-choice cultists are at war with humanity.

Weeks ago I made a decision via a comment to an LI article to support a Walker / Fiorina GOP ticket. Nothing has changed my mind since then. We need plain spoken, truth telling Republicans on the ticket in 2016. Lets stop listening to the standard Pol trying to reach every voter with an individual answer to every man and women in the US. Life philosophy matters. Good people make good decisions for the majority of hard working Americans.

Walker/Fiorina works for me – they’re both Washington outsiders – except on the objective consideration that because California is so Democrat that Fiorina isn’t likely to deliver her ‘home’ state (nor would any other CA VP candidate given CA voted more than 60% Democrat in both 2008 and 2012). Walker/Rubio puts Florida in play, while Walker/Perry or Cruz brings Texas in (although Texas is likely in without a Texan on the ticket). Walker is from Wisconsin, a mid-sized state with 42 delegates, so he’ll need a big state VP and has spoken highly of Rubio of late.

BTW, Fiorina was born in Texas, but it would be a stretch for her to present as a ‘Texas’ candidate after running for Senator in California in 2010. Alas, she was born in Austin…..

yeah if Rubio could really deliver Florida that would be pretty big, and maybe a few more percent of Hispanics. But Fiorina might be a big offset in every state, against Hillary “I Am Woman”. Fiorina has strong accomplishments and beat cancer, while Hillary is the corrupt wife of a pedophile island misogynist, and she drinks a lot.

I have no idea how to calculate all that, but it could mean a lot. And Fiorina is immune to the misogynist card, which would be played constantly against two white male Republicans. Carly is already showing she can bring it against Hillary like no one else really has.

It’s interesting that she will not even talk with Russia. They have been more than patient and reserved in the face of Obama’s Spring in Libya, Egypt, Syria, Ukraine, Afghanistan, Iraq, Yemen, etc. In fact, the Europeans are still coping with the fallout from regime assassination in Libya, and Russians, Jews, and Christians are coping with the threat of violence, and burying their dead, following the American-backed coup in Ukraine.

As for the last audience member, are Republicans pro-choice? Do they support and advocate for indiscriminate killing of wholly innocent human lives (i.e. abortion)? Do they support and advocate for the State-establishment of selective exclusion (i.e. “=”, #LoveWins)? Do they support expanding the role of Planned Parenthood et al beyond abortion and sales to carry out State-sponsored killing of unwanted, inconvenient, and infirm human lives after birth? Then why preserve the lives of murderers, rapists, and retarded (i.e. slow, curbed, or blocked development) individuals?

The Democrats do on principle, a pro-choice religion doctrine, but do Republicans? Surely an enlightened civilization can conceive of better choices that will avoid creating moral hazards (selective exclusion), conserve the exceptional value of human life (intrinsic value), and respect individual dignity (not class diversity).

Tapper used to be pretty good. Now that he’s got his own show he’s turned into Katy Couric/Matt Lauer. Maybe he had to agree to be a lib/dem to get that show.

How can ONE woman have more balls than 15 GOP men? Combined!

Actually Trump has balls too. They are both not professional politicians. That means they want to earn peoples vote. The others are, which means they are trying not to lose votes of people tjeu don’t want to offend.

You Trump cultists are hysterical.

I figure anyone who gets the Establishment Republicans, Democrats, and the news media a fit has to have something going for him. (or “her”, like “Sarah Palin”)

I like that everyone is going to use it now, but give credit to the originator.

Sigh another Carlygasm. What’s with the support for a woman who was an abject failure in business?

Carly can’t even get this right. Sure there is hypocrisy in Hillary’s position. What’s new?

“it’s not the one committing the rape or incest? Then why are you punishing it.”

So you want a Republican that will run on all women that get abortions being charged with murder? Carly put the issue in the winning perspective, on the extreme position of Hillary.

Even those wanting ALL abortion illegal should recognize any presidential candidate pushing that agenda just had their campaign poisoned. I assume that is not your intent. But I don’t doubt their are “commie” infiltrators posing as Christian around the internet that demand such campaign ending positions.

their there, for the last “their”

She supports a ban on abortions after 20 weeks. No exceptions are needed.

Let me explain my “no exceptions” logic: a woman who conceives a child nearly always finds out for sure that she’s pregnant at 8-12 weeks (at this point she’s “missed” two menstrual cycles). If the child is the product of rape or incest, that gives her at least eight weeks to “decide” if she wants to keep it or destroy it. That’s two months in which to make her “choice”.

Additionally, medical advances can keep a baby born at 22 weeks alive and growing into a healthy child. I believe it won’t be too much longer until 20 weeks is considered viable.

So, tell me again why we need exceptions for rape and incest to allow abortions after 20 weeks.

I’m curious curious about the whole rape and incest exception to abortion. If you are in favor of abortions in the case of rape and incest, then you are pro-abortion. You just happen to draw the line further to the right than some of your fellow travellers.

I am opposed to abortion because abortion murders humans who are innocent of any wrong-doing. I cannot imagine the anguish a woman would go through when presented with a child fathered by a man who raped her. She would have to be exceptionally brave not to give the child up for adoption immediately. But to murder an innocent for the sins of the father? How does one morally justify that?