Carly Fiorina at her absolute best

Carly Fiorina at her absolute best

Taking on gotcha questions, turning them around, and mastering the facts 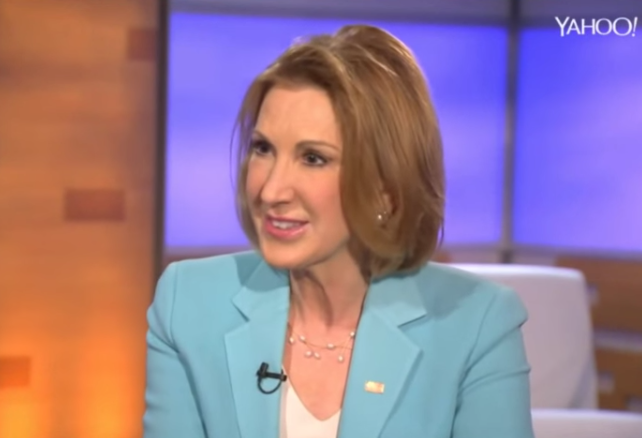 We are fans of Carly Fiorina. She should be on the stage at the debates, though it’s not clear she will be.

Fiorina has shown an ability to take on hostile questioners with a smile, as she slices and dices liberal talking points.

That’s why we have featured videos of her appearances several times. And it’s why we were so disappointed in her Buzzfeed video.

In this video, via Steven Crowder, Fiorina is at the top of her game. The interview is from late May, but it’s a prime example of why Fiorina should be on the national stage:

“The scientists that tell us that climate change is real and caused by man made activity, also tell us that a single nation acting alone can make no difference at all.

So, when I see a state like California destroy lives and livelihoods with environmental regulations that will make no difference at all to climate change, when I see the Obama administration take that same regulation and apply it nationally – it will make not difference at all, yet we’re destroying people’s lives and livelihoods – I wonder, why are we doing this? Why are we doing this when it won’t have any impact?

So I think the answer to this problem is innovation, not regulation.

But I must say, it angers me when liberals says “I’m prepared for you to lose your job in the name of sending a signal to…” whom? China could care less? In fact, China is delighted that we are not spending any time or energy figuring out clean coal, because they’re going to go do it.”

From the same interview, Carly takes on Hillary’s experience and trustworthiness:

The full interview is here.

My goodness, when Fiorina is on target, there are few better than she is.

the answer to this problem is innovation, not regulation

Good answer to questions on issues that are characterized as risk management.

She’s spanking them just as hard as Newt ever did, and with much more style than ol’ Newt ever had. And she’s a she! The progs can’t trash her without descending ever further into their self-made mire of hypocrisy.

On mine too. I gotta convince my wife to watch these clips.

I think she’s a very good VP pick for ANY candidate.

Has Fox considered the optics of excluding Fiorina, Carson, Jindal, Cruz and/or Rubio from the debates?

In fact, China is delighted that we are not spending any time or energy figuring out clean coal, because they’re going to go do it.

She’s out of her mind. China isn’t interested in clean coal.

China might be interested in developing and selling clean coal technology – besting the US and other Western nations in that potential market.

Good stuff! It was like Carly Fiorina was being interviewed by some Lefty kid on the student newspaper, and Carly gently explained to her why she is wrong. If she’s not in the debates something’s very broken in the debate system.

She was expressing these same things during the campaign to oust Barbara Boxer in 2010. Yet everyone called her a flash in the pan and a flake. If the conservative media had given her the same look then, as she is getting now, she would have beaten the panties off of Boxer. Then we would not have been hearing a Senator dissing a military officer in a witch hunt hearing.

The fact that she lost to Boxer says less about either candidate than it does about the voters of California.

Thanks for posting these videos. They prompted me to poke around a bit looking for more Fiorina speeches and I found this one: https://www.youtube.com/watch?v=NONDQlxGMSE
which is of a presentation and Q&A at the Western Conservative Institute. I really like what I’ve found on her thus far. The way she talks about issues makes it seem like her decisions are an integral part of an underlying understanding of conservative principles and beliefs, not just the usual bag full of stances on this and that.

It would be great to hear her on Mark Levin’s show. I think they could have a good conversation.

I watched the whole interview and that was the most refreshing thing I’very seen in a long time. She didn’t flinch and owned every stupid question Katie had prepared for her. She deserves a place in the debates and I would have no problem with someone like her in the Whitehouse. How delicious would it be to watch her go up against Hillary in a presidential debate?

A debate between Carly Fiorina and Hillary Clinton would be a study in contrasts. Fiorina’s confident and straightforward answers versus Clinton’s “aah” peppered and insecure drone..

“Make coal cleaner” … we did it, we just aren’t scrubbing life giving CO2. Carly doesn’t address the real issue, the fraud over CO2 and the actual “climate change” definition. Instead of “China will do it”, maybe “China and India burn coal like crazy for their 2.5 billion, and don’t bother with scrubbing anything. They must laugh that we kneecap our industry with these insane EPA restrictions, while we already burn cleaner than anyone.”

But maybe evading the “are you a true believer in Rev. Gore’s Climate Change” is the best way to tackle it. I don’t know the polling on how bamboozled people are by the “climate change” mantra. Maybe just keep bringing up that the left damages us with taxes and reg’s that accomplish nothing, and coal miners are ready to go back to work.

If she wants to go the “innovation route”, she could go nuclear, and preempt the safety questions by mentioning Yucca Mountain built for $3B then blockaded by Democrats. “We have the safest nuclear in the world, but even Japan’s safety mistakes in an earthquake and tsunami zone did not turn into anything close to Russia’s Chernobyl. America is exceptional.”

It seems ridiculous to use polls to determine debate eligibility this far out. In late 2011, the double-digit leader with 27% was Herman Cain, who was out early.

If they are honest about it, one of the ten podiums will be reserved for Margin of Error.

Fabulous. Anyone who smacks down the sniveling, pretentious, leftist doormat Katie Couric gets my vote.

The ambush tactic worked well with Sarah Palin, so the state controlled media has been doing it every since. Newt showed the way that the ambush tactic could be blunted and the current crop of Repub candidates are using it to their advantage. What will be the next tactic? Only time will tell.

Climate change, oddly, might be one of the defining issues of the Republican primaries. We’ve already seen others hem on the issue, agreeing with climate change, but disagreeing on the cause. Florina is reading the polls intelligently. Most Americans are responsive to idea of scientific consensus. Rather than try to assail or limit the idea consensus, as her competitors do, she is attempting to own it to support her policy position. It is pretty crafty politics.

There is a danger in this approach. If she buddies up with scientific consensus to much, she’s inviting climate change supporters in criticize her policy position. Right now I would say that this approach is in beta. Accepting climate change but supporting coal is a bit like refusing to quit smoking because of second hand smoke; you’ll find few doctors to support you on that position.

In any event, it will be interesting where this goes. I’ve long wondered when Republicans would begin to engage on a policy front on climate. So far, it looks like Fiorina may be one of few.