Surprise! It’s the Gipper, not Obama!

During my family’s visit of Berlin, Germany yesterday, an American president was prominently featured as part of the tour we took.

Our guide spoke glowingly of a speech that he heard, and one which still resonates with him to this day.

As we passed the Bradenburg Gate, he quoted Ronald Reagan’s 1987 speech by saying, “Mr. Gorbachev, tear down this wall!”

Our guide lived 3 blocks away from the infamous Berlin Wall, the remnants of which are covered in art and graffiti or which are boxed up as souvenirs of a seemingly distant era. While the entire speech is iconic, reviewing Reagan’s words again, I was struck by this passage:

In the Reichstag a few moments ago, I saw a display commemorating this 40th anniversary of the Marshall plan. I was struck by the sign on a burnt-out, gutted structure that was being rebuilt. I understand that Berliners of my own generation can remember seeing signs like it dotted throughout the Western sectors of the city. The sign read simply: “The Marshall plan is helping here to strengthen the free world.” A strong, free world in the West, that dream became real. Japan rose from ruin to become an economic giant. Italy, France, Belgium–virtually every nation in Western Europe saw political and economic rebirth; the European Community was founded.

The Marshall Plan’s 68th anniversary is here, and I noticed there is still a lot of current construction and growth in Berlin, as well as in Copenhagen, Denmark (the first city on our tour). It seems both Truman’s and Reagan’s efforts to ensure the freedom and prosperity of Europe are still appreciated, as this was the scene at a Danish café on July, 4th: 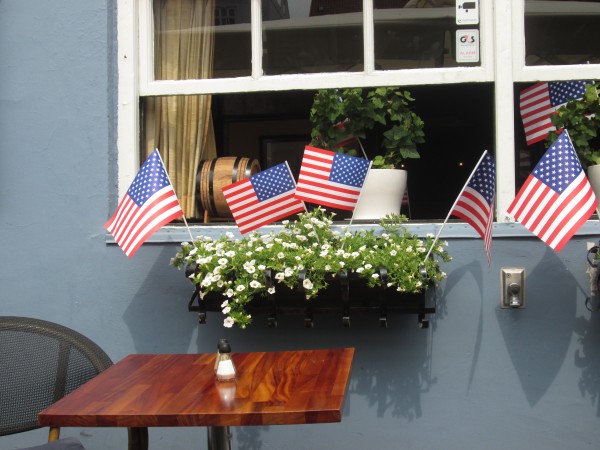 During the 7 hours of the Berlin tour, not one mention of Obama’s 2008 speech at the Brandenburg Gate was made. Those remarks are disturbing when they are compared with both Reagan’s speech and current events. A sample:

Peace with justice means pursuing the security of a world without nuclear weapons — no matter how distant that dream may be.

Given the likely Iran deal, that dream is even more distant today! Then, there was this gem:

With a global middle class consuming more energy every day, this must now be an effort of all nations, not just some. For the grim alternative affects all nations — more severe storms, more famine and floods, new waves of refugees, coastlines that vanish, oceans that rise. This is the future we must avert. This is the global threat of our time.

Obama’s delusions about the relative threat of climate change compared to that of organized Islamic terrorists are one of the few consistent aspects of his administration.

Is it any wonder why “global citizens” recall Reagan’s words nearly 30 years after they were made, yet Obama’s rhetoric has ended up on the cutting floor of history?

Of all the sites we saw yesterday, the most packed was “Checkpoint Charlie”, the best known crossing between East Berlin and its western counterpart. No matter their nations of origin, every visitor celebrated the end of a chilling era of tyranny that was once visible in the form of the Berlin Wall. Truly, it was a special moment to share this story of freedom with my son.

I am grateful for having a tour guide who offered the history of this from a pro-American perspective! 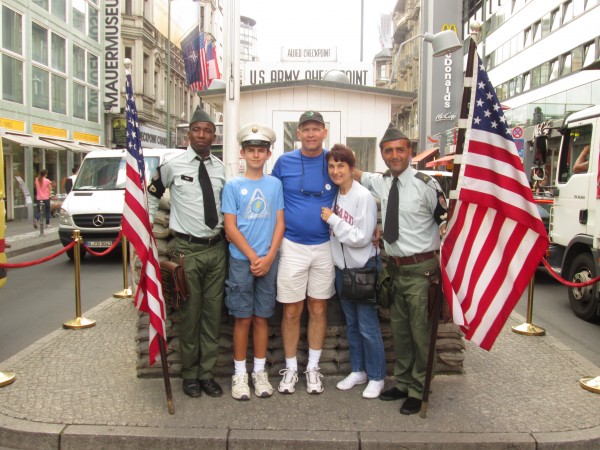 Counter that with little barry’s “Mr. Khamenei, build this bomb!”

Or better yet, “Mr. Sanchez, tear down this wall!”

King Barry and his handlers are still peeved at the mere thought of the Berlin Wall coming down. They wanted this monument to the grand idea of Communism to still be standing and used. As a symbol of oppression, Obozo would love to have this wall standing in this country.

Flag this post for re-running every time the news looks depressing. Well, no, that would mean it would stay up 24/7. Okay, just a few times a year will do.