The War on Police Claims More Victims in Baltimore

The War on Police Claims More Victims in Baltimore

Who suffers most when the police are the villains? 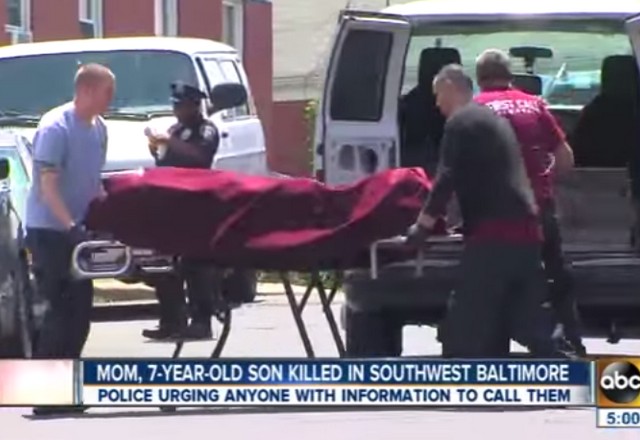 Baltimore has been out of the national conversation for a couple of weeks. Freddie Gray is dead. Six police officer have now been indicted in his death. Last weekend, Memorial Day weekend, Baltimore was one of several cities that saw a spike in violence. At that point Baltimore had 35 homicides for the month of May, making it the deadliest month in the city since 1999.

But the killings didn’t stop. Late last week a 31 year old woman and her seven year old son were shot in the head in southwest Baltimore. Little information has been reported. Police have not released any speculation about the motive behind the slayings.

With three more murders Sunday, the murder count in Baltimore stands at 43, the highest toll in 40 years.

What’s going on in Baltimore (and elsewhere as we saw last weekend) is part of what Heather MacDonald calls A New Nationwide Crime Wave (Google link). After seeing crime drop for nearly two decades, crime is rising. The reason isn’t complicated. With politicians claiming that the main problem in law enforcement is policing, a theme echoed by many in the media, and police realizing that they can be prosecuted and vilified for doing their jobs; arrests are down and crime is up.

This incessant drumbeat against the police has resulted in what St. Louis police chief Sam Dotson last November called the “Ferguson effect.” Cops are disengaging from discretionary enforcement activity and the “criminal element is feeling empowered,” Mr. Dotson reported. Arrests in St. Louis city and county by that point had dropped a third since the shooting of Michael Brown in August. Not surprisingly, homicides in the city surged 47% by early November and robberies in the county were up 82%.

Similar “Ferguson effects” are happening across the country as officers scale back on proactive policing under the onslaught of anti-cop rhetoric. Arrests in Baltimore were down 56% in May compared with 2014.

“Any cop who uses his gun now has to worry about being indicted and losing his job and family,” a New York City officer tells me. “Everything has the potential to be recorded. A lot of cops feel that the climate for the next couple of years is going to be nonstop protests.”

According to The Baltimore Sun’s online database, 36 of the 43 homicide victims over the past 30 days in Baltimore are black. Does this matter to those who vilify the police saying #BlackLivesMatter?

Now, if only there was a leader with guts to stand up and point out that those 36 of the 43 murdered Baltimorians were black, and to publicly ask Marilyn Mosby if black lives matter so little that she can prosper by playing the demagogue against her local police force.

Insufficiently Sensitive – not a political leader but a Ravens player, Lardarius Webb, tweeted this. https://twitter.com/LWebb21/status/605207872885166081

Doesn’t he work for Fox News?

I saw the video. She was rather put off by that line of questioning. Her Majesty simply doesn’t get questioned like this by local reporters.

My money is on a new record this month.

“Everything has the potential to be recorded.”

I’m afraid they’re just going to have to get used to that one. One need not be a rioter wannabee or a professional race-baiter to see some virtue to routine—and even pervasive—video of police activity.

I’m afraid the public is just going to have to get used to the new crime wave. Unfortunately policing involves the use of force, which is often necessary but usually not very photogenic. When police are vilified or even prosecuted for doing their job, they stop doing their job.

The hard core criminals only understand force. Anything less is viewed as weakness to be exploited. Cops know this, criminals know this, but much of the public does not. However, the public just might be receiving lesson #1 as murder rate will continue to rise until force stops it. Crimes are often prevented and solved by making life uncomfortable for bad guys. Remove the context of the street and see the photo/video and be deceived citizens.

Only the parts of the public that haven’t watched COPS before.

I’ve heard a lot of captured fugitives from justice watched America’s Most Wanted religiously. COPS is popular among the criminal element too.

Appearances matter less here than what state attorneys will put before a grand jury.

Does someone out there doubt that chaos is an intended result of obama’s actions?

Obama IS a professional Community [Dis]organizer.

36 of the 43 deaths are known to be black, the rest are listed as unknown. Most of those will also be found to black. It would not be outlandish to suggest that all 43 deaths last month are blacks.
So yes the black community needs to stand up and say there is a problem here. They need to stand up and demand their friends and neighbors give a damn.

Happening in the Peoples Utopia of Portlandia too. According to the local news “teens” or “young men” have been involved in somewhere around 64 incidents so far this year with almost half of those in the month of May.

If I was a cop I would be a lot more interested in making sure that every Prius in all the affluent neighborhoods used their turn signals properly than I would be in even getting close to a situation where I might have to use force on one of our politically protected citizens.

Sigh. You just described the situation in Atlanta. In the Northeast quadrant of the city, there is a huge police presence – devoted to speed traps and gotcha tickets, such as the one my coworker received for only stopping once at a stop sign (technically you are supposed to stop three times, so only stopping once ‘counts’ as a roll as the cop explained to her).

Meanwhile, murders in Atlanta this year are up by 50% — but you won’t see that covered by the local media, which is in cahoots with the elites, black and white, who don’t want it discussed because it’s bad for business. Silence equals death indeed.

Criminals… and other “wicked problems”.

Correction: Murderers… and other “wicked problems”. It seems that Democrats are a one-wicked solution Party. Hopefully, others will demonstrate a greater capacity for [positive] change, [positive] progress, etc.

People forget the NYPD cops who were ambushed and murdered in cold blood, Joe Piagintini and Waverly Jones, Rocco Laurie and Gregory Foster [nobody served time], the entire climate of the city making war on cops and not on criminals. So the cops decided their job was to take statements after the bodies were already lying in the street and call it a day. I don’t blame them. It took Crown Heights and a small sliver of some people who never voted for a Republican in their lives to put Giuliani and Bratton in control and that changed everything. Now, decades later, the past is forgotten, and it was more important to elect someone who honeymooned in Havanna and Sandinista Nicaragua and who swore to make cops the target. Ditto Detroit. Ditto Baltimore. Ditto Chicago. All 100% self inflicted.

Wait til tourism declines as a result.

Baltimore has a cruise port, which I had actually considered at some point. Not anymore, no cruises or visits to the inner harbor either.

This is what people get when they force the police to stop enforcing laws. Forget about the ordinary citizen doing anything about the situation. The commies have seen to that, by instituting stringent gun control laws. Now they will reap what they have sown, when the mobs start killing city officials other than the police. Then it will be too late.

There is another aspect to the protests and ambushes of police. There are fewer effective police units on the street. If they must patrol in pairs for safety, that means half the units are present. When they call for backup because a crowd is harassing them, that is even fewer units.

We do have a problem with police relations and over aggressive policing. Freddy Gray may even have been one of those cases. He died of a broken neck while in police custody. We have bemoaned the excessive use of SWAT and armored vehicles, of dog shooting, and harassment of citizens. There is a serious need for reforms in police training, tactics, and attitude. But there is no way this will happen while the cops are under physical attack and threat of political reprisal.