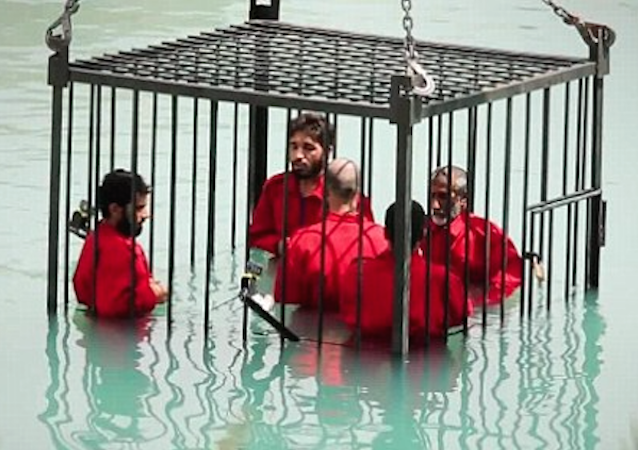 Since last year, Obama Administration officials have been internally debating whether or not to continue with their existing policy banning the payment of ransom to terrorists in exchange for hostages. In the United States, the law specifically bans the aiding of a terror organization; however, debate over the diplomatic effects of this policy rose to the forefront last year, when ISIS terrorists demanded ransom in exchange for the life of a 25 year-old American woman.

The US policy of denying ransom—either paid by the government, or private parties—caused tension in the international community. Switzerland, Spain, and France, among others, all permit negotiations with terror organizations, with all of Europe contributing at least $125 million to Al Qaeda and its affiliates in the last 5 years.

Last month, the Administration signaled that it was ready for a shift in policy by discussing the possibility of creating a “Hostage Czar,” who would be responsible for guiding families through the ransom payment process; and now, the White House is ready to announce an official change in policy that would allow families to pay ransoms to terror organizations without fear of prosecution.

In the past, the Administration explicitly forbade ransom payments and threatened prosecution for non-compliance; but according to Fox News, the move comes as families of Americans held hostage continue to put pressure on the Administration over the reportedly-debunked policy:

Four Americans have been killed by the Islamic State since last summer: journalists James Foley and Steven Sotloff and aid workers Peter Kassig and Kayla Mueller. After the release of gruesome videos showing the beheadings of some hostages, Obama approved an airstrike campaign against the Islamic State in both Iraq and Syria.

In recent months, two other American hostages have been killed while in custody: journalist Luke Somers, who died in a failed U.S. rescue attempt in Yemen, and Warren Weinstein, who was accidently killed by a U.S. drone strike in Pakistan.

Weinstein’s family has been particularly outspoken about its frustration with the Obama administration. In a statement Wednesday, his wife, Elaine Weinstein, said she hoped the hostage review “was conducted fully and frankly so the U.S. government can have an honest conversation about the areas where it falls short.”

“Our benchmark for this review’s success will be the actions arising from it more than its specific findings,” she said.

According to sources close to the review, the black letter law on the books won’t change, and policy will still forbid ransom payments flowing from the government.

We saw this coming; and now, here we are. Back in August, analysts worried that increased international and social pressure would lead to a weakening of the US position regarding negotiations with terrorists; now, the American people are being put into a position of support, even if not fiscally, for a policy that we have rejected out of habit and abhorred out of a sense of moral obligation.

Don’t expect the administration to back down. ISIS militants recently released a new video showcasing new levels of brutality used against enemies and hostages:

Filmed in the ISIS stronghold of Mosul, the sickening seven minute long video uses expensive underwater cameras to film the terrified men as they sink below the surface with no hope of escape.

Shortly afterwards the cage is lifted back out of the water, with the dying men – who are understood to have been accused of spying – seen foaming at the mouth as they lie motionless on the floor of the cage, piled on top of one another.

Elsewhere in the video, ISIS militants are filmed brutally killing prisoners by locking them in a car and shooting them with a grenade launcher, while another group of jihadis chain a set of prisoners together with explosive necklaces which are then detonated.
…
The full seven minute video actually begins by showing a group of men wearing orange jumpsuits being led into a desert clearing, before being locked in an Opel saloon car.

Moments later a masked ISIS jihadi appears carrying a huge grenade launcher, which he uses to fire a missile into the vehicle, causing it to burst into flames and burn the badly injured victims to death.

The film then cuts to interviews with another set of prisoners, where they ‘confess’ to the crimes they have been accused of and discuss how they have been treated by the Islamic State.

The group has also released evidence of a booming and terrifying sex slavery scheme, targeting Yazidi and Christian women in Syria.

The War on Terror, now fueled by fear, weakness, and the promise of capitulation.

“…a policy that we have rejected out of habit and abhorred out of a sense of moral obligation.”

Seriously…?!?! Did you SERIOUSLY write that and publish it?

The policy isn’t one of habit, or even morality. It IS a policy of hard-headed economic reality.

You’re surprised by this? Why?

What an easy way to “launder” millions and millions of U.S. taxpayer dollars to terrorist, enemy organizations attacking the western world………

Awesome. Let them bring their wheelbarrows or wait for the trillion dollar promissory notes to be printed. I wonder if they will accept a trillion dollar transfer payment.

This country has NEVER given in ransom demands. Of course, Barack Hussein al-Chicagi has never proven he has anything but disdain for the United States.

How about a hostage exchange? I can think of at least two people to exchange for a piece of lint.

The Marine Corps Hymn’s opening line is based upon our first experience with ransom demands. “… to the shores of Tripoli” they deployed to deal with the Barbary Pirates – musslemen, as Adams and Jefferson called them, after their pagan religion.

Jefferson announced our policy on their demands, which had been the American standard until the quisling Obama: “Millions for defense, but not one penny for tribute.”

One of the triggers of the War of 1812 was the kidnapping and conscription of American sailors by the Royal Navy.

Treason is what it is. Against America, and against humanity itself.

Sure, let’s encourage the ‘religion of peace’ to kidnap people so we can pay them to buy more destructive weapons and enable them to kidnap even more people.

Great national strategy if you’re hellbent on taking the country down the tubes.

Obama is going to be the death of this country.

Will obama be negotiating with the conserative white males that the NY times considers to be primary source of us terrorism?

Maybe limbaugh will kidnap josh earnest and obama will ransom him back with million dollar bills with ms obamas pic on them.

this should have been a silent change in policy.
also should never have been an issue for family to pay if desired.
treat them the way we treat ship owners who get hijacked. ransom paid and ship and crew given back.
the US should also NOT be involved in the negotiations.
thats what is going to cause the issues.

One might think someone wants things to get very nasty.

Do we even know how much we paid for Bergdahl?