Are you ready for another Czar? 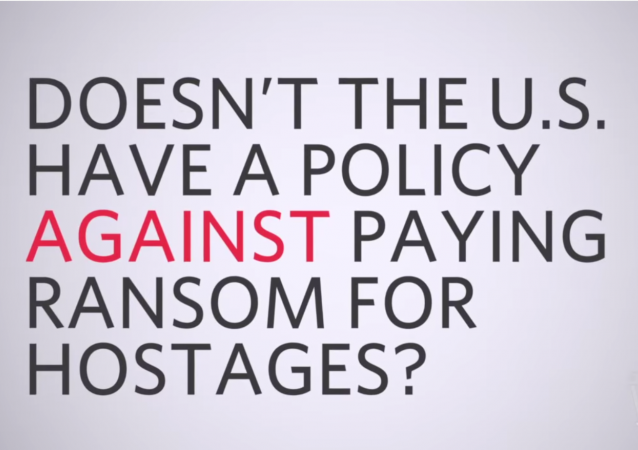 While the official U.S. policy has long been that we don’t pay ransom to terrorists who kidnap American citizens, the Obama administration is working to find a way around this long-standing and eminently sensible stance.

The idea is to allow the family of hostages held by terrorists to pay ransoms to terrorists and avoid prosecution for aiding terrorist organizations.

Families of American hostages who communicate with foreign kidnappers or raise money and pay ransoms will no longer have to fear prosecution for aiding terrorist groups, a White House-ordered advisory group on U.S. hostage policy is expected to recommend, senior officials told ABC News last week.

“There will be absolutely zero chance of any family member of an American held hostage overseas ever facing jail themselves, or even the threat of prosecution, for trying to free their loved ones,” said one of three senior officials familiar with the hostage policy team’s ongoing review.

It appears that in the matter of the families versus the government, both get their way.  The families, understandably, want to save their family members (though paying ransom is no guarantee), and this government prefers to negotiate with, rather than defeat terrorists.

While the White House appears to be couching the latest development as exercising their option not to prosecute families for providing material aid to terrorists, ABC reports that the White House is likely to set up a Hostage Family Engagement Team:

The likely White House move is in anticipation of findings and recommendations by a hostage policy review team from the U.S. National Counterterrorism Center expected to be delivered to President Obama in the next few weeks.

“In response to what we have heard from family members, we are considering the establishment of a working-level, operationally-focused coordinating Fusion Cell to ensure a whole-of-government response to overseas hostage events,” said the senior official familiar with the review. “We are also considering the establishment of a Family Engagement Team as a permanent part of the Fusion Cell, to ensure that families have full-time and direct access to professionals who can provide timely information and other necessary support during and after a hostage crisis.”

In support of all of this, Rep. John Delaney (D-Md.) has put forward the Warren Weinstein Hostage Rescue Act that establishes a “hostage czar” who will work with families to pay ransoms to terrorist organizations and that establishes a “fusion cell that would provide quarterly reports to Congress and ensure that the families of U.S. hostages receive ‘regular updates that do not compromise U.S. intelligence’.”  According to the report:

A Maryland congressman introduced legislation Friday that would create a “hostage czar,” a high-level position at the National Security Council that would centralize efforts to find and free U.S. hostages.

The bill, called the Warren Weinstein Hostage Rescue Act, is named after an American contractor who was abducted in 2011 and inadvertently killed last month in a CIA drone strike on an al-Qaeda compound in Pakistan.

This muddies the waters considerably because it goes beyond simply not prosecuting families to actual government involvement in negotiating with terrorists.

But don’t worry, according to Josh Earnest, “helping with a ransom payment is not tantamount to paying a ransom.”

Sounds like typical Obama administration Orwellian doublespeak to me.  For example, the FBI, who helped negotiate ransom for Weinstein with al Qaeda didn’t violate U. S. policy because they didn’t “directly” authorize it.

You could laugh, but for the crying…

Didn’t the commies over throw the czar in 1917?

If I ever get taken hostage, I don’t want to have a ransom paid. The ragheads are going to kill me anyway.

What I want is for that area to be bombed so hard it’s made into another Chernobyl.

If I’m going to be caputed, my life is a small price to pay to have an excuse to massacre however many raghead bastards are in my immediate proximity.

This is a strategy that would reduce the number of incidents substantially.

Being 1/16th Turk, I approve of your sentiments.

Hey … whatever happened to that Ebola czar?

He got a bad cough, and I haven’t seen him around in a while.

HELP! I being held captive by Obamacare and its mandates. Will the Hostage Czar please release me from this prison?

The Obama Doctrine is all about immediate gratification. Forget long term consequences, or at least postpone them until he’s out of office.

What ever happened to the maxim that if you’re caught by the enemy, kiss your ass goodbye.

Especially if traveling/working in areas Americans have been warned are too risky for us civilians.

Government facilitating prepayment for murder. What a plan.

Can we set it up online so it’s a one-click, no fuss deal?

The United States government vouched for the credentials of whoever was going to take the ransom money.

Whoever took the money apparently pocketed it. Weinstein was not released.

Pusilanimous bastards! Our current federal government, if it can be called that, is made up of fools and poltroons; unthinking, uncaring mongers with no grasp of history and not an inkling of the way our enemies think! TB has the right idea; pay all ransoma with thermobaric devises and 2000 “smart” bombs. A little shake and bake would eventually convince the mullahs to crawl back into their holes.

Yes, there would be a cost in human lives, lives of civilized people as well as Islamic Supremacists but many less than would result from a policy of paying “tribute” to these new Barbary pirates.

mongrels, not mongers. This app needs an edit feature!

I think there is one offer our government should make to anyone holding an American hostage:

Safe conduct to and from the point where they release their hostages unharmed.

One offer, one time. Failure to accept immediately guarantees a reprisal of at least 100 of their own killed for every American hostage.

Have an alternative idea concerning hostages. Maybe as a nation we could fund a military with full time soldiers. Give some of the soldiers advanced training. When an US citizen gets taken hostage we could send these “special forces” with the equipment necessary to get the hostages out and kill the hostage takers.
I’m too poor to pay. Me, myself and I don’t have a chance in effecting a rescue.
Thanks IslamObama, you succeeded in changing America.

Where stupid is a talent.

I’m guessing this is about Obama’s continued government employment after the presidency.

I could get behind a Hostage Czar, but only if it’s Ted Nugent.

Mom, the Party has promised you opiates. You are armed. Put down the scalpel. You will sacrifice my life now, but within nine months you would be a murderer.

Sacrificial rites is a reverse hostage plan prosecuted by primitive pagan cultures and modern liberal societies. Every year the Party provides trillions of dollars to women and the abortion industry to take hostage and sacrifice human lives at a time when they/we are uniquely vulnerable.

The Abortionist in Chief and Democrats are projecting again, but the privacy veil has been lifted exposing their sadistic cult.