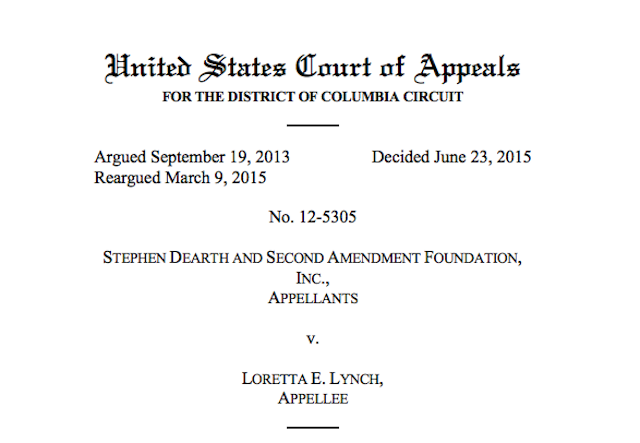 We last saw Attorney Alan Gura just last week, when we covered his oral arguments in front of the 9th Circuit en banc on the matter of “good cause” concealed carry requirements in California (see Full 9th Circuit hears “Good Cause” 2A Ruling and Analysis: Government’s laughable arguments in 9th Circuit 2nd Amendment case, both of which include video of the arguments as well as a rough transcript).

Today, we catch up with Gura again as he enjoys a favorable Second Amendment decision from the United States Court of Appeals for the District of Columbia in the case of Dearth v. Lynch (previously, Dearth v. Holder).  (The full decision is embedded at the bottom of this post)

This case has had a long and tortuous history, as noted today on Twitter by Gura himself: 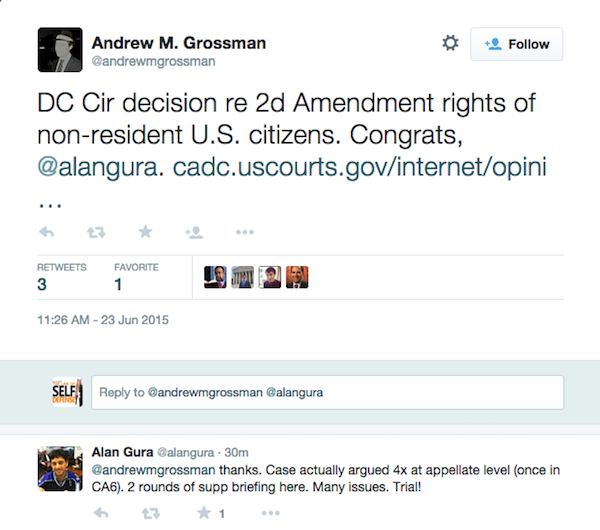 Of course, the case is far from over.  Indeed, what Gura has just won after fighting for this case now for more than six years is merely the right to take the case to trial. (The original complaint was filed March 27, 2009, and is also embedded below; indeed, it more clearly sets out the basic facts than does today’s ruling)

Rather than attempt to recount six years of wrangling through the courts in an effort to simply get to trial, I’ll do my best to summarize the facts and legal arguments as best I can in a brief blog post.

Stephen Dearth, the plaintiff, is an American citizen living in Canada.  He wishes to purchase a handgun in the United States.  He has no existing disqualifications (e.g., felony record, etc.), he owns firearms in Canada, and he possesses a concealed carry permit from the state of Utah.

Nevertheless, Dearth is prohibited from purchasing a firearm in the  United States because the Bureau of Alcohol, Tobacco, Firearms and Explosives (referred to as “ATF”, and in an ideal world a big-box store) has promulgated regulations that limit one’s ability to purchase a handgun to within the state of one’s residence.  If you live in Florida, for example, you can purchase handguns only in the state of Florida.

These constraints are largely enforced through the ATF-mandated system of Federal Firearms Licensees (FFLs), who generally speaking are the only entities permitted to sell firearms on a commercial basis in the US.  When you wish to buy a handgun in your state, you must do so from an FFL doing business in your state.  If there is handgun you wish to buy from a party outside the state, it must first be transferred to an FFL within your state, and you would purchase that handgun from that in-state FFL.

Thus Mr. Dearth’s difficulty becomes apparent, as he does not live in ANY state, but rather lives in Canada.  There are, naturally, no American FFLs in Canada, thus there is no way to lawfully emulate the kind of “across state lines” purchase described in the prior paragraph.

Dearth’s case, then, is an effort to find these ATF/FFL regulations to be unconstitutional.  It is observed by today’s Federal Circuit Court ruling that these transfer restrictions are in fact purely regulatory, and are not required by any Federal statute.

The dissent asserts that Dearth may purchase a firearm in Canada and bring it into the United States so long as the firearm itself is “generally recognized as particularly suitable for or readily adaptable to sporting purposes.” That is incorrect. Although the statutes the dissent cites may allow for such transport, federal regulations bar it. . . .  The dissent sees no problem because regulations cannot trump statutes. But Dearth faces real-life consequences as a result of the way the “regulations are interpreted and enforced in practice,” regardless of whether a court might one day invalidate those regulations. So long as [these regulations] remains in force, any firearms Dearth purchased abroad will be subject to seizure and forfeiture if he attempts to bring them into the United States for self-defense.

(Internal citations and references removed for ease of reading.)

Gura’s attack on these regulations is, per his original complaint, based on the arguments that they violate the Second Amendment rights to keep and bear arms for the purpose of self-defense, and violate 5th Amendment equal protection and due process rights. They are, in effect, an attack on the FFL system itself.

It should be noted that this is not the only avenue of attack by Gura on the FFL system.  Back in February Gura scored a huge when a federal district court in the 5th Circuit ordered summary judgment in favor of several plaintiffs who challenged existing restrictions on handgun transfers across state lines.  The court found that the federal government’s existing handgun transfer ban was unconstitutional both on its face and applied to the facts of this case, under both strict scrutiny and intermediate scrutiny, and on 5th Amendment Due Process grounds.

You can read all about that case here:  Federal Court: Handgun Transfer Ban Unconstitutional.  Indeed, Gura used the victory in Mance as the basis for immediately filing a Notice of Supplemental Authority in Dearth.

At the time we did a video/podcast on the Mance decision over at my home blog at Law of Self Defense:

Interestingly, the stinging loss in Mance so infuriated the ATF that a week later they peremptorily sought to ban one of the most common forms of ammunition, M855/SS109, for one of the most common firearms  in civilian hands, the family of AR-15 rifles knows as the “modern sporting rifle.  This plan was dropped after a firestorm of outrage, with the agency receiving over 80,000 negative responses to the proposed ban within days of their proposal.

We covered that story here:  ATF Backs Down on Ban of Popular Rifle Ammo. (The ATF itself never explicitly linked the hoped-for ammo ban to the 5th Circuit loss, but the timing is highly suggestive, to say the least.)

It is also notable that summary judgment in federal court on Second Amendment cases is something of a habit with Gura. He had also won Peruta on summary judgment before a three-judge panel of the federal 9th Circuit, before ending up at the en banc hearing of the 9th mentioned at the start of this post.)

In any case, that’s where things stand at the moment, with Attorney Gura, after “only” six years of effort, finally cleared to bring Mr. Dearth’s complaint to trial.

As promised, here is today’s decision from the United States Court of Appeals for the District of Columbia:

And here is the March 2009 initial complaint that started it all, six long years ago:

Attorney Andrew Branca and his firm Law of Self Defense have been providing internationally-recognized expertise in American self-defense law for almost 20 years in the form of blogging, books, live seminars & online training (both accredited for CLE), public speaking engagements, and individualized legal consultation.

“ATF”, and in an ideal world a big-box store”

…with a drive-thru window for all your par-tay needs!

It would also need a good website for online purchases.

I’ve no doubt there are American FFL’s residing in Canada, but engaging in such sales would be flagrantly criminal under the Canadian criminal code. In Canada all criminal law is federal, so provincial differences are irrelevant.

I don’t think he has a case, but be that as it may, the idea he can buy a handgun in Canada for personal protection is in and of itself a complete flight of fancy.

One of us is confused. Maybe BOTH, but anywho…

The question is not about Dearth accepting delivery of a handgun in Canada.

The question is about his INABILITY to purchase a handgun (for delivery anywhere) due to his lack of a state residence.

As a citizen, he should have the ability to purchase a firearm from a seller REGARDLESS of where in the world he resides. I think he has an excellent case.

I think it is also important to remember that even if he did purchase a handgun in Canada he would not be allowed to bring it into the U.S. from what I read above.

the idea he can buy a handgun in Canada for personal protection is in and of itself a complete flight of fancy.

This is not correct.

It requires a license, the Restricted Possession and Acquisition Licence.

Canada’s RCMP seems to recognize no right to self-defense. But of course, neither does America’s BATFE, with its “sporting use” nonsense.

“Stephen Dearth, the plaintiff, is an American citizen living in Canada. He wishes to purchase a handgun in the United States. He has no existing disqualifications (e.g., felony record, etc.), he owns firearms in Canada, and he possesses a concealed carry permit from the state of Utah.”

Given he already possesses firearms in CANADA, the Canadian law does not seem to be an issue.

I doubt that he plans on bringing a gun into Canada. This is how I understand his situation:
He lives in Canada, but occasionally enters the U.S. He wants to enter the U.S., buy a gun, carry it while in the U.S. (where permitted), have it in his hotel room (or wherever he hangs his hat when visiting the U.S.), then leave it locked up with a friend when he returns to Canada. He wouldn’t violate Canadian law at all.
The problem is that ATF won’t let him buy a gun anywhere in the U.S., simply because he is not a resident of any state.

Alan Gura will be seen as a giant when history looks back. Hard to believe that other attorney’s have not been able to construct and argue the issue of the 2nd Amendment as well as he has.

“Gura’s attack on these regulations is, per his original complaint, based on the arguments that they violate the Second Amendment rights to keep and bear arms for the purpose of self-defense, and violate 5th Amendment equal protection and due process rights.”

These regulations, and other similar firearms statutes and regulations, are also a violation of citizens’ rights to property, which include all of the rights that attend thereto (right to acquire, possess, lawfully use, enjoy, transfer, sell, or otherwise dispose of lawfully, etc.). Among those rights is the right to carry one’s property, meaning to move it from one place of residence to another, or merely to travel with it in one’s possession. SCOTUS says that we cannot be forced to give up one right in order to exercise another, but Dearth’s situation is clearly one in which he is being forced into just such choices – choose to live in Canada and forgo the right to purchase a handgun in the United States, or forgo the right to live where he pleases in order to live somewhere he can legally obtain a handgun in the United States.

Dearth’s case, then, is an effort to find these ATF/FFL regulations to be unconstitutional. It is observed by today’s Federal Circuit Court ruling that these transfer restrictions are in fact purely regulatory, and are not required by any Federal statute.

The above perfectly illustrates how regulations are de-facto laws, and must be challenged in court in order to stop them — and massive, unceasing volumes of regulations are strangling us……

Wouldn’t it be rather easy for Stephen Dearth to establish residency in one state or another?

I mean supposed he wanted to vote, or get a driver’s license? (he probably couldn’t buy a gun only because he had no state ID)