The IDF is conducting a massive manhunt for three Israeli teens kidnapped Thursday night. The three students Eyal Yifrah, 19, from Elad, Gil-Ad Shaer, 16, from Talmon and Naftali Frenkel, 16, from Nof Ayalon went missing as they were heading home from the Yeshiva where they were studying is Gush Etzion. (Gush Etzion or Etzion Bloc, is an area of Israel that illegally seized by Jordan in Israel’s 1948 War of Independence and recaptured by Israel in 1967.)

According to Avi Issacharoff of the Times of Israel, Israeli forces are focusing on two members of Hamas who live in the Hebron area and disappeared Thursday.

The working assumption by Palestinian intelligence is that Hamas is behind the kidnappings, a suspicion confirmed by Israeli Prime Minister Benjamin Netanyahu Sunday morning.

According to the Palestinian sources, Palestinian intelligence received notice of the kidnapping only 12 hours after the event, and since then has maintained communications with the Israeli side, with active coordination between the two security forces.

Palestinian Authority President Mahmoud Abbas, the sources said, is receiving regular updates on the situation’s latest developments, though they expressed consternation about Israel’s handling of the affair and Netanyahu’s castigating Abbas for signing a unity pact with Hamas.

While it appears that Abbas and the Palestinian Authority are cooperating with Israel in the search for the teens, Prime Minister Benjamin Netanyahu is holding the PA culpable for kidnapping.

“This morning I can say what I was unable to say yesterday before the extensive wave of arrests of Hamas members in Judea and Samaria.
Those who perpetrated the abduction of our youths were members of Hamas – the same Hamas that Abu Mazen made a unity government with; this has severe repercussions.
We are currently focusing all of our efforts on bringing the abductees back home. Before coming here, I spoke again with the families, and I embrace and encourage them from here, from the Cabinet table, and I know that I speak for all parts of the nation.”

While there are those who are absolving the PA for responsibility, an Israeli official told to the New York Times:

An Israeli government official, who spoke on the condition of anonymity because he was not authorized to discuss the issue publicly, defended Mr. Netanyahu’s stance. “Hamas has been directly responsible for countless kidnap attempts and murders of Israelis,” the official said. Now, he said, Mr. Abbas had formed a government on the basis of a signed agreement with Hamas, giving it legitimacy
and allowing it a presence in the West Bank.

“We know that one of the establishing principles of the Palestinian Authority was that it would fight terrorism,” the official added. “That is no longer clear.”

There has been an outpouring of support for the kidnapped students in Israel and around the world. A Twitter campaign with the hashtag #BringBackOurBoys has been launched. Saturday night saw a gathering at the Kotel (Western Wall) in Jerusalem.

(The Hebrew is translated “Our brothers, the house of Israel, who are immersed in trouble and captivity, standing between the sea and the dry land – may the Omnipresent one have mercy upon them and take them out from distress to relief, from darkness to light, and from captivity to freedom, now, speedily and soon.”)

Another gathering is planned for this evening. Jewish communities all over the world are holding vigils and prayers for the three. 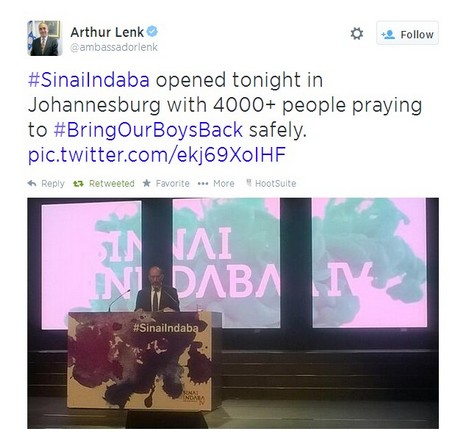 In the United States many synagogues recited Psalms for the safe return of the boys.

Paula R. Stern made a very apt observation in her Times of Israel blog.

But isn’t it interesting that we deal with our anger by holding a mass prayer rally? Isn’t it amazing that we don’t hand out sweets in the street when our enemies suffer?

Which brings us to how the other side has reacted.

Supposedly, the content offered by EI reflects “the commitment of its cofounders and editors to universal principles of human rights, international law, anti-racism and equal justice.” However, the EI does not hide that when it comes to Israel and its Jewish citizens as well as supporters of the Jewish state, these laudable principles are replaced by a truly Orwellian definition of antisemitism that reflects Abunimah’s preposterous view that “Zionism is one of the worst forms of anti-Semitism in existence today” and that support for Zionism “is not atonement for the Holocaust, but its continuation in spirit.”

Given these views, it is hardly surprising that Abunimah sometimes finds it difficult to conceal his enthusiasm for the kind of murderous “resistance” practiced by terrorist groups like Hamas and Islamic Jihad. It is equally unsurprising that Abunimah would now refer to the three recently kidnapped Jewish teenagers as “settlers” and to the security forces searching for them as “occupation gangs” – which, in the context of Abunimah’s ideology, implies that the three yeshiva students were legitimate targets of the “resistance” that Abunimah supports.

Aussie Dave of Israelly Cool has a collection of photographs of Palestinian celebrations of the kidnappings, reminiscent of those following 9/11.

For example of the celebrations there’s this from Khaled Abu Toameh. 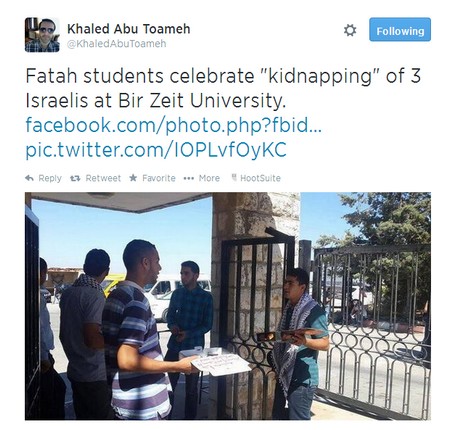 And yes you read correctly, that says “Fatah students.”

Palestinian Media Watch notes that the official Palestinian newspaper Al-Hayat Al-Jadida celebrated the kidnappings too with a cartoon based on the World Cup logo. 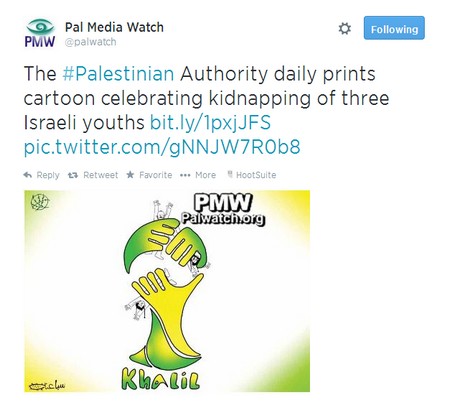 On one side of the conflict there is pain and hope. On the other there is celebration, mocking and hatred.

Has the United States seen enough yet?

“Palestinian” intelligence?
I’m sure they’ll work day and night leaving no hovel unsearched and no stone unthrown until these three are returned to their families.
I’m also sure that they could “find” them in the time it took me to type this.

May God deliver these boys from the hands of their savage enemies.

If should be pointed out that both areas where the boys went to school, Gush Etzion and Hebron, had Jews there BEFORE the state, and more specifically until the Arabs committed Massacres there. That is why they were the first areas the Israeli government allowed Jews to return to.

By the way, I’ve noticed, even out here is the sticks of Haifa, how the Chareidi (non-Zionist) Yeshiva world has treated these boys from Religious Zionist Yeshivas as their own, and reacted to the kidnapping as something happening to their family.

On the side, I have a first cousin and Nof Ayalon, and lots of relatives in the Gush, which has a large percentage of Americans.

Thanks very much for letting me know about the Chareidi response. In America, as far as I can tell more Yeshivish/Chareidi Shuls have been every bit as involved in promoting praying for their safe return.

Thank you; I didn’t know if I portrayed it correctly. I first found out because I heard to guy talking on the street Friday night, and it sounded like trouble within the community. This is how it is being treated. The local Chareidi Yeshiva was already saying Psalms Friday night. I do not, of course, mean that other sectors of society are taking it any less personally.

I’m not going to deny that there is a Chareidi/secular divide in Israel. But Chareidim are often portrayed as not caring about the non-Chareidi sector of society. Your experience shows otherwise. Thirty years ago, when I was in Yeshiva I spent several Shabatot in Haifa with cousins. They lived in Neve Shaanan.

Please let us draw a line under the idea of a “2 state solution”. The second Palestinian state already exists, it is called Jordan. There is no moral, geopolitical or legal reason to create another Arab country. The only impetus to do so to date has been the bullying of the Arab and Islamic countries. A society that openly calls for, facilitate, finances and celebrates the kidnapping of Jewish teenagers does not deserve the respect of the international community as a “partner for peace”.
I hope Americans are not naive enough to image that these are unsolvable conflicts in far away countries that the US should just leave alone. Although it is true that the first target of Iran will be Israel, the second one will be for the United States. Why? These are not “ancient hatreds”. The Jews are ancient and American is a relatively young country. Both countries have individual freedom at their core and it is the mere existence of such freedom is intolerable to totalitarian philosophies.

The PA is two-faced; Fatah activists asked merchants to destroy CCTV tapes. And Israeli Leftists started trouble in a town near Hebron, diverting the army from the search – possibly intentionally. “I only set up your enemies from amongst yourselves”.

BTW, one of the boys is American.

BTW, Mrs. Abbas is now in a private hospital – in Tel-Aviv.