In at #9: Lindsey Graham

In at #9: Lindsey Graham 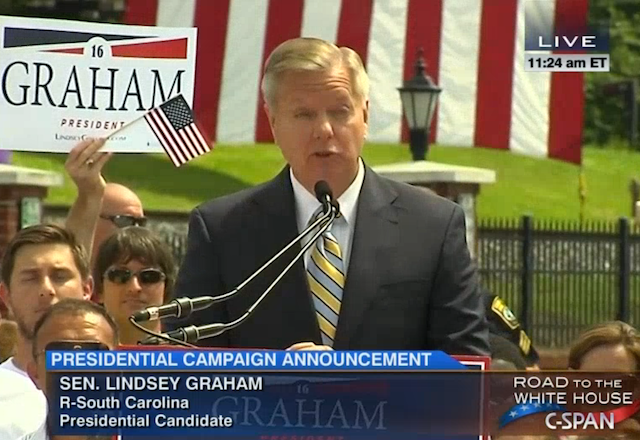 Today, Lindsey Graham stood up before an enthusiastic crowd in Central, South Carolina, and announced his bid for President of the United States, making him the ninth Republican to jump in the race. He focused mainly on highlighting his foreign policy and national security chops, taking swipes at Obama’s disastrous foreign policy and Hillary Clinton’s tenure as Secretary of State.

“I’m running for president of the United States,” Graham said. “I want to be president to defeat the enemies that are trying to kill us — not just penalize them or criticize them or contain them, but defeat them.”

Graham said he has more experience on national security than any candidate in the race.

He quipped, “That includes you, Hillary.”

You can watch the announcement here, via C-SPAN.

Graham seemed to be having fun as he jabbed at Clinton, saying, “[w]e will have a reset with Russia that sticks.” The jokes were there, but Graham really did deliver in his first official stump speech as a candidate, elevating himself in the foreign policy debate that is likely to shape the 2016 primary season.

Both Marco Rubio and almost-candidate Rick Perry have taken similar approaches to their campaigns, not shying away from the oft-overwhelming task of defining their approach to international politics. Graham came out full hawk, his words contrasting sharply with those of Rand Paul, whose dovish statements on American intervention overseas have rocketed that campaign into the spotlight in recent days.

Graham’s pivot to domestic policy played well with the crowd, but is almost guaranteed to provide clickbait for those opposed to a President Graham. He advocated for the buy-in that comes along with entitlement programs, saying “[a]s President, i’ll gladly work to save a program that once saved my family.” He did, however, temper those statements with promises to work for smaller government and cut unnecessary spending while protecting important safety net programs.

Is this campaign going anywhere? I have no idea. I’m not of a mind to underestimate Lindsey Graham; but with his preliminary polling numbers still in the single digits, it’s clear that he has a long way to go in convincing Republican primary voters that his tenure in the Senate has prepared him to serve as a foil to Obama and his disastrous legacy.

With as many as 10 more candidates currently weighing a bid, we have nothing but time to decide whether we’re willing to listen.

Is he serious or is he trying to rekindle his bromance with John McCain by having another shared experience?

Likely, he is trolling for a cabinet appointment.

If only South Carolina had a similar law to Florida that would require him to relinquish his Senate seat to run for President, then there would actually be good news about this announcement.

No state has any such law. Florida and Kentucky won’t allow a candidate to be on the ballot for both offices at the same time, but Graham was reelected in 2014.

Sen. Lindsey Graham has been a thorn in this administration’s side because he is knowledgeable, he does his homework, and he challenges them.

And yet, somehow, there is this huge wash of people posting at allegedly conservative sites, saying how much they hate him, at every turn. How can that be?

Lindsay Graham is not a conservative. If you do not understand that – then neither are you. Graham talks a good game sometimes but his Senate votes tell the story. Start with the “Gang of Eight” and walk back to his votes on POTUS nominations. He needs to go during the primary in his next run for Senate.

About the only time I thought he was right was when he was hammering Clinton during the impeachment hearings – and then they failed to actually finish the job.

Lindsay, duh, Graham has, duh been a thorn in the side of the duh, Republican, duh Party. He’s about as, duh, loyal to the right as, duh, John McCain.

This rino clown is a backstabber on the same scale as Michelle Obama is on ugly. He’s merely a rino shill, looking to detract from Cruz, Walker and Paul. And in the process, trying to add “Presidential, duh, candidate” to his resume.

Graham went apostate on some hot-button issues, notably the “Gang of 14” that preserved the filibuster against judicial nominees (until Reid killed it for lower courts), and immigration. The fact that he’s carried a 90-92 ACU lifetime rating for his entire career means nothing to the Purity Police.

I’d like to see the early debates done in an NCAA bracket format. Assign a seed based on the Real Clear Politics average of polling data, give all the pairings the same set of questions on policy and why they should be elected and let them at it without a moderator.

The NCAA bracket only has 64 slots.

Lindsey has hardly been much of a thorn. He, like McLame, is merely Soetoro-lite.

Just two groupings: Those that have had serious executive experience (governor or CEO) and those that have not. That way I only have to watch the first.

U.S. senators and U.S. representatives fall in to the later category – those who do not have experience – unless congressional aids count! Snark!

This is getting ridiculous. Can all of these guys really be thinking, “just wait until *I* get in the race! I’m the one everyone’s been waiting for!”

Out of the nine announced candidates, I bet Graham finishes in the bottom three, along with Ben Carson and George Pataki.

All these candidates suggest the perception among campaign professionals is that the GOP nomination is wide-slam-open, that there is no presumptive leading candidate. If so, it’s definitely a comment on GOP elite pick Jeb Bush’s stumbling-before-it’s-begun campaign.

This time they are scared of Dr. Carson and Firoina (sp?).

Huckabee has no chance and whouldn’t even win Arknasas. Graham has no chance either. What do these two have in common? They are Big Government Establishment Republicans, just like Jeb.

Whenever I see Lindsey Graham I am reminded of poem by Ogden Nash:

God in his wisdom made the fly
And then forgot to tell us why.

Ms. Lindsey is the last DIABLO to be lecturing people about weakness.

Graham should go sit on a Palmetto.

How about on a cracker?

Graham is the Alvin Greene of this election cycle.