Does this reveal more about his temperament than his ideology? 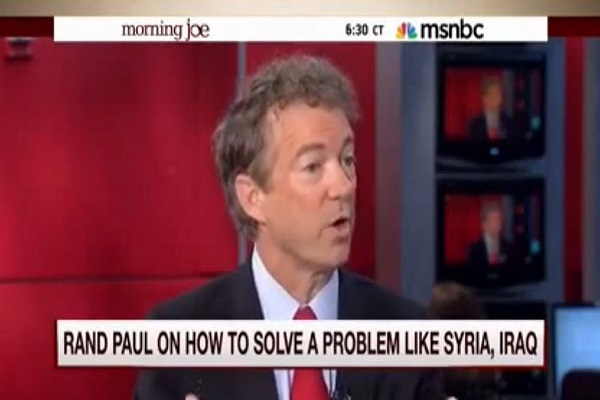 I like a lot of what Rand Paul has to say; I’m on board with limited Constitutional government, auditing the Fed, thoughtful deregulation, and major tax reform.  When it comes to foreign policy and America’s place in the world, however, I can’t think of another Republican with whom I disagree more.  (Except maybe his father.)

And I’m not alone.  Rand has been trying to affirm his strength on national security precisely because there are a lot GOP primary voters who do not share his isolationist leanings.  As Kemberlee noted in September of last year, Rand’s “I’m neither an isolationist nor an interventionist” may not have appeal . . .  to either side.

His rhetoric has changed rather dramatically from last fall, however.  Now he’s going so far as to argue that Republican hawks “created” ISIS.  This statement is getting a lot of attention, and for good reason: it’s an amazing and strange thing to say.  Watch:

Team Hillary is probably already scrambling to get this into a campaign ad.  Bernie Sanders may also be wise to spend some of his significantly more limited campaign cash on ads showcasing this statement.

Rand will be walking this back for the next several days, but what it shows is not only a worldview that is unlikely to win him many GOP primary votes but also the sort of adolescent petulance we’ve seen in him before.

It’s also unattractive and unpresidential.  As Rand is likely learning, “uh uh you are!” is not a good way to approach important questions about foreign policy, national security, or America’s role in the world.

Hmmm — would the world be all peaches and cream if Saddam Hussein was still in power?

It would be a lot quieter over there.

If a JournoList doesn’t report an event, did it happen?

If a baby is killed in the womb, inside a clinic’s walls, and no one hears its first cry, was it/we ever alive?

They don’t cry much after you kill them.

That’s exactly how I feel about jihadis.

Paul is like a Russian doll set. I keep wondering what the next little doll will reveal.

But Faberge eggs are so beautiful.

You don’t remember McCain palling around with terrorists in Syria?

And nobody said nothing about the fact that he was an illegal alien in Syria. There is no way he got a visa from Assad.

Facts do not come from The Beast.

Rand might be closer to the truth then you want to admit.
http://www.globalresearch.ca/truth-revealed-mccains-moderate-rebels-in-syria-are-isis/5426535

Repeated posting is a strong sign of a troll.

We might be learning how to balance the need to get involved in critical situations and when to stay away. For me, the answer always shall be whether that event would harm our country or our national interests. Altruistic engagements like Cuba in the 1890’s or our incursions in the Banana Republics in the 1920’s and 1930’s should not have happened in the manner that they did; I very much agree with MG Smedley Butler’s viewpoint on those incursions.

When we do step into the murk, we need to know what our objectives are and how effectively achieve them; The US totally FU’ed in Iraq by disbanding Saddam’s forces and that’s what created much of AQI and ISIS.

Of course, our petulant president truly did further implement ways to radically transform the US by wiping away everything achieved in the ME prior to his term; leading from behind is but one of his ways of doing that.

A dumb thing to say.

Nonetheless, it’s ten times smarter then anything said by either Obama or Hillary Clinton.

Rand Paul made a mistake, here. He let an interviewer put words in another Republican’s mouth. The interviewer, of course, was attacking BOTH Graham and Paul, probably because the interviewer is a Democrat.

All of the Republican candidates would be well-advised to learn how to avoid taking that bait.

this is as bad or worse than Obama, Rand Paul CLEARLY DOES NOT UNDERSTAND MUSLIMS/ISLAM. make Rand Paul unfit for POTUS. just saying

It wasn’t a gaffe. It was considered and correct. He said the exact same thing in a WSJ op-ed last year.

It’s common sense. What part of it do you disagree with?

A reasonable degree of foresight should be a prerequisite for holding high office. So should basic hindsight. This administration has neither.

But the same is true of hawkish members of my own party. Some said it would be “catastrophic” if we failed to strike Syria. What they were advocating for then—striking down Assad’s regime—would have made our current situation even worse, as it would have eliminated the only regional counterweight to the ISIS threat.

Our so-called foreign policy experts are failing us miserably. The Obama administration’s feckless veering is making it worse. It seems the only thing both sides of this flawed debate agree on is that “something” must be done. It is the only thing they ever agree on.

Rand Paul has every right as an American and a US Senator to opine on the creation of ISIS. He has asserted that his own party, the GOP, created ISIS.

Whether he is right or wrong becomes immediately irrelevant, because he just killed any possibility he’ll win the GOP nomination, plus he’s doubled the Democrats’ ammunition against the GOP on foeign policy for the 2016 election. In doing so, he’s done more for the Democrat Party so far in this cycle than anyone in the Democrat Party. Well done, Mr. Paul?

The crazy gene is apparently deeply entrenched in the Paul family. I was hoping that wasn’t the case.

Nurture. Political positions and philosophies are not genetically encoded, they are acquired characteristics, familially and/or communally reinforced.

“Hawks” didn’t create ISIS, Islam created ISIS. Of course we must not notice this in today’s politically correct culture, so Republicans get blamed instead.

Infantile Defiance aka High Chair Pounding is a worthy ‘tell’ on a politician’s worth…or WORTHLESS.

Barack Obama went extra miles in the creation and vast spread of ISIS. He abandoned the hard won Victory in Iraq. RETREATED from the Victory. Unforgivable and Loathsome. He broadcast scrawny weakness to our enemies and potential enemies. He gave our friends and allies every reason to trust nothing blathering from his lying pie hole.

A Human Catastrophe. Are we not Blessed?