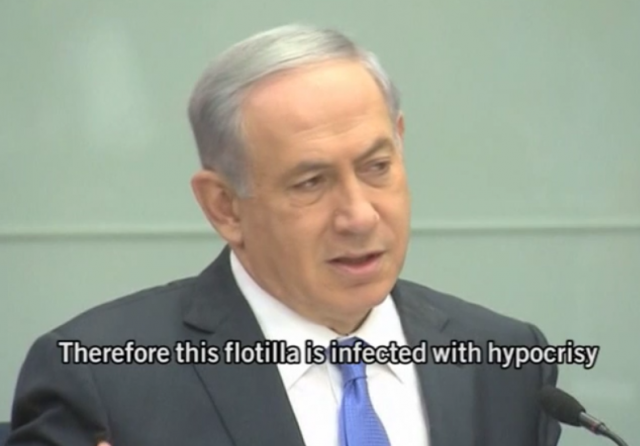 At least no one got hurt this time.

But Gaza Flotilla III was a complete flop.

Meant to break Israel’s perfectly legal naval blockade of Gaza (more on legality here), designed to stop Iranian shipments of weapons, the flotilla avoided the disaster of Gaza Flotilla I, in which 9 people were killed when they attacked Israeli commandos boarding a ship.

This time, when it appeared Israel would prevent the flotilla from getting to Gaza, three of the boats called it off. The main boat, from Sweden but bearing an Israeli Arab lawmaker and the former President of Tunisia, proceeded, and was boarded by Israeli commandos.

The IDF posted the following announcement:

After exhausting all diplomatic channels, the Israeli government ordered the Israeli Navy to redirect a vessel in order to prevent a breach of the naval blockade of the Gaza Strip.

In accordance with international law, the Israeli Navy advised the vessel several times to change course. Following their refusal, forces visited and searched the vessel in international waters in order to prevent the intended breach of the maritime blockade of the Gaza Strip. The forces have reported that use of force was unnecessary, and that the process was uneventful. The vessel is currently being escorted to Ashdod Port and is expected to arrive within 12-24 hours.

Prime Minister Benjamin Netanyahu congratulated the commandos on “their determined and efficient action in detaining the passengers on the ship that tried to reach the Gaza coast in contravention of the law.”

“This flotilla is nothing but a demonstration of hypocrisy and lies that is only assisting the Hamas terrorist organization and ignores all of the horrors in our region. Preventing entry by sea was done in accordance with international law and even received backing from a committee of the UN Secretary General,” Netanyahu said in a statement released to the press.

Earlier, flotilla organizers said that three other boats accompanying the Marianne had turned back to their ports of origin, without explaining why, and that the Marianne was sailing toward Gaza on its own.

STATEMENT: Israel once again commits an act of state piracy in the Mediterranean https://t.co/MbO1OlCbCl #SOSFreedomFlotilla

” Earlier, flotilla organizers said that three other boats accompanying the Marianne had turned back to their ports of origin, without explaining why, ”

Maybe they had something to hide from the eyes of the Israelis?

{Sarc} Are you suggesting that they might have been carrying something prohibited. GASP!! THE HORROR!

My guess is that they were carrying a reasonable amount of prohibited weapons / supplies which could have either “dual use” capability or just outright had embargoed weapons.

Either that, or the captains were afraid that the Israeli Military would board their ships, capture the ships (confiscate the ships), take any goods a prize (confiscate the goods) then arrest the crews for violation of a lawful naval blockade in conformance with a Israeli Law and UN Article 42.

Really, that is what the Israelis should do: Any time these MORONS try to do this sort of a flotilla breaking operation, the Israeli Navy should go out, meet the flotilla, and say “thanks for donating your ship to the Israeli Navy.”

Prize-taking has been illegal since the mid-19th century.

No doubt the UN will be screeching that the Israeli’s committed war crimes by stopping the flotilla.

The Palestinian cause is there for Arab and muslim leaders to point at when they need to distract their people.

Their people are already well and truly distracted at the moment.

But Gaza Flotilla III was a complete flop.

Flop Flop, Fizz Fizz, OH! What a relief it is!