Ann Coulter takes on Bill Maher and friends regarding her book, Adios, America!

As with most Ann Coulter books, her new volume Adios, America! has liberals in a twist.

Ann Coulter is back, more fearless than ever. In Adios, America she touches the third rail in American politics, attacking the immigration issue head-on and flying in the face of La Raza, the Democrats, a media determined to cover up immigrants’ crimes, churches that get paid by the government for their “charity,” and greedy Republican businessmen and campaign consultants—all of whom are profiting handsomely from mass immigration that’s tearing the country apart. Applying her trademark biting humor to the disaster that is U.S. immigration policy, Coulter proves that immigration is the most important issue facing America today. 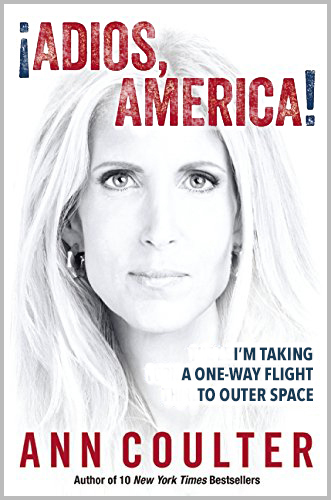 Media Matters quickly developed the meme for attacking the book:

Conservative commentator Ann Coulter recently credited hate website VDARE.com editor Peter Brimelow with inspiring the attacks on progressive immigration policy within her new book, ‘Adios, America.’ In fact, many of the ideas presented in the book appear to be closely modeled after ideas presented by white nationalist and anti-immigrant extremist movements in America.

Perhaps it’s best to let Coulter explain it herself, as she did on the Bill Maher Show (h/t BizPac Review):

Two @Cornell grads duke it out… Sadly, such debate probably wouldn't be permitted on campus today. Too triggering. https://t.co/o5jR9Y2i4s

I think this just confirms that trying to reason with progressives is a total waste of your time.

Ann and Donald Trump are two of few who dare to speak out on unending immigration, legal and illegal. For Jeb, breaking into the US illegally is an “act of love.” Ted Cruz is almost as bad as Jeb, wanting to double legal immigration and proposing a 500% increase in H-1B visa. Cruz policies would of destroying middle class America.

Immigration cannot exceed the rate of assimilation and integration. Unmeasured or mass immigration cannot be counseled in that it causes development pressures. Immigration policies that ignore motives for emigration cannot be generally tolerated. Illegal immigration serves to corrupt the rule of law, violates civil rights, and grants amnesty to causal effects. Immigration should not be used to compensate for lost forward demand through liberal fiscal policies, including excessive credit and trillion dollar deficits. It should not be used to promote class diversity in order to fractionate and control the native population. Finally, immigration should not be used to compensate for the consequences of pro-choice doctrine, specifically selective-child policy, that has promoted social corruption and evolutionary dysfunction in the native population. As well as the debasement of human life through premeditated termination of over one million [wholly innocent] human lives since its legalization and subsequent normalization.

Miss Coulter (notice I’m making good on my disdain for PC crap) has written a very valuable, thought-provoking book that should be read and synthesized by every American…especially any that aspire to high elective office.

I like that she identifies overlapping and convergent interests that have an incentive to continue excessive and unmeasured immigration. It’s important to identify the exceptional situations, especially in lieu of qualifying principles. The panelists, unfortunately, only demonstrate an interest in creating democratic leverage and exploiting emotional appeals to build their capital and power, and suppress debate of the issue(s) on their domestic and foreign merits. It’s telling who and what they selectively include and exclude in their narratives.

Coulter and Maher are both Cornell grads. Unfortunately, such a debate could never happen at Cornell. It would be too triggering.

Notice that the Democrat panelists talk about “positive rights”, including “immigrants doing the work Americans [supposedly] will not do”, “natural-born citizenship rights granted to the Posterity of parents [not subject to Constitutional jurisdiction]”, and “equal[ivance]” that is framed as universal but is notable in its selective exclusion.

That said, there are clearly overlapping and convergent partisan interests. The Democrat political and corporate interests alone would not be able to compensate for the civil and labor consequences of excessive and unmeasured immigration, and progressive economic warping caused by liberal fiscal policies including trillion dollar deficits.

Well, if democratic leverage is key, then “promote the general Welfare” was a good start. The social policies enacted by classical Progressives and conscientious Republicans would be the next logical step. As well as securing and growing the American middle class through economic development.

For better or worse, it’s unlikely that people here illegally will be deported in mass. So, what now? The principle concern is that immigrants assimilate American principles and integrate with American society. Then there are conditions in second and third-world nations that prompt large-scale emigration; the overlapping and convergent partisan interests in America; and the domestic choices that sacrifice our Posterity.

“For better or worse, it’s unlikely that people here illegally will be deported in mass.”

What other crime do we exempt from just punishment so casually? Certainly none that has such an adverse impact on our society.

The “mass deportation” lie is simply a straw man’s argument. Nobody real (to my knowledge) is making it.

Partly for the excellent reason that mass deportations in the “round-up” sense are unnecessary and stupid.

Gradients are powerful things, and subject to rational use/change. Change the gradient regarding illegal immigration from positive (coming to and staying in the U.S.) to negative (leaving the U.S.), and you solve the problem of deportation. It requires not draconian or “mean-looking” elements. Simply make employment of illegals VERY expensive and welfare benefits to them essentially nil. They will self-deport using what would have been their next moneygram to their home.

Yeah, they will “self deport” over time, back to their homeland. They are not “undocumented immigrants”. They are foreign nationals. They already have voting rights, in their home country.

Ann’s interview shows the left’s emotion based hate, for anything that protects the liberty for which “we” fought. But even with their off target responses to Ann, I think ANN won, probably even in the eyes of many of Maher’s liberal viewers, though not the ones in that jeering crowd.