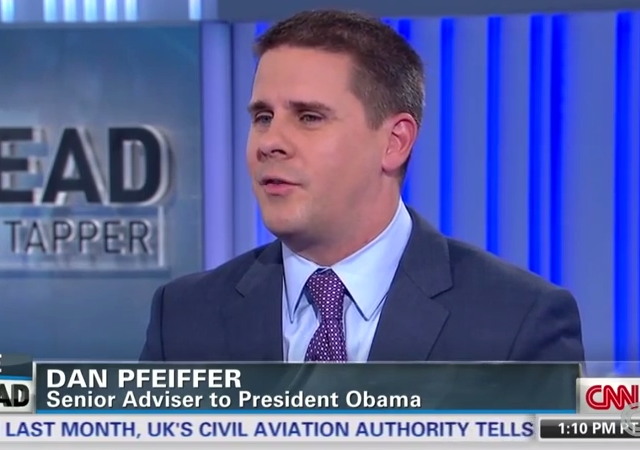 Now that former Obama aide Dan Pfeiffer is joining CNN, the number of Obama administration officials in the mainstream media has shot up to five. David Axelrod and Robert Gibbs are on the payroll at MSNBC, and CNN is also home to former “Green Jobs Czar” Van Jones. Jay Carney also went to work for CNN but has since left.

As John Nolte of Breitbart points out, two members of the George W. Bush administration (Dana Perino and Karl Rove) went to work for FOX News, but not while Bush was still president.

CNN made the announcement yesterday:

The 39-year-old Pfeiffer is a Wilmington, Delaware, native and a graduate of Georgetown University.

He left his post as the White House’s senior adviser for strategy and communications in March as one of Obama’s longest-tenured strategists.

His role with Obama started in 2007, when Pete Rouse — who hired Pfeiffer in former Sen. Tom Daschle’s office — recruited him to join Obama’s presidential campaign.

I wonder if Pfeiffer will take an objective view of the news?

White House senior adviser Dan Pfeiffer on Thursday compared Republicans to terrorists and arsonists because of their tactics surrounding the debt ceiling and attempt to defund ObamaCare.

Speaking on CNN’s “The Lead,” Pfeiffer was asked why President Obama wouldn’t negotiate with Republicans by accepting some spending cuts in exchange for raising the debt limit.

“We are for cutting spending,” Pfeiffer said. “What we’re not for is negotiating with people with a bomb strapped to their chest. We’re not going to do that.”

Pfeiffer called the House GOP’s list of items it wants in exchange for raising the country’s borrowing limit “ransom demands.”

He might have been a better fit for MSNBC.

What better way to control the propaganda message lies narrative?

CNN ensuring any and all Democratic guests receive a proper George Stephanopoulos style interview.
The Olde Propagandameister, Joe Goebbels, never had its so good.

No doubt he will do commentary on the republican debates. Unbiased, of course. NOT

Dan has to be a direct descendant of Polyphemus, right?

A network nobody watches is adding a guy…

They should require that a knob be surgically implanted in the middle of the forehead of newly hired media members, especially those leaving government: LEFT/NEUTRAL/RIGHT

Well, thank god, I was beginning to think that I’d never hear the Administration’s side of the argument in the MSM.

What about Tony Snow? Surely Nolte hasn’t forgotten about him (RIP).