The question is “why?” 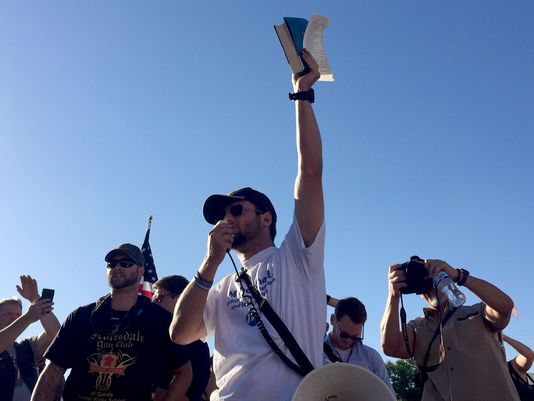 A protest at a Phoenix mosque was held late Friday afternoon in response to two Phoenix residents driving to Texas last month looking to engage in violence because of a “Draw Mohammed” contest that was going on there:

Police officers lined barricades separating protesters and counter-protesters who gathered outside a Phoenix mosque Friday evening in response to a planned “freedom of speech” demonstration where attendees were encouraged to bring weapons and “draw Mohammed,” an act offensive to many Muslims.

Police presence increased by 6:30 p.m. to physically separate the two sides outside the Islamic Community Center of Phoenix.

About 20 cars and 15 motorcycles traveled from a protester meeting point at a nearby park to the mosque around 6 p.m., where people from the two sides used megaphones to yell at each other and were at times nose-to-nose.

A large group of counter protesters held signs reading “Love not Hate,” as others waved American flags and one man ripped the Quran in half.

The protest went off without any acts of violence. There were no fights and no riots.

One area where even supporters of the protesters split was in the decision of some to carry firearms. Arizona is an open carry state, and some of the protesters were openly carrying firearms, including rifles that would naturally be mistakenly referred to “assault weapons” or “automatic weapons.”

White House spokesman, Josh Earnest was asked about the protest. Here is what he had to say:

Here are some of his comments:

Whether one agrees with what the protesters did, nothing they did was illegal. They were engaging in the right to peacefully assemble, engage in free speech and were exercising their second amendment rights and keeping with Arizona law.

So the question has to be asked: Why is the government “monitoring” any of this? There are plenty of people the DHS should be monitoring. People engaging in perfectly legal behavior should not be among them.

Why is the government “monitoring” any of this?

Because the government is consistently making the wrong decisions.

Why is the government monitoring this? Did you miss the publication a couple of years back who listed Veterans, NRA supporters and those who support First & Second Amendment rights as potential terrorists?

Mosques should be monitored not those who protest these dens of hatred and sponsored terrorism.

I think having SOME elements of the Federal gobmint “monitor” the Phoenix thing is not just OK, it’s good and they should be. When you have a very public bear-poking going on, it might provoke stupid Islamists to try something evil.

But the “White House”…??? Hell, I bet that there’s another Benghazi in the world somewhere they should be paying attention to right now.

“Some of the protesters were openly carrying firearms, including rifles that would naturally be mistakenly referred to ‘assault weapons’ or ‘automatic weapons.’ ”

So what? In Arizona, provided all the federal hoops have been jumped through, restrictions adhered to, and fees paid, such weapons are perfectly legal to own, carry, and shoot.

Some of the protestors were carrying FIREARMS? And those evil devices did not randomly explode and cause GUN VIOLENCE?

Monitoring just in case some “social justice warrior” (SJW) decides to fire a shot to bring down upon the organizers the full weight of the media/government/Islamist cartel. A tragedy is needed in other words.

Why openly carry? Because they are saying that if their protests are met by violence as they have been in Europe, and even in this country in Waco, they will be armed and ready. That is part of the message, that if Muslims want to live here in peace, then they have to make sure that the other Muslims around them also remain nonviolent in the face of less than positive commentary about their religion.

The WH monitors any and all events with potential for disruptions or outright violence. They’re always on the lookout for a crisis to exploit in service of their political agenda. Stir the social pot, aggravate, agitate, divide, and instigate, then when something somewhere goes postal, move in and exploit it.

This situation reminds me of Kent State: There was a lot of talk by protest organizers about how they planned to turn the protests violent (much as we recognize the moslems could turn violent). The situation was tense enough that a single accidental discharge by a National Guardsman or even a single firecracker set off by a student could have set off the whole mess. Pretty difficult to tell for sure at this late date.

Point being, a single firecracker could have set off a massacre of the moslems there.

Americans do their own aiming, Moslems let Allah do the aiming. Guess who will walk away from a stand up fight?

“Monitoring” doesn’t mean anything here; it’s just an official Governmentese fob-off. If someone has a complaint there’s a phone number in Washington they can call. That’s about it.

“Closely monitoring” would be a bigger deal. That would mean that someone might actually return the call.

They have never “monitored” queers demonstrating out side of Christian churches.