Seattle Police Chief: “This is no longer demonstration management, this has turned into a riot.” 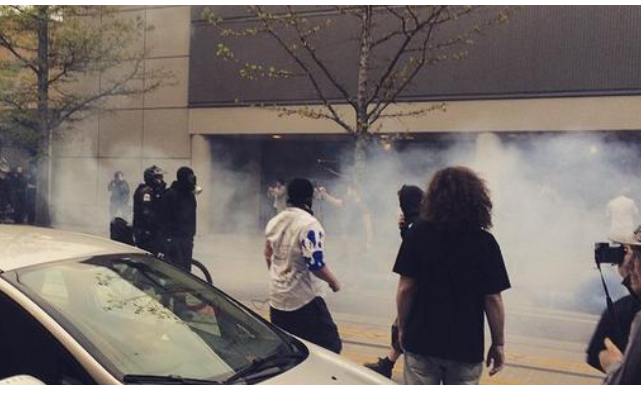 The past few days have been difficult for American law enforcement.

First, the Baltimore officers involved in the arrest and subsequent death of new civil rights icon, Freddie Gray, have had the legal book thrown at them.

Now, protests in several of country’s deepest blue and most “tolerant” areas have devolved into hostilities against police.

Crowds clashed with police during May Day marches in several U.S. West Coast cities late on Friday, as officers responded with stun grenades and pepper spray, police and media said.

“This is no longer demonstration management, this has turned into a riot” -Captain Chris Fowler. #MayDaySea

Video post on News 24/24 shows a snippet of what Seattle law enforcement has been trying to contain.

The tweets from the demonstrations show many white Social Justice Warriors, as some professionally constructed signs amid the home-made variety.

It appears that the Seattle mayor may have participated at some point.

Here in #Seattle we have legal weed & our gay mayor supports & marches with protestors. #FreddieGray pic.twitter.com/JZuGBIHA5f

However, after violence erupted, Seattle’s chief executive had a change of heart.

“Tonight we saw assaults on police officers and senseless property damage, which cannot be tolerated,” Seattle Mayor Ed Murray said in a statement. “Those who are violent will be arrested. We will work to disperse groups that are threatening the safety of our residents and businesses.”

Police also clashed with protestors in the progressive haven of tolerance known as Portland, too.

Portland police used tear gas, flash bangs and what they called “noise distractionary devices” to try and disperse protesters in downtown Portland Friday evening. At least one officer was injured during the clashes. The group Don’t Shoot Portland, protesting excessive force by law enforcement, marched through downtown Portland Friday afternoon and joined an unrelated May Day rally for immigrant rights.

Here is the modern-day activists’ idea of a trophy:

The total number of flash bangs were used against Tea Party protest participants during its entire history: Zero. But, I digress.

I will simply point out that, like in Seattle, the Portland demonstrations appear to feature more than a few white Social Justice Warriors and high quality signage.

On the other hand, related demonstrations in the Golden State were much calmer. May Day celebrations of “International Workers Day” melded into racial justice politics in several Northern California cities:

May Day activists who traditionally marched for labor and immigrant rights in U.S. cities on Friday broadened their message this year to lash out against police brutality and the “tech elite,” where in Silicon Valley, many are being forced out of high-priced, gentrified neighborhoods. That includes Black Lives Matter protests throughout the Bay Area – with official rallies, pickets and shutdowns on Friday in Oakland, San Francisco and San Jose.

In my home town of San Diego, the demonstrations were also peaceful:

Demonstrators chanted “No justice, no peace, no racist police,” in San Diego as a symbol of solidarity with Baltimore protesters in their own march Wednesday. About 150 demonstrators marched in City Heights for the victims of police brutality, per CBS 8. Although there were reports of a demonstrator throwing a bottle, police say the protest was mostly peaceful.

Looking at all the information, I have to join the chorus of analysts asking, “who benefits” from this unrest?

I also project that we will see even more of these “organic” protests arise, as distractions from the failed, feel-good, progressive policies that have created the toxic economic conditions that may have led Freddie Gray to start his drug dealing in the first place.

Barack Obama wants to see every American city on fire. Its what Community Organizers do best.

Both foreign and domestic…it’s gonna be a long, dangerous next 19 months.

hmmm, very curious.
in my neighborhood, if there was a career miscreant with 18 busts for dealing drugs to folks and kids, ruining untold lives over the years, well, we’d be saying good riddance to bad rubbish.
and some of my neighbors might just supply vigilante justice for the slow motion killer.
but in the negro world the dealer of death and misery must be praised and rioted for. the difference is as clear as black and white.

MOST of the people in “negro world” are NOT rioting, and NOT supportive of drug thugs. As a matter of fact, very FEW are.

MOST of the people in America…of any color…are law-abiding and not drug users or abusers. How do you think our laws get passed?

I could make the case that white people are the prime supporters of rioting and drug use…by other people in the former case and themselves in the latter.

And WHO are the prime victims of rioting and drug use? I’d submit they are law-abiding black Americans.

I lived for 8 years in Seattle. I should have left a LOT earlier. Stupid place of stupid people with stupid ideas. And lastly and most importantly Seattle is as racist a place as I have seen (and I have seen a lot of places), and the way racism is carried out there is sickening. People there are completely delusional.

Houston is the liberal armpit of Texas but it’s still better than most cities in other states.

DFW and San Antonio (although it has its own liberal issues) are better.

Annnnnnnnnd I totally let Austin off the hook without thinking about it. They’re first worst.

I disagree. Houston is…weird. It is VERY conservative in many respects. But, yes, we have a lesbian mayor, and we had Lee Period Pee Period Brown as mayor, too. No accounting…

(Which is why I do NOT live in Houston, proper.)

But it is also WAY more conservative than San Antonio (where I spent my teens) OR Dallas/FW. Dallas is a lil’ bit she-she, a lil’ bit effete. San Antonio has been the home of some of the MOST outright commies in Texas history, and has elected several to national office.

This is not rioting. It is simply blacks shopping.

What a stupid and counter-productive thing to say. See above.

Seattle was attacked by thugs of all colors, and your racism isn’t OK.

Rags, let’s deal in facts rather than epithets. Just as one example, blacks are 13% of the population yet commit 52% of the murders in this country. Black on black and black on white violent crime statistics are horrendous. As a group, blacks contribute FAR more than their share to crime statistics in this country. You know all this. You are correct, of course, in observing that most blacks are not engaged in criminal activity, but it is unreasonable not to draw some statistically warranted conclusions from the facts.

What inferences do you draw from the statistics?

First, saying a racists IS a racist IS NOT an “epithet”.

Second, let me tell you what I DON’T do.

I DON’T look at a rioting mob made up of a mix of thugs from ALL races, and say that ONE race is “shopping”.

I DON’T confuse statistics with people.

If you DO, you and I have little to nothing in common.

I agree with Rags somewhat.

The culture that has invaded black youth mentality is destructive and hostile. That is why there is a huge disparity in crime statistics. However, to lazily use external data to categorize based on skin color is lazy racism, and no better than the SJWs that think they can “prove” the system is racist because more blacks are incarcerated than whites.

On the matter of statistics (which CAN tell us SOME things)…

Thomas Sowell (‘negro world’ occupant), who I’d be a WHOLE FUCKING LOT more proud to know than the racists who have posted here, points out that OBJECTIVE, EMPIRICAL testing showed Jews were several IQ points behind other American demographics about the time of WWI. LOOK IT UP.

However, after a few generations, that deficit had been erased, and was trending the other direction.

May Day is their big holiday.

They spent the past 30 years appropriating the thug mantle to the point where being black is ALMOST part of the definition of the word, but don’t CALL them thugs — wouldn’t want to make them cry.

Well, it is known as The Left Coast. Father Serra’s constructive genius is long dissolved away by the likes of Harry Bridges and Alan Ginsberg.

Re that picture of the marching whosit, mayor of Seattle, it appears taken on a winter’s day, not two days ago in Seattle, where it was mostly clear and sunny and a little warm.

Seattle used to be a constructive Democratic and Republican area, Americans and proud of it.

Funny…Truly snicker provoking…PORTLAND, Oregon, is racially as white as snow. Left ya unnerstan’, but WHITE. Can’t be outdone by those spoiled white brats up there in Seattle….Sooooooooooooooooooooo, to the barracades!! By pinhead twits who’ve never, ever, everrrrrrr been inside a ‘hood for ohhhhhhhhhhhh 1 to 3 minutes. Ever.

Baltimore has been the Poster Child for 50-years of Liberal Great Society Carnage. Lemme see…The 3-black officers of the 6 being held are…what…”Traiters to their Race”,’Yo??!! Wascally wacists. Bwoots. Baaad. In Liberal Land you can’t be both Black and Stand-Up Adult opposed to race hustling snakeoilers and NOT be a Traiter to your Race,’Yo.

I hate to defend the delusional citizenry of Seattle but these Mayday riots have been going on every year since the WTO and it is common knowledge that riot seeking anarchists travel from all over (Eugene OR in particular) to tear up the city once a year. The shocking thing is that the police haven’t done more to crack skulls, particularly the skulls of outsiders.

It is disturbing that this phenomenon, the traveling hooligan, a well known and understood in Europe but somehow escapes general description and publicity here in the US. Perhaps the papers simply enjoy having a bust up to write about each year.

The most violent of these repeat offenders call themselves the Black Brigade and come from as far away as Germany to engage in their political mischief. Yes, there are plenty of losers in Seattle who are inclined to such behavior, but the feds should have a better grip on this stuff than they do. Interpol, by way of contrast, is almost always ahead of the soccer hooligans traveling Europe and engaging in similar behavior.

Anarchists terrorizing smug belligerent self righteous libtards and the businesses that cater to them?

Sorry – I’m rooting for the anarchists on this one.

Generally, rioters/looters can be dealt with in two ways:
In the first way, they can be filmed while in the process of their criminal activity and arrested. Provided you actually have a functioning judicial system, they are then charged with the obvious crimes they’re caught on tape doing, and HELD until they can provide bail. In the event they’re caught a second time while out on bail, they’re screwed, and make sure they know it. Most likely they won’t stand trial until after things have calmed down, at which point a certain amount of plea bargains can be waved around, but not before, and only in cases where it makes sense.

Or in the second way, you can shoot them.

We’re a civilized society. We prefer the first way, provided we’re serious about stopping the rioting. Baltimore is not serious.

This was in Washington and Oregon. Heavy fines are reserved for Christian bakers and flower shops refusing to serve at gay weddings; the villains these progressive cities feel to be the true enemy. So many in Seattle and Portland are just fine with the anarchists and the black on white racism- they view it as justice.

They can burn that $15/min wage on their insurance deductible for the broken windows.