Grab the tissues, you’re going to need them 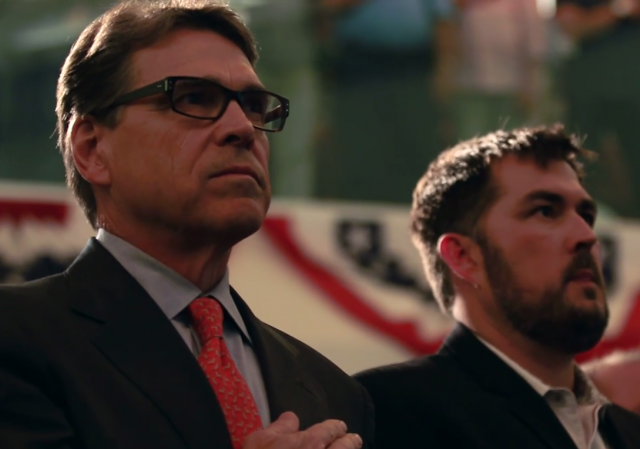 Wednesday we shared the heartwarming story of how Governor Perry and Marcus Luttrell forged a relationship that transcends politics. It’s easily one of my favorite stories as of late.

Gov. Perry’s relationship with Luttrell is one markedly different from the overplayed politician parades soldier for political expediency schtick.

Following the Taliban ambush in Afghanistan, Luttrell found himself struggling to recover from substantial physical, mental, and emotional trauma. That’s when Luttrell reached out to Governor Perry. Their relationship blossomed into a story of love, sacrifice, redemption, and hope.

WARNING: You might want to grab the tissues before clicking the ‘play’ button.

The Perry’s opened up their home and family to Luttrell. “Thank you for being my best friend and my father figure,” said a teary-eyed Luttrell at the Ronald Reagan Presidential Library’s Perspectives on Leadership Forum Monday.

No stranger to a uniform, Governor Perry is a also a military veteran. Serving five years in the Air Force after graduating from Texas A&M University, Perry has long been a champion of military service men and women.

It is time to tell the truth to the American people that both parties have gutted our defenses rather than impose spending discipline on other areas of government. It is time to get real about the fact that while our enemies are building ships, we are reducing the size of our fleet. That while fanatics are growing their armies, ours is at risk of being reduced to dangerous lows.

…Let no one mistake a call for the rebuilding of our defenses as a call for increased war.

Kimberlee: thanks again for showing this relationship between Lutrell with the Perrys. I take back my suggestion that Marcus could use more media training. He looks pretty good in this Perry promo. No tears watching, just beaming proudly in seeing his courage and strength in recovery. That’s what our truly great soldiers are all about – honor, courage, strength. Both Rick,”Lady” Perry and Marcus exhibit these traits.

Re “Lady” Perry: few understand the strength and courage it takes to be a loved ones of our soldiers. Their support is crucial. I know this only too well and I’m still married to my support base. Lady Perry became Marcus’ support base, and I can only say, God Bless her.