A friendship that transcends politics 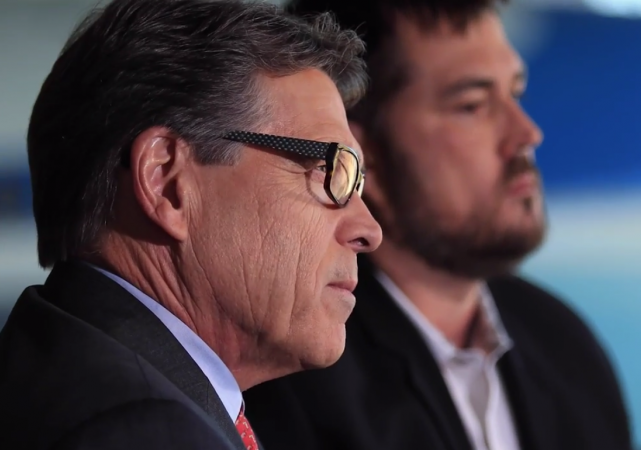 “These are extraordinary people that step forward and serve their country,” Perry said of military service personnel. “Tonight you are going to hear from one who simply understood that he owed a debt. A debt to the individuals who had come before him. In the form of William Barrett Travis at the Alamo, his father before him, my dad, all of those men and women who have stepped forward to keep this country free. We are incredibly blessed… we are in the presence of some extraordinary beings. And none more so than the one you’ll hear from tonight. Just a regular, common, country boy who found himself in extraordinary circumstances.”

Gov. Perry’s relationship with Luttrell is one markedly different from the overplayed politician parades soldier for political expediency schtick.

In 2007, two years after he survived a Taliban onslaught in Afghanistan, a distressed Luttrell showed up at the Texas Governor’s mansion and asked to speak with Rick Perry.

Philip Rucker of the Washington Post tells the heartwarming story:

…While undergoing physical therapy at Naval Base Coronado near San Diego, Luttrell met Rick and Anita Perry by happenstance. The Perrys, who have two grown children, were vacationing at the Hotel del Coronado and Luttrell was assigned to give them what he called a “dog and pony” tour of the naval facilities.

Perry kept in touch, sending Luttrell e-mails, including throughout his 2006 deployment to Iraq, and extended an open invitation to visit him in Austin. Luttrell took him up on it, showing up at the security guard post outside the governor’s mansion one day. “It was a safe haven,” Perry said.

Later that year, when the Perrys moved into a temporary residence for the mansion’s renovation, they turned a third-floor space into a bedroom for Luttrell. Anita Perry (Luttrell calls her “Lady Perry”) gave him an air mattress and a television, which he liked to leave on while he slept.

“I’m not sure I can put into words how my wife and I were attracted to him or he was attracted to us,” Perry said. “I kind of put that in the ‘grace of God’ category.”

Over the ensuing months, a virtual father-son relationship blossomed, the two men said. The governor and his wife, Anita, helped bring Luttrell back to health. Perry used the power of his office to find Luttrell a spine surgeon to fix his back. The Perrys gave him a spare bedroom — “I was the creepy guy in the attic,” Luttrell recalled. The governor took him bass fishing, the first lady counseled him about his love life, and as Luttrell became famous — first with a best-selling memoir, “Lone Survivor,” and later in the movie adaptation — they were his rock.

“When I came into the Perry family, it was one of those deals where it was the only family I had,” said Luttrell, who was born in Houston and grew up in Texas near the Oklahoma border. “I didn’t have that father figure growing up like that, somebody who genuinely cared about me. . . . Governor Perry taught me how to be a good man.”

Through the course of his recovery, Luttrell developed an addiction to prescription pain killers, as the WAPO explains, “As Perry tells it, Luttrell was lost in a bureaucratic maze at the Pentagon and at the Department of Veterans Affairs. “He needed stuff done,” he said, “and all he was getting was a sack full of pills.” So Perry stepped in and called Navy Secretary Ray Mabus, who made him eligible for Tricare. “There are 1,000-plus just like him,” Perry said. “They just didn’t have a governor to intervene. And that pisses me off.”

Thank you, what a wonderful story. I’ve always liked Rick Perry, even when no one else has.

My mother’s 2nd husband was a WWI and WWII vet, USMC, RCA, RCAF, US Navy, and he would go out to the old Mpls VA and get 200-cap bottle of Valium, and use them like candy.

The point is that the old Mpls VA just gave Valium out in buckets full and that didn’t help that old fool deal with his problems at all . He died in 1982, at age 82, and the last several years of his life, don’t know if he was ever really sober. He drink heavily and took Valium all the time.

On point: Do really like Perry also and hope he makes a strong run this time.

you can often judge a man by the quality of his friends…..

Being governor of Texas has got to be the best job in the world. By the time I left office, I would weigh 500 lbs. I could eat my way across the whole damn state and then, in my second term, turn around and eat my way back.

I miss Texas BBQ at Cotton’s in Robstown. I miss Rockport shrimp at the Hu Dat Resturant.

Hell, we’ll even send you smoke signals. Getting the BBQ fired up right now. Let me see, now where did I put that brisket …

I’m happy for them and I’m glad he is calling attention to this.

I don’t think people volunteer to serve for the praise, the pay ( hahaha…), the glory, etc.

I think they know that someone has to step up and if they don’t , who will?

Some don’t make it back alive. “All gave some, some gave all.”

I think that the government is not holding up to its side. Our veterans that survive and return home need to be taken care of.

Unlike the parasites of society that don’t contribute a damn thing and continue to feed off of all of us, these men and women are entitled to all the care they need to get on their feet and stay on their feet in the civilian world.

To see the government continue to consistently fall short of this task pisses me off too.

The shame is everything our tax dollars are spent on that is far less worthy than the care our vets deserve for serving their country.

Perry would or should be an instant top-tier candidate. While Walker fought the good fight on enemy ground, Perry had a fertile field of opportunity but with some entrenched interests and institutions to deal with. He did very well with his chances, one of his few errors being his ill-fated 2012 campaign.

Both men played the cards they were dealt and made the most of them. In that, they are both the opposite of Obama.

I hope Mr. Lutrell reads this.

Marcus: I would urge you to stand by Rick at every rally that he holds. Besides being good for Rick’s image, it will send a message to the country that America’s soldiers and veterans are not damaged goods. You know it and I know it, we are NOT damaged goods. We are strong, we have survived tough conditions, we are smart, we are productive, and we love our country. Just one condition, you should probably recognize that you could use some media training. Your story is powerful and you have a huge notoriety – use it!
-aGrimm, 1st Recon, A Company,’70-’71, Vietnam, corpsman. Semper Fi

You and people like you are the back bone of of our country. You make us proud beyond measure. While ‘thank you’ hardly seems sufficient, I cannot accurately articulate my gratitude for your service and sacrifice .

Kimberlee: thank you very much for the sentiment. I just did the job I was asked to do. However, when we came home, we were denigrated in all kinds of disgusting ways, e.g. we were called baby killers and druggies. The same denigration is happening to the GWOT soldiers/vets and active duty soldiers but in a much more insidious way. They are being portrayed as damaged goods via PTSD and suicides. Yes there are some who have these problems, but the vast majority of soldiers and vets do not. You know the 22 suicides/day meme that we hear all the time? It is not active duty personnel and it is not the younger vets who are committing all these suicides. 15-16 of those 22/day are in the over 50 age group (Vietnam veterans). Under the age of 29, veterans have about a 1.3/day suicide rate and active duty personnel have a less than 1/day rate. Compare that to the 96 suicides per day national average for all ages and the 18/day in the under 29 non-veteran (civilians) age groups. So why does the media and others leave us with the impression that our younger soldiers/veterans are committing the 22/day – follow the ideology and money and you have the answer.

What a remarkable story. As a Texan, my comment about Rick Perry is: “He’s an S.O.B., but by God he’s our S.O.B.” What that means is that Rick Perry was sold out for Texas. If you didn’t like it, tough. He was always a champion for Texas.