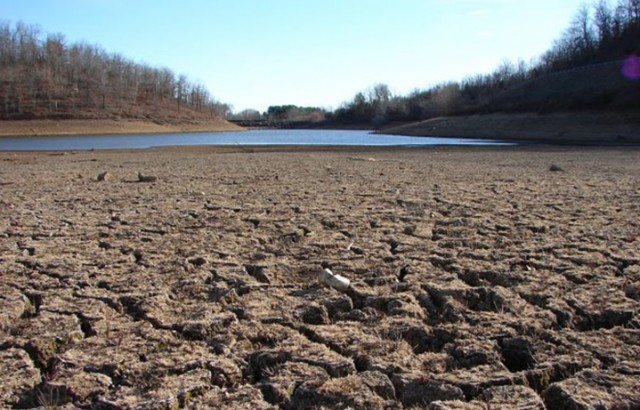 When the history of the past decade gets written, it will be peppered liberally with the word “unprecedented.”

California Governor Jerry Brown recently unveiled the state’s first water restrictions in response to the “mega-drought.” In a move that will surprise almost no one, our state legislature passed the “unprecedented” proposal:

California regulators approved sweeping, unprecedented restrictions Tuesday on how people, governments and businesses can use water amid the state’s ongoing drought in the hope of enticing residents to conserve more water.

Gov. Jerry Brown sought to tighten the already strict regulations, arguing that voluntary conservation efforts have not yielded the water savings needed amid a four-year drought. Brown ordered water agencies to cut urban water use by 25 percent from levels in 2013, the year before the drought emergency was declared.

San Diego will be facing a 16% reduction. The regulators are of course blaming the citizens for not going along with the well-advertised voluntary water-use reduction campaign.

The action comes 15 months after Brown urged a voluntary 20% reduction in water use in January 2014.

“We asked to do a voluntary 20% and almost no one did,” said Water Board Member Frances Spivy-Weber. “And that’s why we have mandatory … It’s the price for not seizing the day.”

This excuse is a little perplexing to those of us who live in San Diego….as our water use dropped substantially at the end of 2014.

Water officials said the result was evidence that many residents, businesses and farmers turned off their irrigation systems for long periods of a series of rainstorms. The savings totaled 10,636 acre-feet, enough to serve more than 21,000 typical four-person households for a year, according to the agency.

But why let a few facts get in the way of new revenue-enhancing rules?

One development that is truly unprecedented, however, is Brown’s scale-back on several pieces of proposals enthusiastically embraced by environmental activists.

Gov. Jerry Brown’s announcement Thursday that the state is scaling back part of a long-planned project to restore more than 100,000 acres of fish and wildlife habitat and re-engineer the delta was a sign of how elusive that fix remains.

….State officials said they are also dropping plans to spend $8 billion in federal and state money to restore more than 100,000 acres of fish and wildlife habitat over the next five decades. Instead they are settling for a more modest — but, they said, more realistic — effort to improve 30,000 acres of habitat over the next four or five years at a cost of $300 million, funded with state bond money and other sources.

Since a lot of this activity was centered around protecting the Delta Smelt, and a single smelt was located in the last survey, this is the most sensible decision coming from Sacramento in some time.

Nothing like a leftist ideologue seizing on the “crisis” – as Rahm-bo Emanuel said, “…never let a crisis go to waste.”

I wonder how many in CA and around the nation recognize that Alinsky acolyte comment from Gov. Brown? Or care that he is using it to “fundamentally” destroy what’s left of the Golden State (or the Golden Gate State).

It will be interesting when fire season comes and makes quick work of all the dried out grasses, plants, etc. When the rains come back, things will get even worse. The ground, being so dried out, will not be able to handle the sudden influx of water. The resulting runoff will have nowhere to go and will quickly overwhelm a lot of the drainage channels. There will be a lot of flooding.

I live in Florida and have had water restrictions for most of the last 30 years. Not as severe as California.

Some people might recall a good chunk of northeast Florida burning a while back. That was unusual. the West has frequent wildfires. They have been rare in Florida.

At the moment our rainfall seems to be normal.

Meanwhile, back in North Carolina, I’m sitting naked in a 1,000 gallon tub of water and peach juice concentrate while I type this. Life’s funny sometimes, huh?

He is so fortunate that Nifong is gone.

Now Henry, you do know that real Tar Heels would never soak in peach juice?

If CA kicked out all the 3rd-world, criminal, illegal alien felons …. that would save huge amounts of water and lessen or eliminate restrictions on American citizens. Just sayin’ ….

But then California would lose all of those huge tax revenues Hillary told us about.

Relax, we will just ship water in on our new high speed rail line, it’s all good…

The brilliant leftists apparently don’t believe in evolution, where species evolve or die off all the time, as is the “natural” course of life. Why do they insist on playing God to the smelt, when they could instead fill reservoirs with glorious rainbow trout?

Of course they are really just control freak leftists and their pretenses about smelt and gophers is just a useful lie. Oppressing productive America is what they really care about.

Nature preservation is a noble cause, one I participate in daily as a ‘river warden’ in my Tar River living area. Unfortunately, most such efforts eventually get co-opted by leftists who turn it into a political tool, generally ‘greenies’ vs capitalists or those benefiting from it, at which point it stops being about the snail darter or snowy owl and completely about using them to stymie local business/corporate concerns in the name of natural conservation. This is the history of Greenpeace, PETA, and many other ‘helping’ agencies. Starts out good, gets co-opted, goes left, causes damage and disruption – the ultimate goal.

Green Goo Collectivists share the larger Collective’s root hatred of people. So, having that pathology, it’s “natural” (see what I did there?) to perversely transfer their affections onto other beings and things. Who can’t say no, conveniently.

The worst thing about democracy is that we all get the government we deserve.

I hear those smelts are delicious

Nope…Neither edible nor delicious. Useless and worthless. But soooooooooooooo high-minded and important over those Evil Farmers & their Evil Crops.

Reply by a refugee from The Peoples Insane Republic of Caifornia to Stand Your F-ing Ground Central Florida. AHhhhhhhhhhhhh….((-:

It just breaks my heart.

I’m a California native. I fondly remember the Golden State, where we had the best beaches in the world, the fastest freeways, the highest culture, the best produce. In many ways it really was pretty close to heaven on earth.

Now we have crumbling roads, vast wastelands of parched farmland, we produce much less and it isn’t as good as it used to be… and a massive influx of people who don’t know what Americans are & don’t care, they’re used to their own culture which they brought with them… and DMV gives them driver’s licenses WITH voting cards.

I weep for my once-great State and my once-great Country. We have gone the way of Rome; but as Adam Smith put it, “there’s a great deal of ruin in a nation,” so it’ll take a while before our national body lies cold.

I feel your pain – which is why I am now an idahoan.

Feel your pain, too, which is why I’m in Winter Park, Florida. Miss the geography, but not the “popular culture” and politics and insane level of PC.

Do miss the eastern side of the High Sierras and the Central Coast around Cambria and the view from our living room on the side of the San Gabriels out across L.A. and all the way to Catalina. Or my “church” aka Dodger Stadium.

But, not the Lefty Lunatics in CONTROL. Nope. Nada. Nyet.

Apparently Israel is helping, or going to help, California with a desalination plant which will provide 54 million gallons of water a day.

The plant is using technology Israelis have been using for years, reverse-osmosis, which involves forcing seawater through a film with tiny holes that allow only water molecules to pass through, while the larger salt molecules cannot.

Critics of the reverse-osmosis technology have claimed that it is too costly and requires too much energy, making it environmentally damaging. But IDE Technologies says its production costs are among the world’s lowest and that it can provide an average family’s water needs for roughly $300-$500 a year. Israel’s largest desalination plant, for example, sells desalinated water to the Israeli government for about 60 cents per cubic meter, which is lower than traditional water purification methods. Using highly efficient pumps, the plant also consumes less energy than similar desalination stations around the globe.

California should learn from Israel, which as a semi-desert country has always had a problematic water supply, doubly endangered by Arab terrorists who would try to blow up or divert our water sources.

In recent years Israel has developed a water surplus due to both conservation and desalination. Our founding fathers would be amazed.

Anne, if your figure is correct, 60 cents per cubic meter, that is very low. Along the Outer Banks of NC we have desalination plants (reverse osmosis) and a cubic meter is a bit over $1.50 to the consumer.

Can you confirm this? Thanks!

Oops, never mind, read your linked article where the 60 cents per CM came from…