Traces of Chemical Weapons Found at Undeclared Site in Syria

Traces of Chemical Weapons Found at Undeclared Site in Syria 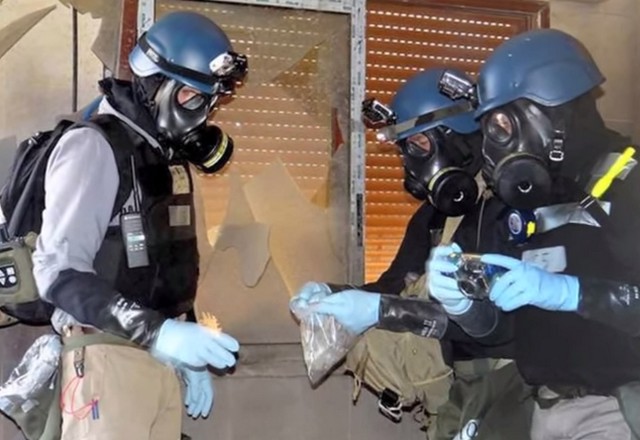 Samples taken by experts from the Organisation for the Prohibition and Chemical Weapons (OPCW) in December and January tested positive for chemical precursors needed to make the toxic agents, the sources told Reuters on the condition of anonymity because the information is confidential.

“This is a pretty strong indication they have been lying about what they did with sarin,” one diplomatic source said. “They have so far been unable to give a satisfactory explanation about this finding.” …

The diplomatic sources said the sarin and VX nerve samples were taken from the Scientific Studies and Research Centre, a government agency where Western intelligence agencies say Syria developed biological and chemical weapons.

After it was established that Syria had used chemical weapons against civilians in a Damascus suburb, President Barack Obama said that he would seek Congressional authorization to use force. But in the end chose the path of diplomacy to deal with Syria’s breach of international conventions by using chemical weapons. The deal, agreed to with Russia, a patron of Syria, called for Syria to declare all of its chemical weapons sites, destroy their chemical stores and destroy their means for making them.

At the very least, Friday’s news means that Syria did not fully comply with its obligations under the deal. At the worst it suggests that despite the hoopla about Syria destroying thousands of tons of chemical agents, Syria has an active chemical weapons program still remaining. (This is in addition to Syria’s use of chlorine, which is prohibited for use as a weapon, even if chlorine is not prohibited to possess.)

This wouldn’t be the first time Syria has been caught cheating. In October of last year Syria admitted to having four chemical weapons facilities that it had not previously declared. Worse than that, The New York Times reported in January that the administration had informed Assad that the United States will train rebels to fight ISIS, not Syria.

So how did Obama announce the deal?

I welcome the progress made between the United States and Russia through our talks in Geneva, which represents an important, concrete step toward the goal of moving Syria’s chemical weapons under international control so that they may ultimately be destroyed. This framework provides the opportunity for the elimination of Syrian chemical weapons in a transparent, expeditious, and verifiable manner, which could end the threat these weapons pose not only to the Syrian people but to the region and the world. The international community expects the Assad regime to live up to its public commitments.

While we have made important progress, much more work remains to be done. The United States will continue working with Russia, the United Kingdom, France, the United Nations and others to ensure that this process is verifiable, and that there are consequences should the Assad regime not comply with the framework agreed today. And, if diplomacy fails, the United States remains prepared to act.

Following the Assad regime’s use of chemical weapons to kill more than 1,000 men, women, and children on August 21, I decided that the United States must take action to deter the Syrian regime from using chemical weapons, degrade their ability to use them, and make clear to the world that we will not tolerate their use. In part because of the credible threat of U.S. military force, we now have the opportunity to achieve our objectives through diplomacy. I spoke to Secretary Kerry earlier today and thanked him for his tireless and effective efforts on behalf of our nation. I also spoke to Ambassador Samantha Power who will ably lead our follow-on negotiations at the UN Security Council in New York.

Sentiments similar to those in the two phrases bolded above are regularly said by the President and the administration official regarding the nuclear deal with Iran. The president insists that the deal with Iran will be verifiable, and that Iran will be subjected to unprecedented inspections and that any violations will be met with a snap back of the sanctions regime.

But when we see that there are no consequences to Syria for violating a verifiable deal to get rid of its chemical weapons, what lesson should we draw about future violations by Iran of any deal that it agrees to regarding its illicit nuclear program?

After Obama failed to react to Syria’s deadly use of chemical weapons, crossing a “red line” as the president put it, I wrote, “the only people whose interpretation of the ‘red line’ comment matter are Bashar Assad and Ali Khamenei.”

Q: But when we see that there are no consequences to Syria for violating a verifiable deal to get rid of its chemical weapons, what lesson should we draw about future violations by Iran of any deal that it agrees to regarding its illicit nuclear program?

A: But this time it will be different! Swearsies!

This can’t be correct. John Kerry said the Syrian WMD deal was a success and the process complete.

Oh, darn! Maybe he was wearing his magic hat when he said it.

Ps. Obama can’t even verify a deal in a country where the government isn’t in control of all the territory and can’t stop inspectors from going wherever they wish.

But I guess the mullahs are more trustworthy, right? Since they have done nothing but lie, cheat, deceive, and murder since taking over in 1979?

Maybe now we can begin to understand why the Shah, who brought Iran into modernity and was Israel’s strongest ally (including the USA), was so ruthless in suppressing the radicals.