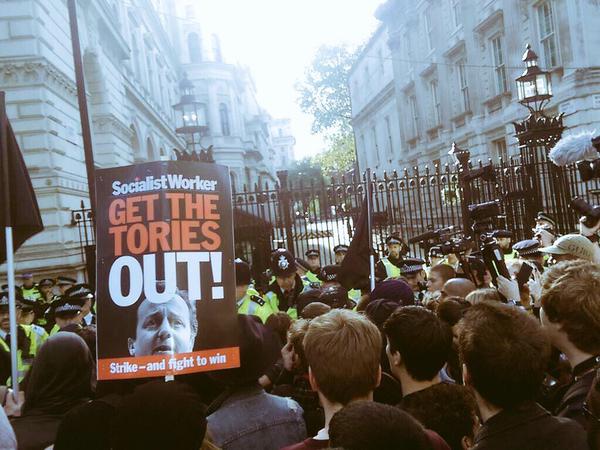 Best of all, George Galloway and his merry band of Jew-baiters and anti-Israel maniacs were voted out.

With a Conservative Party majority, welfare and other fiscal reforms should pass.

That has the sore election losers unhappy.

Needless to say, not all of the tweets and text below are safe for work:

Downing Street has condemned the defacing of a war monument on Whitehall by anti-austerity protesters as “despicable”.

The words “f*** Tory scum” were daubed in red paint on the Women’s War Memorial in Whitehall on Saturday, just a stone’s throw from a VE Day celebration concert at London’s Horse Guards Parade.

Four police officers and one other member of police staff were injured, with two needing hospital treatment, as campaigners descendedon Downing Street to protest against the new Conservative government. 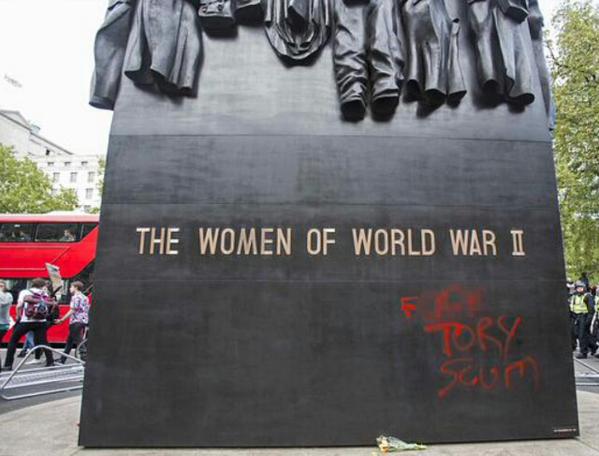 Worst of all, the protesters wasted food:

Some protesters hurled biscuits, cups and paper planes at the police as they were driven away from Downing Street, chanting “get the Tories out” and “power to the people”.

Protesters are throwing biscuits at us https://t.co/A4jFZXRKBO

Here are some more:

The BBC isn't even reporting on this protest so let's make people aware #ToriesOutNow pic.twitter.com/Sa4Pprgt55

And yes, there was mockery of the protests:

Seems the whining #loser losers of #londonprotest don't realize how idiotic they look to the rest of the world. pic.twitter.com/KzI4OzsKCz
— Tammy Bruce (@HeyTammyBruce) May 10, 2015

What's really great about the #londonprotest: the participants have absolutely no idea how loathsome and stupid everyone else finds them.

So the left gets trounced in election and immediately starts #londonprotest what a bunch of whiners.
— The Doctor (@Pursuit_of_God) May 10, 2015

Attn socialists … “Elections have consequences”. I know you’ve heard that one before.

I almost tweeted that exact phrase: Elections have consequences. Heh.

Yep. As I’ve often observed, Collectivists HATE democracy, and are happy to impose their totalitarian rule via the mob. Or any other means they find useful, including and especially lies.

Nothing says “Trust Our Side in Power” like desecrating a WWII Monument.

Think this is bad? Wait until November 2016.

Those on the Dole in London are upset because the rest of the country is finally being heard.

These raging Socialists are ever so lucky! They lost and will not now run (Really, ruin) that country. So, they shall have numerous opportunities to object, rage, and howl against the Conservative PM and his government.

If these blooming UK Socialists had won, they would have dug Britain’s hole in the mud deeper and deeper until it would collapse unto themselves. They will never realize how lucky they are.

Of course, this election also means that the Conservatives are the best of show and can now raise the UK economy upwards; presuming they don’t in fact FU and try to emulate MIlbrand’s Socialist idiocy.

Well on the upside, there are some cute girls in those pics. I’ve always wondered how many guys go to protests just to pick up girls, and don’t even know what they’re protesting.

Lots of good twitter comments too; IowaHawk’s was perfect.

It’s simple: take away the welfare benefits given to these morons. They’ll then be too busy working to make trouble in the streets.

So what you’re saying is, “To Dickens with the protesters,” right?

What I’m saying is that when life gives you biscuits, eat them…w/gravy, eggs over easy and a dash of Tabasco.

I heard the Labour Party paid Axleweenie almost 500G to be a consultant on the election.

This book explains all: The Liberal Mind: The Psychological Causes of Political Madness — http://www.libertymind.com/.

The way to deal with Lefturds is with violence. Smash in their faces. Crack their skulls. Kick in their ribs. Drive them from the streets with fire hoses. Shoot the violent ones down.

Lady Thatcher summed it up nicely in her famous quote about socialism almost 40 years ago. Liberals are not compassionate, they are greedy pigs. They know the right course for the country, but to achieve power they promote populist policies that are long term destructive.

Q: There are those nasty critics, of course, who suggest that you don’t really want to bring [the Labour Party] down at the moment. Life is a bit too difficult in the country, and that … leave them to sort the mess out and then come in with the attack later … say next year.

A: I would much prefer to bring them down as soon as possible. I think they’ve made the biggest financial mess that any government’s ever made in this country for a very long time, and Socialist governments traditionally do make a financial mess. They always run out of other people’s money. It’s quite a characteristic of them. They then start to nationalise everything, and people just do not like more and more nationalisation, and they’re now trying to control everything by other means. They’re progressively reducing the choice available to ordinary people.

Yesterday will go down in British history as “The Day Of The Cookie”.

And, to think, a generation or two is all that separates these spoiled brats from the people who withstood the Blitz and went on to win.

It is pretty shocking how smooth that decline is. Almost like skiing straight downhill.

Until you hit the tree!

Did you and Rags miss the Election Night Special? Biscuit Barrel won!
https://www.youtube.com/watch?v=kJVROcKFnBQ

The utter cluelessness is breathtaking. (See what I did there?)

I was going to say something about desecrating WW2 memorials, but I won’t.

“What’s really great about the #londonprotest: the participants have absolutely no idea how loathsome and stupid everyone else finds them.”
Not everyone: My liberal “friends” have endless sympathy and excuses.

I’m just happy to see all the hormonal Lefties out in the fresh air. It is also a relief to see that not all the mobs of Rent a Reds are in the US. They are a hoot no matter the continent.